Rossetti and the allure of the Pre-Raphaelite woman 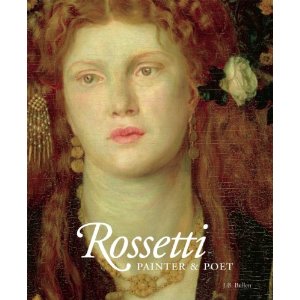 If you were to have asked around the art circles of Europe in the last decades of the 19th-century what was the most important movement in contemporary art, you would not have been told ‘Impressionism’ nor ‘Pointillism’ but ‘Symbolism’, and if you were then to ask who were the most influential originators of that movement, you would probably have been told, the British artists, Edward Burne-Jones (1833–98) and Dante Gabriel Rossetti (1828–82). The dominating theme of Rossetti’s art was love and desire, and his subject, almost exclusively, the mysterious enigma of woman as seen through the male eyes of the time.

It is rare for the languages of poetry and painting to coexist so equally in the art of a given individual. Blake is one of the few comparisons that come to mind and it is significant that Rossetti was unusual in recognizing his importance at a time when he had largely disappeared from notice.  J. B. Bullen has taken on the valuable task of presenting the two modes of expression in a single book, enabling a much more complete and sympathetic understanding of his ideas. But by its very nature the book has been restricted on occasions to illustrative fragments of lengthier poems and it would have been good to have had them printed in their full length in an appendix.

Much of Rossetti’s notably un-English character can be explained by his origins. His mother was half Italian, from a family of political exiles, as was his Italian father, a prominent activist and scholar, writer of patriotic songs, who had had to flee his native country under threat of his life.  Although Rossetti enrolled for the conventional courses of art training at the Royal Academy, he was neither a successful nor an industrious student, and some of his early pictures reveal technical problems in perspective and compositional grouping, but he makes a virtue of this by emulating certain mediaeval and early Renaissance pictorial modes, which emphasized the decorative and the gestural over the naturalistic imperative.

Along with fellow Royal Academy students, John Everett Millais and William Holman Hunt, he formed the Pre-Raphaelite Brotherhood largely in protest against what they felt was the complacent, crowd-pleasing but shallow direction that typified British art of the day.  They also had stylistic concerns and wanted to return to a simplicity of line and colour that they found in Italian art prior to the sophistication of the High Renaissance, typified by Raphael.  But it was never a proscriptive programme and Rossetti himself soon adopted a share of the pictorial values of Titian.

The other major challenge that Bullen successfully pulls off is to entwine the thread of the artist’s biography and emotional life within the account of his poetry and painting.  In fact, any decision to avoid this approach would be fundamentally false, when much of his poetry in particular is so demonstrably driven by his confused encounter with the force of his passionate desire in conflict with his guilt and regret in the face of its consequences.  Two instances dominate this story, the first, the tragic case of Elizabeth Siddal, the model and muse whom he married in 1860, and Rossetti’s reprehensible treatment of her; the second, Jane Morris, the wife of his erstwhile close friend, William Morris, with whom he openly engaged in an adulterous relationship.  The personal information is crucial to understanding his painting since the two women were central to its development, as the models who contributed most to the image of the female by which today his work is instantly recognized –  ’not as she is but as she fills his dreams’ – according to his sister, the poet Christina Rossetti.

Bullen writes attractively and accessibly and draws on a copious knowledge of the art and literature of the period as well as the social, moral and religious debates that informed the contemporary reactions to his work. The book is well designed and fully illustrated. London’s Tate Britain gallery is to mount an exhibition of the Pre-Raphaelites in late 2012.