Restored to life - the Watts Gallery 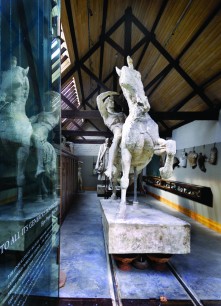 It was a fine early Autumn day, a little blustery but warm, when I and three friends – Janice, Liz, and Ros – visited the Watts Gallery in  the quaint country village of Compton in Surrey. We began with a light lunch in the (licensed) tea rooms behind the gallery entrance and shop, itself housed in the old pottery building.  There was a varied menu at reasonable prices, so indoors every table was taken, with further patrons out on picnic tables. How gratifying that the newly refurbished gallery is attracting such good numbers, and, as Liz remarked, that they are respectfully quiet, allowing us to enjoy both lunch and the works on display as they should be enjoyed.

George Frederic Watts (1817–1904) shared a birthday date (23 February) and the Christian names of the composer Handel (his father was a piano-maker). He excelled at painting from an early age and had entered the Royal Academy Schools by the time he was 18. By the end of his life, aged 87, he was wealthy, famous, and critically acclaimed. Regrettably, the 20th century saw him fall out of favour with both critics and public, so that 100 years after his death, the gallery that he established and bequeathed to the nation had fallen into disrepair, with leaking roofs, neglected art-works, inaccessible galleries, and precious few visitors.

After lunch, our little group sauntered up to the lawns outside the gallery entrance, to admire and photograph the monastery-like single-storey building surrounded by trees and shrubs. On entering you are immediately in the Livanos gallery, one of a complex of four galleries at ground level, each now named after their recent benefactors. In three of them is a representative selection of Watts’ work, newly lit, but, as one of my party remarked, some could do with a good clean. In the Graham Robertson gallery were examples of the many portraits of the great and good of Victorian times for which Watts was famous: not only Tennyson, Browning, Gladstone, Carlyle, Rossetti, Cardinal Manning and the like, but also The Hon. Mrs Percy Wyndham, Miss Edith Villiers, the Countess of Leinster, Mrs Thoby Prinsep and many more. Watts lived with the wealthy and bohemian Prinsep family in Little Holland House, in London, for over 20 years.

Watts derived his fortune from his portraits. Status and wealth allowed him to pursue his own artistic inclinations, which were those of Symbolism, following on from the Pre-Raphaelites. When the four of us moved through a portal to one side of the main complex, we arrived in a tiny gallery, almost in darkness, except for the lighting that revealed Watts’ best known work, called simply Hope, on loan for this exhibition from a private owner. The striking figure of a young woman sitting upon a globe, plucking the last string on an ancient lyre, and leaning close in the hope of hearing its note, all set against a blue-green background, is an iconic painting, and its title was used, fittingly, for the five-year restoration project, which was completed by June 2011. Substantially funded by the Heritage Lottery Fund, it also attracted many other benefactors. The donors list runs to more than 30 names.

Watts’ first marriage in 1854 was to the budding actress Ellen Terry. She was just short of 17, whilst he was 47. Unfortunately, she ran off with another man within the year, though it took more than a dozen years before they were divorced. At the age of 69 he married again, to Mary Fraser-Tytler, aged just 36, although they had known each other for many years, and it appears she was the prime instigator of the marriage. This time it was more successful, and with her, Watts moved away from London, to set up home in Compton, in a house designed for them by Sir Ernest George. They called it Limnerslease, combining the Latin for artist with an old English term for harvest. Close by, Watts had built the gallery that we were visiting.

Descending some steps from the Showcase Gallery (there is a lift), we reached the Exhibition Gallery, in which were a number of Watts’ best-known works, on loan from Tate Britain. From his death to the start of the Second World War, Watts had his own gallery at the Tate, but it was never re-established after the war, signifying his fall from favour. Here on display were The Minotaur, The All-Pervading, and Oscar Wilde’s favourite, Love and Death. Kept in pristine condition, as one would expect from the Tate, and well lit, they amply demonstrated Watts’ skill, imagination, and the reason for his fame. Also on show was a bronze bust of Watts himself, wearing his habitual skullcap, an homage to Titian. The cap itself, kept by Mary as a souvenir, is in a glass case along with other artefacts in the sunken Richard Jefferies Gallery, opposite the entrance.

Beyond the Exhibition Gallery, through a short passage, is the Sculpture Gallery, and the four of us were taken aback by what we found there. Before us was a gigantic 20-foot high statue of a naked rider on horseback. Named  Physical Energy,  it was Watts’ tribute to history’s men of action. Made from a mixture of plaster, glue and chopped hemp, it was the plaster cast for a number of bronze statues, including one in Kensington Gardens, London. It is placed on a trolley on rails, and fronted by ceiling-high glass double doors. The rails extend outside so that in fine weather, the entire statue can be rolled out into the open air. Even as the four of us viewed it, a group of students on the grass hillock outside were sketching the remarkable statue. Behind it was another wonder: a huge statue of Watt’s great friend, the poet, Alfred, Lord Tennyson, perhaps ten feet high, contemplating the flower in his hand, his faithful dog Karenina at his side. The bronze version is now in Lincoln Cathedral.

The Watts Gallery has placed itself in the hands of the well-established publishers Philip Wilson. Not only have they produced the excellent 64-page gallery guide (just £5), but two further books: An Artist’s Village: G.F. & Mary Watts at Compton, and The Watts Cemetery Chapel. All three are beautifully illustrated, with informative narratives, mostly compiled by Mark Bills, curator of the gallery. An Artist’s Village tells of the impact of  the Wattses’ descent upon what was then a sleepy village; the erection of Limnerslease, the gallery, pottery and chapel. The last book describes the extraordinary creation of Mary Seton Watts, the cemetery chapel.

The newly restored Watts Gallery is running a full programme of events, with study days, lunchtime talks and adult art classes. There is an art club, and family workshops, and guest speakers such as Lucinda Lambton and Lynne Truss, as well as an artist in residence, Deborah Gourlay. The current exhibition runs to the end of the year. In January there is an exhibition of work by prison inmates and others, called ‘The Big Issues’, and that is followed from February to June by ‘The Hall of Fame’, a display of more than 100 of Watts’ portraits. There is a quarterly magazine, and all the information you could wish for on the gallery website: www.wattsgallery.org.uk.

Leaving the gallery, the four of us were posed with the question: should we bother with Mary Watts’ cemetery chapel? We wandered down the road a bit, looking for a sign. A stranger indicated the direction, with a curt ‘...a few hundred yards’. I decided to take no chances and retreated to the car park for transport, so that when I arrived at the delightful gardened cemetery,  chapel hidden in the trees, my companions had already experienced the startling sight that greets visitors. A small, circular, redbrick building, with buttresses to form corners and an entrance, the exterior is charming enough. Inside, in semi-darkness, with light only through the narrow stained-glass windows and a couple of feeble bulbs, are walls and ceiling illuminated with a multitude of decorative tiles and mosaics. As our eyes became gradually accustomed,  we could see the delicacy and intricacy which Mary Watts had elicited from the villagers and students who fabricated the work in her pottery. The well-illustrated PhilipWilson book provides an excellent guide to this wonderful and entrancing edifice.

Whilst Ros was attempting to take photos with her mobile phone, the heavens sprinkled a shower of rain, so it was a scramble down the incline to pile into my conveniently parked car, and back to the main complex. Liz and Ros decided to take tea before leaving, but Janice and I were ready to get on our way after what had turned out to be an enthralling, enlightening, and invigorating visit