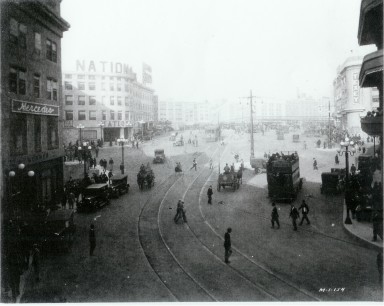 When the restored version of Abel Gance’s Napoleon (1927) was shown at the Empire Leicester Square in 1980, director Alan Parker was so struck by its technical exuberance that he stopped production on his film The Wall (1982), and reshot a swimming pool scene using a pendulum in the studio roof in the same way as Abel Gance.

This example of the  influence of a classic forerunner on a modern director is far from unique. I remember working on The Charge of the Light Brigade in the 1960s. Tony Richardson had filmed a superb charge, but the Russian cannonade looked anaemic. A cannon firing a live round leaps back alarmingly. A cannon without recoil merely seems to be squirting smoke.  I told Tony what I felt, and I remembered a sequence of a cavalry charge from a French silent called The Chess Player (1926). I brought my projector to his office and showed it to him. ‘Say no more’ he said. He ordered a set of cannon with hydraulically operated recoil and reshot the scene on Chobham Common. The cannon behaved perfectly, as did the (real) Russians firing them.  And when I’d cut them in, the shots made all the difference to the sequence.

Virtually every visual advance in the cinema, except CGI, was developed in the silent days. It was a period of feverish experimentation and artistic dedication which occurred at the same time – and often at the same studio – as crass commercial exploitation and boneheaded supervision. But for all the stillborn masterpieces, there were innumerable films that can still be watched with delight and admiration today.

In the 1980s and ’90s, I worked with David Gill on a series of silent restorations sponsored first by Britain’s Thames TV and then by Channel 4 and shown with live orchestra at big West End theatres during the London Film Festival. We invariably got full houses and critical raves – until a new man arrived at Channel 4 who saw no value in the series and scrapped the whole thing after a final, triumphant show. The series had lasted 19 years.

The silent film was once the most powerful cultural influence on the planet, exceeding even that of the press. Producer-director Cecil B. De Mille simply had to show a bottle of perfume on the screen for it to sell out in every store that carried it. The movies dictated fashion, and not only for women. Actors found hard collars too hot in California. The celluloid collar trade died out rapidly as the males in the audience  switched to the soft collars they saw their screen heroes wearing.

Regret for the passing of the silent film is no longer regarded as a symbol of advancing age – look at the reviews for the new film, The Artist, about a star of silent movies. This art form has acquired a legion of admirers in the last few years. The Silent Film Festival in Pordenone, Italy, attracted seven delegates when it started, 30 years ago. Now it gets over 700. And there are silent festivals in Bologna, San Francisco, London and even Bo’Ness, Scotland.…

Watching a brilliant film in a good print on a big screen with live orchestra and a sympathetic audience – that’s called cinema and there is no entertainment like it. Many future filmmakers lucky enough to have lived through the silent era – either as children or young technicians – were responsible for the films of the 1930s, ’40s and ’50s. Again and again, you see references, conscious or unconscious, to the films they saw in their youth.

Funnily enough, Sunrise wasn’t thought of as a silent, but as a sound film – when audiences knew the difference between sound and talkie. Its sound track is almost as important, historically, as that of The Jazz Singer,  thus it is a cultural crime to show it with an electric guitar accompaniment, as happened recently, or even with a piano.  The score, composed by Hugo Riesenfeld, consisted of symphonic music and sound effects. It was intended to show the future for sound films, as opposed to talkies. Sound films were movies accompanied by music and effects but without dialogue. Talkies were talkers. But The Jazz Singer, which came out the following month,  combined the two great loves of American audiences – radio and motion pictures – and was a smash hit.  Sunrise was too poetic and high-minded to be successful commercially

Sunrise was perhaps the silent film with the greatest influence.  Christopher Frayling told me that he met Alfred Hitchcock when he visited Cambridge. ‘I don’t know what made me do it,’ said Frayling, ‘but I hummed the Hitchock TV theme. And  the great man intoned ‘Sunrise’.  Sure enough, you can hear the tune in the sequence when Janet Gaynor and George O’Brien are in J. Farrell MacDonald’s studio. George O’Brien, the son of the police chief of San Francisco, had been a camera assistant when John Ford cast him in the lead for The Iron Horse (1924). Janet Gaynor had also been in westerns before being starred in The Johnstown Flood (1926). This was their first ‘art film’.

Sunriseaimed to be ‘pure cinema’. Its script was written by Carl Mayer, author of The Cabinet of Dr Caligari (1920) and The Last Laugh (1924). German genius combined with Hollywood brilliance to produce certainly the greatest American silent film I have ever seen.

Sparing with its titles, Sunrise is a perfect blend of imagery and information – and yet if you read Mayer’s script you would hardly think it would make an acceptable picture, let alone a masterpiece. For this story of a peasant marriage ruptured by a temptress from the city was written in blank verse. It had none of the comedy of the final film – Fox must have made it clear that Murnau’s film was too bleak.  A former cartoonist, William Conselman, was brought in and credited as ‘Comedy Constructor’. Murnau, separated from his writer by 6,000 miles, must have thought he was betraying Mayer when he agreed to add the comedy. And Mayer was predictably indignant when he saw the results. I suspect this is what blackened the picture for the highbrow critics in Europe. But it all works deliciously today – even a scene with a drunken pig.

Murnau had directed The Last Laugh (1924), so revolutionary in its technique that it changed the look of American films, making the camera much more mobile. He was given carte blanche by William Fox and he spent a great deal of Fox’s money. Intriguingly, he chose Mary Pickford’s camera crew – Charles Rosher and Karl Struss – and it is a tragedy that no original print survives to demonstrate the high standard of their work. But even in the copies shown today, the mastery that won the two men the first Academy Award for cinematography is apparent. (Sunrise won three Academy Awards altogether)

This story ‘of no place and every place’ required a square large enough to suggest the country peoples’ impression of the vastness of a modern city. Art director Rochus Gliese built at the Fox Hills studio a gigantic set, complete with streetcars. It required the biggest call for extras in the studio’s history. It was laid out with elevated railway and vast buildings put up in false perspective; adult pedestrians walked in the middle distance. In the background were children and midgets.  It was built on the very site where Century City stands today.

The film was notable for its daring experimentation. Janet Gaynor recalled Orson Welles telling her ‘I’ve been seeing a lot of you recently’. He and Gregg Toland had been running Sunrise over and over, particularly intrigued by the deep-focus shots, such as one with a tumbler of water in the foreground and the rest of the room in the background, still in sharp focus. Welles’  Citizen Kane (1941) is famous for its depth-of-focus shots.

The effect of  Sunrise was first felt at Fox, where John Ford, Howard Hawks and Frank Borzage were immediately affected.  Not only did John Ford launch himself wholeheartedly into Murnau country with Hangman’s House (1928), in which Ireland resembles Bavaria, he used the Sunrise sets in this and in Four Sons (1928).

Frank Borzage was the most successful practitioner of the Murnau style. He was so impressed by Janet Gaynor he cast her in 7th Heaven (1927), which also reused the Sunrise sets, and Street Angel (1928).  Whether seriously intentioned or not, theSunrise effect even infiltrated westerns, and the Henry MacRae feature Wild Blood (1928), the story of two horses, was filmed as though Murnau was behind the camera.

One critic reviewed the premiere, but was less impressed by Sunrise than by the Movietone interview with Signor Mussolini that accompanied it.

It must be hard for film critics to imagine that their considered reviews might read absurdly in years to come. ‘The sort of picture that fools highbrows into hollering ‘art’!’ said Photoplay. ‘A masterpiece of bluff insincerity, insubstantial nonsense’ wrote Paul Rotha in The Film till Now. The highbrow magazine Close Up called it ‘depressing.  They try to please Europe by aping its tricks’. As George O’Brien said ‘It was surprising how unprepared the critics were. The film was 20 years ahead of its time’.

At least D W Griffith selected it as one of the 50 best films ever made. And as we have seen, King Vidor chose it as his favourite film. And Sunrise, a flop when released, was hailed in 1967 as ‘the single greatest masterwork in the history of the cinema’ by Cahiers du Cinema.

Author:
Kevin Brownlow
Location:
Photoplay Productions, London, UK
Role:
Film maker, editor and historian
Books:
Kevin Brownlow began working with film in his teens, directing It Happened Here, which was finally released in 1966. In 1968 he published a book, How It Happened Here, recounting how the film was made. In the same year he also published The Parade’s Gone By, the first of a number of books on silent and later film. He has restored many silent films so that they can be seen and enjoyed today, and made a number of documentaries about film. In 2010 he was awarded an Academy Honorary Award ‘for the wise and devoted chronicling of the cinematic parade’.

BUY It Happened Here (DVD of film) FROM AMAZON

BUY The Parade's Gone By by Kevin Brownlow FROM AMAZON

BUY Winstanley: Warts & All by Kevin Brownlow FROM AMAZON

Kevin Brownlow directed the films It Happened Here and Winstanley (both now available on DVD), subsequently publishing books about the making of both these films. He has written and contributed to many other books, including: