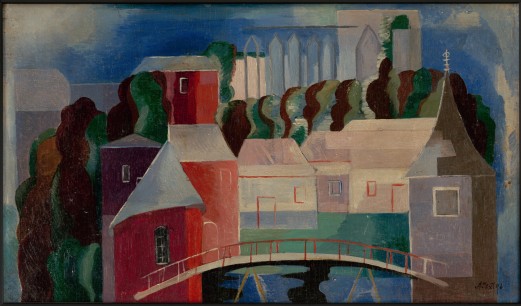 Most of the Russian avant-garde artists never had a retrospective exhibition in Russia during their lifetimes. Vasily Kandinsky, Aleksandr Rodchenko and Varvara Stepanova combined to show large groups of their most recent work in the spring of 1920. Kazimir Malevich’s ‘retrospective’ exhibition in 1929 covered his development from Impressionism to his Suprematist peasants and portraits, but most of the works were painted for the occasion to conform to a ban on abstract art. Politics and the new art did not mix well in Revolutionary Russia after the mid-1920s, the time when these artists were reaching their creative prime as innovators.

For her part, Alexandra Exter (1882–1949) was honoured with a modest retrospective in Moscow within the 1917 ‘Knave of Diamonds’ exhibition, where she showed 67 canvases listed in the catalogue under the single title, ‘Paintings 1907–1917’. She had exhibited regularly in group shows in Petrograd, Moscow and Kiev from 1907 to the early 1920s and was praised in the Kiev press for her Impressionist and especially her Cubist painting, while she was highly acclaimed for her theatre productions for Alexander Tairov’s Chamber Theatre in Moscow in 1916 (Famira Kifared), 1917 (Oscar Wilde’s Salome), and 1920–1 (Romeo and Juliet). Her abstract painting between 1912 and the mid-1920s, on the other hand, was little commented on in the Russian press and the real extent of it was hardly known.

Her works had, however, been purchased by a new initiative that followed the October Revolution of 1917. This was the creation of the Museum of Artistic Culture, a network of collections within over 30 museums across Russia of the newest Russian art.  Over 3,000 works by around 150 artists had been purchased between 1919 and the early 1920s by the Purchasing Committee within the Museum Bureau in Moscow, headed by Vasily Kandinsky, followed by Aleksandr Rodchenko. Petrograd had its own Museum Bureau and Purchasing Committee. Just under 30 paintings by Alexandra Exter are known to have been purchased for the Museum of Artistic Culture, and these are today in museums across Russia.

Because of the status of her reputation she was appointed to the delegation of the Russian Section at the Venice Biennale of 1924, to be followed by a similar appointment to the Theatre and Film section of the Russian Pavilion at the International Exhibition of Decorative Arts in Paris in 1925. By the end of that year she and her husband had decided not to return to Russia, owing to reports of increasing political repression. State intrusions into the arts – not only the plastic arts but also literature, music and theatre – soon led to censorship of all kinds. By 1932  Stalin had issued a decree that made abstract (called ‘formal’) art illegal. Art was now to be an instrument of the state, i.e. propaganda. This applied to all the Russian avant-garde artists, of course.

So from that time to the fall of the Soviet regime in 1991 the name and art of Alexandra Exter were banished from the annals of art in Russia.

All the paintings that had been purchased by the Museum of Artistic Culture were ordered to disappear from view into the reserves of the museums – if not stamped with ‘of no artistic value’ and ordered to be burned. There were many other works, however, that had hung in the art schools and the Institutes of Artistic Culture in both Moscow and Leningrad and that had been used for teaching and research purposes. This was a kind of parallel collection and it came to constitute several thousand works by Russian avant-garde artists and their students. By 1930, these works had been transferred to the Depository for Contemporary Art in Moscow. This storage had originally been created in the early 1920s on the initiative of the architect and painter, Nikolai Vinogradov, member of the Museum Bureau, to house works of artists who had died, such as Olga Rozanova in 1918, or who had left Russia, such as Natalia Goncharova and Mikhail Larionov, Natan Altman, Marc Chagall, among others.

As Alexandra Exter had not left Russia in 1924 with the intention of emigrating, works from her studio in both Moscow and Kiev were subsequently transferred to the Depository for Contemporary Art by her friends where they were kept safe, but in hiding, for the next 50 years. Only since ‘formal art’ wasrestored to being ‘legal art’ in 1991 have Exter’s hidden works held in the Depository slowly begun to reappear in the public eye, along with works by all the other artists.

There is a similar story in the West about Exter’s fame, then fate. She had been well known in Paris before the First World War, travelling in the Cubist circles of Picasso and Braque, Fernand Léger and Jean Metzinger, as well as in those of the Italian Futurists, and had exhibited in Paris and Rome. By the times she returned in late 1924 all that she had achieved in her Russian abstract, non-objective painting was unknown in the West. In the late 1920s and ’30s she took part in Parisian Purism, exhibited, had commissions for textile designs and books, and taught both in Léger’s Académie Moderne and in her own theatre design studio. She was known, but the art scene in Paris was also afflicted by the political situation in the late 1930s and the subsequent war.

So when, to celebrate the 50th anniversary of her death, the first major museum exhibition of Alexandra Exter’s painting took place in 2009 at the Chateau Musée of the city of Tours, south of Paris, this was Exter’s first large-scale show in Europe. Much of the work came from the artist’s studio, which had been in the keeping of the executor of her estate, who had owned a fabric shop in Paris and sold it (around 1980) to a Paris dealer, Jean Chauvelin. Having published a fine monograph, Alexandra Exter, in 2003 – the first of its kind in the West – Chauvelin then presented an exhibition of works that were being seen for the first time, and it also contained some works from the Depository of Contemporary Art. Exter’s abstract, non-objective painting in particular revealed phases of her work known to have been missing, and thus began her rediscovery. It was a beautiful show.

Then in 2010 her second major museum retrospective, ‘Alexandra Exter’, took place at the Museum of Modern Art in Moscow. Exter’s formerly hidden works, which had been purchased by the Museum of Artistic Culture, were brought together again and there were also works belonging to private collections in Russia. Thus for the first time the largest number of Exter’s paintings of all trends were shown in a Moscow museum. Finally, Alexandra Exter was visible again in Russia, able to reclaim her fame in the widespread acknowledgement of her extraordinary inventiveness as a painter and as a designer for the theatre.

This exhibition was curated by the Moscow art historian, Georgii Kovalenko, well-known for his previous publications on the artist. Kovalenko’s two-volume study, Alexandra Exter, was published on the occasion of the exhibition and it is a highly authoritative account of the artist’s creative development as a painter, as a theatre designer, and as a book designer.

Volume One is devoted to Exter’s work from around 1905 to the early 1920s. Her Impressionism, Cubism, Cubo-Futurism, and Non-Objective painting is discussed in detail. The author traces Exter’s artistic creativity from her inspiration by the Parisian Cubists through to her artistic initiatives in Moscow, leading the way in new ideas in abstraction. The volume closes with a large section on Exter’s work for Alexander Tairov’s  theatrical productions. Her fantastical costumes show why she was one of the most acclaimed designers for the stage at the time.

Volume Two is devoted to Exter’s work from the early 1920s to the end of her life. The volume closes with an extensive number of documents including letters, memoirs and articles and an in-depth chronology. Relying on all the available resources and archives in Russia, as well as some abroad, Kovalenko’s major study is an important and in-depth history of the art of Alexandra Exter.

Although Exter never ceased to work and never ceased to exhibit, political times in Russia and the West conspired against her achieving the recognition that the sheer beauty and innovative power of her work deserved. Now, just over 50 years since her death, Alexandra Exter returns fully to take her rightful place in the history of Russian avant-garde painting, theatre and film.

BUY Amazons of the Avant-Garde FROM AMAZON

For a biography of Alexandra Exter see the InCoRM website.

Alexandra Exter’s work was included in the 1999–2000 touring exhibition, ‘Amazons of the Avant-Garde’, which was shown at the Deutsche Guggenheim, Berlin: the Royal Academy of Arts, London; the Penny Guggenheim Collection, Venice; and the Solomon R. Guggenheim Museum, New York.  A catalogue was produced for that show.