Richard Hamilton and the fine art of mass media 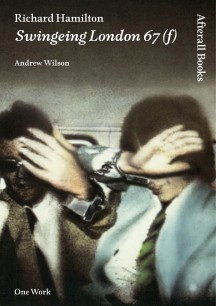 In the late 1960s, the British artist Richard Hamilton was quoted as declaring, ‘fine art is the medium in which I work; the mass media is [sic] often the content of the painting’. This statement affirmed an aesthetic sensibility first expressed in the 1950s by the Independent Group, of which Hamilton was a member.  Instead of conceiving fine art as existing at the pinnacle of culture, the IG insisted that it was only part of a continuum of things human beings made. These things, whether modernist paintings or films intended for a mass audience, were equally a part of the post-war world. They should be judged not in relation to each other, but in terms of the desires they satisfied within highly diversified societies.

Looking back, Hamilton’s statement is both unremarkable in its linkage of fine art and mass media, and somehow diffident in seeming to privilege the former as his primary allegiance. Why affirm the importance of fine art as a form of communication in an age increasingly perceived as defined by radio, television, newspapers, and mass-circulation magazines?  Perhaps the artist meant that his knowingness was not a form of acquiescence. This remains the fundamental tension within Pop art.

A particularly apt moment for thinking about fine art’s immersion in mass culture, while maintaining its options for formal and moral distance, came in the year 1967 – the year of the so-called Summer of Love.  That February, police raided the home of Rolling Stones guitarist Keith Richards, following a newspaper tip off that there were drugs there. Richards, Mick Jagger, and the art dealer who represented Hamilton, Robert Fraser, were charged with possession. All were found guilty following their trial in late June. Given the sensational news that British youth were using illegal drugs, the mainstream media seized on the events to condemn the life-styles of the counterculture, while the alternative press rightly castigated establishment media for creating the sensation, and then using it to foster sales and advertising revenues.

Hamilton channelled his outrage through a series of paintings, prints, posters, and drawings that he cleverly titled ‘Swingeing London’. The adjective was a pun on the concept of ‘swinging London’, the tag by which Time magazine hadregistered its infatuation with emergent youth culture the previous spring. Yet as modified by the verb ‘swinge,’ meaning to beat, scourge, or singe, the title made clear the artist’s sense that the musicians and his friend had been subjected to pillorying because they were young, affluent, and unconventional in their choice of recreation.

Hamilton chose to depict a particular moment in this story – Fraser and Jagger handcuffed in a police van – by taking a well-known photograph and subjecting it to reinterpretation via selective editing and collage overlay. The result, Wilson argues, was to condemn the mainstream media for its cruel harassment of the three; to bring viewers into close proximity with Fraser and Jagger in a moment of vulnerability, thus attempting to evoke empathy; and to insist that art could acknowledge specific events while situating them within a broader context identified by the artist. If Wilson is correct about this – and his argument is quite compelling – then the final work of the series, Swingeing London 67 (f) is not only an example of history painting, but also a defining work of its time.  It thus joins in the counterculture’s attempt to expand the limits of human experience and understanding.

Of course, the past is never as tidy as our arguments make it. Fraser did jail time. Jagger and Richards did not. The former lost his gallery shortly after Hamilton displayed the complete series there in spring of 1969. If anything the case against the Glimmer Twins (a pseudonym sometimes used by Jagger and Richards) enhanced an already burgeoning reputation for scandalous behaviour. So who, in the end, was victimized by the tabloid press? It is not Hamilton’s fault that his series could not anticipate the future history of the band, or of shifting attitudes concerning narcotics. His art was bounded by his experiences of the moment. Yet what can be missed in considering the motivation for the series is that like the tabloid press, the art helped magnify the band’s status, not just as counter-cultural force, but also as a money-making juggernaut. Fine art played its role in this process. It did this not only by rightly criticizing mainstream media, but also by lending its considerable cultural weight to a perhaps otherwise insignificant event that now finds its place firmly fixed in the history of the 1960s.