A century of collage 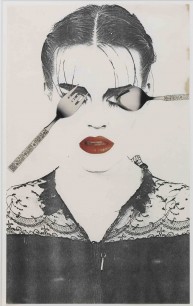 Collage is a 100 years old. In Paris around 1912, Pablo Picasso and Georges Braque invented the technique when they began sticking fragments of wallpaper, cloth and print to their Cubist compositions bringing in elements of ‘reality’ to their art. Collage, in various forms, has continued into the 21st century, with its cut-and-paste aesthetic being particularly apposite to the digital age and its profusion of readily available imagery. Indeed, owing to its ubiquity, longevity and continuing relevance, collage is seen by many as one of the defining characteristics of our culture.

The enduring and multifarious nature of collage is demonstrated by the Arts Council Collection touring exhibition ‘Transmitter/Receiver: The Persistence of Collage’ currently at Woking’s new art gallery and museum The Lightbox (until 25 March 2012). The community-focused and eco-friendly gallery opened in 2007. There is an emphasis on access and education, as Gallery Director Marilyn Scott makes clear: ‘We are extremely passionate about the arts and heritage and even more so about sharing this with our audience. We take pride in making art accessible for all, with learning and education being at the heart of everything we do’.

The Gallery has already collected many awards, especially for its daring architecture. With its glistening skin of gold- and silver-coloured aluminium tiles, the gallery is an impressive sight. Inside, the Lightbox’s architects Marks Barfield (responsible for London’s iconic London Eye) have created two spacious, light-filled main galleries across the two upper floors connected by a dynamic stairway with many attractive views to the outside. Aside from temporary exhibitions, The Lightbox is home to the ‘Woking’s Story’, an interactive display of the Surrey town’s history, and the Ingram Collection of Modern British Art. The latter is particularly strong on early post-war British figurative sculpture by Lynn Chadwick, Reg Butler and Kenneth Armitage.

‘Transmitter/Receiver’ explores the way the collage has developed over the 20th century in British art. It features works by renowned artists such as Ben Nicholson, Eduardo Paolozzi, and Susan Hillier as well as less widely known figures. The exhibition shows how collage has been used to explore different concerns over the years. For example, it has been used by feminist artists to highlight the stereotypical images of women prevalent in the mass media, as with the work of the ‘Hackney Flashers’, a photography cooperative active in the East End of London during the 1970s.

Other artists also use existing imagery or found objects to challenge conventions or to disturb, as in John Stezaker’s unsettling combinations of dissected old postcards such as Mask LXIV from 2007. For I Love King’s Cross and King’s Cross Loves Me, 5 of 2001, David Batcheloruses discarded factory dollies which he found in the King’s Cross area of London – hence the title. The work is topped with bright monochrome panels to make moveable installations akin to constellations of floating mosaics that allude to abstract art and challenge the notion that works of art must be fixed.

‘Transmitter/Receiver’ is accompanied by a paperback booklet which contains a scholarly text, a list of artworks, artists’ bibliographies and colour and black-and-white images of a number of works – some of the latter are thumbnail size and indistinct. In her essay, the show’s curator Caroline Douglas outlines the thinking behind it and discusses the artists represented. Although Douglas rightly argues that collage is a wide-ranging aesthetic in use across many different media, the exhibition does perhaps stretch the concept too far, leaving the uninformed viewer struggling to see a narrative or relation between very different works. To be fair, Douglas states that the intention was not ‘to propose a commonality’. Even so the exhibition brings together an array of extremely disparate art; traditional paper collage, figurative painting, sculpture, photomontage, screenprints, installation art, film and a typically provocative ceramic vase by the transvestite British artist Grayson Perry, who opened the Woking show. Yet this eclectic and thought-provoking show is worth a visit and is free to enter.

A more straightforward, yet very enthusiastic approach to collage for a wider market is Ann Manie’s new paperback Mixed Messages: The Versatility of Collage. Manie, a professional artist and teacher aims to ‘enlighten, delight, inspire and intrigue’ and to a large extent does. Mixed Messages is an attractive, accessible introduction and is particularly suitable for older children and teens as well as amateur artists attempting collage for the first time. Manie’s book is divided into four sections, which are all well illustrated. She opens with a brief historical overview of collage starting with its use in ground-breaking First World War European avant-garde art movements such as Cubism and Italian Futurism, through to 1960s Pop Art, and ends with the contemporary British artist Chris Ofili, whose collaged paintings from the 1990s combined pins, glitter, images from Black popular culture and elephant dung.

The next section consists of profiles of a number of lesser-known present day collagists from America, the Middle East and Britain (including the author, whose profile is the longest). The profiles attest to both the inclusiveness and diversity of the practice, its now global nature and unrivalled ability to juxtapose past and present, the personal and public, and different cultures. A good example is artist Fereydoun Ave. Originally born in Tehran in 1945, but brought up in Britain and educated in America, Ave’s work alludes to Persian culture and history, as in his ‘Rostam’ series of collages from 2010. Although produced using modern ink jet printers, these refer to an ancient tradition of pre-Islamic wrestling heroes.

The third part of Mixed Messages introduces some techniques and materials used in collage, such as chine collé, a type of etching printing using layers of paper, along with rather cursory practical instruction on such matters as mounting and displaying work.The final section features the making of different collage projects by the author. The book also has a list of London-based suppliers of art materials and a short, but useful, bibliography and glossary. The only real gripe is the excessive price for a publication of this size and intended readership, even one so well illustrated.

Have you seen the catalogue? What do you think of the price and the content? Let us know!