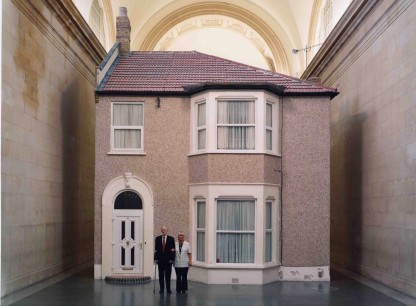 Rosalind Ormiston interviews Jeremy Cooper, author of a new book about the yBas

Jeremy Cooper is a Londoner who read Art History at Cambridge and has since worked as an auctioneer at Sotheby’s; an expert on the first three series of the BBC Antiques Roadshow; the owner of an antiques gallery in Bloomsbury – with Gilbert and George, and the architects James Stirling and Denys Lasdun amongst his clients – and now a successful author. March 2012 sees the publication of his books Artists’ Postcards: A Compendium (Reaktion Books), and Growing Up: The Young British Artists at 50 (Prestel Publishing).

We met at the British Museum to discuss Growing Up. The book follows the history of the ‘yBas’ – ‘young British artists’ – who graduated from London’s Goldsmiths College between 1987 and 1990, and rose to worldwide attention by the end of the 1990s. Many of them are now reaching 50 years of age, an opportunity for Jeremy Cooper, a friend of several of them, to reflect on their success and future prospects. The book contains historical accounts, anecdotes, and remarkable conversations with the artists. Many of the illustrations are personal photographs contributed by the artists and are published for the first time.

Rosalind Ormiston: What made you want to write Growing Up: The Young British Artists at 50?

Jeremy Cooper: Interested in the Goldsmiths Group, I was irritated by the way their early days were written about; that all sense of them as human beings and practising artists had disappeared; so removed from reality. I thought it was important to understand their creative relationships, and set out to check whether their friendships are as significant now as they were then.

RO: The illustrations for this book are remarkable. Many owned by you and the yBas and published for the first time. You include a monoprint drawing of yourself created by Tracey Emin. How did that come about?

JC: I dropped by her studio, which was then in Waterloo Road – she called it The Tracey Emin Museum! – one afternoon in 1997. The door was open and Tracey was sitting on the floor. Whilst we were talking, and I was having a cup of tea, she was drawing. As I left she handed me her sketch, of me. It’s typically generous of Tracey to do that.

JC: It’s dramatic because of experiencing 20 years of really exceptional attention. There isn’t a group of English artists who have, from so young, sustained attention for so long. But it could suddenly turn sour at any time. Could easily be switched off through new interest in younger artists. All the same, I’d be amazed if any of the central five stopped making art.

RO: The book follows the early years of the yBas to the present day. For the five central chapters you chose to focus on Anya Gallaccio, Damien Hirst, Gary Hume, Michael Landy and Sarah Lucas. Why them?

JC: They were five of the original sixteen of the Goldsmiths group who together put on the student-exhibition Freeze. They seemed to me to be representative of the group, although it could easily have included Abigail Lane or Angela Bullock or others. It was a personal decision. I knew it would be interesting talking to them.

It was difficult to get hold of Damien Hirst. He was very busy. But Sarah Lucas and Gary Hume told him about the book and his office got in touch.

RO: What do you think motivated the yBas self-curated art exhibitions in the late 1980s/early 1990s?

JC: It wasn’t to make a revolution. When they were doing the shows they didn’t realize it would be historically important. It’s interesting that it wasn’t about money. The generations after them seem to be more motivated as students by career and money. None of them thought of money. Damien Hirst may do now but he didn’t then. As I say somewhere in the book [about Hirst], if you are a working class lad in Leeds, the son of a single mother, in 1984, when you leave school, if you want to make money, you are not going to go to art school!... He is accused of being ‘pushy, only interested in money’, but if he had just wanted to make money he wouldn’t have done art. He would have been a builder, which he was for two years – working on a building site to make the money to go to art school. Many [yBas] took decorating jobs. Gary Hume didn’t. He just starved!

JC: Yes, because it makes the choice to be an artist more committed. And by now it is interesting how they cope with wealth and whether the threat of its removal matters. I am intrigued by that. Of the ones I know – like Sarah Lucas, whom I didn’t know to talk to at any length until I went to meet her in Suffolk six months ago – she is conscious of the fact that people might stop being interested in her work. It’s important to her that her messages get through in some way, and if they don’t she will be sad but she is resilient, confident that she’ll find a way to make a living. Her commitment is reassuring, I find. The world view is that she is a tough rabble-rouser but in fact she is a gentle, clever woman. She is one of the British stars in the wider art world. Fifty and still very vibrant. I believe in her.

RO: You discuss Michael Landy’s project, Semi-Detached(2004), the I:I scale replica of the front and back of his parents’ house. How does it relate to his other work? For example, constructing such a thing seems the complete antithesis of getting all his possessions together, in Break Down(2001) and destroying them.

JC:   The realization of most of Landy’s projects tends to require considerable support, in money and people. For example, Break Down was put on with the crucial commitment of Artangel, and Art-Bin was financed by Louis Vuitton. Semi-Detached was funded through the Tate and is similar to Landy’s other works in ceasing to exist on the close of the exhibition and in being intensely personal in inspiration. The other day, James Lingwood, co-director of Artangel, said to me that he had come to see Landy as ‘the conscience of the yBas.’

RO:  The chapter on Michael Landy really highlights his gift at catching the public imagination with Scrapheap Services (1995); and 36,000 visitors to Break Down, Oxford Street in 2001; Art Bin in 2010, and Acts of Kindness in 2011. He seems to have become more famous than Hirst. Would you agree?
JC:  Landy is a different kind of artist to Hirst, uninterested in the mindless razzmatazz of popular journalism and he therefore remains much less well known by name to the wider public. It’s terrific that his work itself now receives wide attention, but in many ways surprising that it does, given the concentratedly private nature of its genesis. Whether both, neither or either of these two artist-friends sustain a longer-term impact will emerge in time to come.

RO: Do you think any of the artists have come to regret the label ‘yBas’?

JC:The term, yes, but not the fact. I was slightly surprised. I hadn’t expected them still to be, all of them, so generous to each other, about those times, about the importance to them of those times in the 1990s. They actually feel it. They are aware of the fact that the personal experiences, especially something so powerful as that, at art school and leaving art school in the first few years of trying to make a living and express your work, the support they gave each other, the relationships they had with each other are bound to be important, whether they say so or not. But they do say so. They do acknowledge it.

RO:  Do you think there might be a yBa retrospective exhibition?

JC: No doubt someone wants to do it. I don’t think they would want it. I don’t know. They certainly wouldn’t want to do it themselves; they might lend some stuff to it. They are not particularly proud of ‘Sensation’ [the yBa exhibition of contemporary art held at the Royal Academy, 1997] Personally, I think the ‘yBa phenomenon’ has been overdone. I think we should let the yBas go. That’s sort of what the book is about.

RO: When did you first meet them?

JC: At 44 Charlotte Road [Shoreditch] through Joshua Compston’s exhibitions and street events around Factual Nonsense. He was my tenant, from 1991–6. Actually I really got to know them after he died, as it was I who dealt with his artwork, and with the sorrow of his friends. With my own sadness too. This was when Gavin Turk became a really good friend, and Gary Hume.

RO: In No Fun without You: The Art of Factual Nonsense [Ellipsis Books 2000] you include Gilbert and George, who live around the corner from you in London. Is that how you met them?

JC: No, I knew them before I moved, in 1985, to Shoreditch. We met when I was dealing in 19th-century furniture in my gallery [1979–83], in Bloomsbury [called ‘Jeremy Cooper Limited]. They just walked in. I was so pleased. They are incredibly nice and also incredibly rude! When they first came into my premises they bought an Arts and Crafts table for their house. It was one of the cheapest pieces of furniture I had. They practised telephoning round the table. I was delighted that they asked me if it could be delivered, and said ‘yes, yes!’ and took it down to Spitalfields for them that evening! They greeted me at the door and took the table off me. Carried it in through to the ground floor room on the left, picked up the black phone from the floor, and pronounced it ‘perfect’. It was the only piece of furniture in the room! After that for the next three years they bought all of their stuff from me. Every photograph of them in the house has pieces from my gallery in the background. When I closed my premises in 1983 George said ‘It’s a tragedy!’ I said ‘Well it’s a bit sad’ and he reiterated: ‘It’s not sad, it’s a tragedy Jeremy!’

RO: To conclude, what is your next project?

JC: As a future arts project I’m working with the installation photographer Edward Woodman. And I have an exhibition, ‘The Artists’ Postcard Show’, at Spike Island, Bristol, from 6 April to 17 June 2012. All the work shown will be from my own private collection, including pieces by Tacita Dean, Gilbert and George, Richard Hamilton, Bruce Nauman and Lawrence Weiner, etc. The exhibition links to the publication of my book Artists’ Postcards: A Compendium.

RO: Thank you for talking to Cassone.

BUY No Fun Without You FROM AMAZON