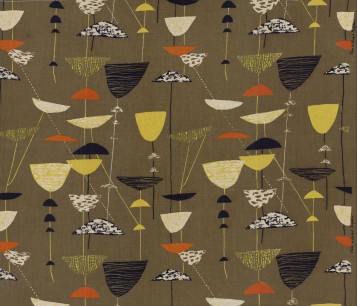 Britain was a drab place after the Second World War.  Having suffered devastating physical and emotional damage during the war years Britons, and their homes, were in much need of a 'lift' as they faced an uncertain future and the daunting task of rebuilding.

Hope and rejuvenation came in the unexpected guise of textile design spearheaded by three women artists – Lucienne Day, Jacqueline Groag, and Marian Mahler – who transformed the drab days after the War with their fresh, progressive designs.  A new exhibition at the Fashion and Textile Museum in Bermondsey, London, ‘Designing Women: Post-war British Textiles’, explores these women's pioneering role in combining art and manufacturing to change the direction of modern design industry, putting Britain at the forefront of international textile design in the 1950s and ’60s.

The exhibition showcases their work and the pivotal role they played in this artistic revolution, beginning with Lucienne Day's avant-garde 'Calyx' pattern of 1951, featured at the Festival of Britain, moving through to textile commissions of the 1960s and ’70s. Their original art designs, with bold abstract pattern and the use of saturated colour, marked a dramatic departure from the conventional furnishing fabrics available.  This new wave of textile designs helped to bring the influences of the art world in their most recent, refreshing and largely abstract forms, into the contemporary home.

Their aim was to create modern, new-look, textiles that everyone could afford.  Of the designers featured in this exhibition, Lucienne Day (1917–2010) was the most successful and prolific female designer of the time.  Best known for creating striking, avant-garde designs to be printed on furnishing fabrics, she also designed wallpapers, carpets and ceramics.  Textiles were her favourite  medium, however, a preference that started while studying at Croydon School of Art (1934–7).  This grew into a passion at the Royal College of Art (1937–40) where she specialized in printed textiles.

Her commercial success began with the ground-breaking‘Calyx’ in 1951. A milestone in the history of 20th-century design it marked a turning point in textile production, with its fusion of fine art and fabric.   Initially Heal’s Fabrics, Day’s principal client at the time, was sceptical about Calyx's ultra modern design, but decided to take a chance on the young designer's innovative and refreshing ideas. This proved to be an astute, and profitable, decision on the part of the manufacturer, as the popularity of this textile launched Day to international stardom in this new era of British design. ‘I was very interested in modern painting although I didn't want to be a painter’, Day said of her design.  ‘I put my inspiration from painting into my textiles’.

Furthermore, she wanted good design to be available for everyone.  For war-weary Britons who were ‘starved of interesting things for their homes in the war years’, as she put it, ‘Calyx’ symbolized a bright and optimistic future with its fresh, organic appeal.  Day's strengths as a textile designer stemmed from her sophisticated colour choices, stylized references to nature, abstract forms and intriguing patterns inspired by modernist painters such as Paul Klee, Kandinsky and Miro.  A gifted colourist, she worked closely with Heal's to ensure that her vision was properly executed in each colour-way version of the final product, and she was one of the first textile designers to be named on the print itself.

This exhibition includes a wonderful selection of Day’s design style over the decades, from the playful linearity of her early 1950s patterns, to her experimentation with bold visual effects using black silk-screen patterns over fields of colour in the late 1950s and early 1960s. ‘Magnetic’(1957), part of a series of purely abstracted designs, had a  linear, geometric style that contrasted with the organic nature of her early designs. Here she explored the graphic character of pattern and how it worked in conjunction with moving fabric.  In the late 1960s and early 1970s she developed a dynamic Pop style.

Day’s wide range included the award winning ‘Chevron’,for which she received the Design Centre Award in 1968. A solid blue and green architectural design, it is quite different from anything else she designed (‘I set out to create a large architectural design with a different direction from the small horizontal or vertical repeat, hence the bold diagonal bars. I visualise it being used not only in large public settings but also in grand private settings’). Much more whimsical were ‘Too Many Cooks’ and ‘Jack Spratt’ (dates unknown): printed linen Fragonard pattern based on the nursery rhyme.
It was progressive textile manufacturers and wholesale firms such as Heal & Sons and David Whitehead Ltd whose support of these young inventive designers, together with the introduction of new technologies, helped put Britain at the forefront of textile design.
Jacqueline Groag (1903–85) was also one of the most versatile female designers after the Second World War. Born in Czechoslovakia, she emigrated to London from Vienna in 1939 after studying with the Wiener Werkstatte, a workshop that focused on high-quality design, both functional and aesthetically harmonious.  Groag adopted these values of 'good design' and developed her own style through drawings and collages.  She produced an array of products including furnishing textiles, dress fabrics, furniture, wallpaper and carpets, working with some of the foremost textile manufacturers and retailers of the era, including John Lewis, Associated American A-list, and David Whitehead, for whom she created a number of abstract designs.

My duties involved finding modern painters who would produce ideas for textiles.  If these were approved by the firm they were adapted and drawn up by the Design Studio, who were very interested and skilled.  We were all concerned with producing attractive designs which were acceptable to the artists(Tom Mellor quoted in David Whitehead Ltd, Artist Designed Textiles 1952–1969 by Allan Peat).

Magazines such as House Beautiful and Homes and Gardens helped shape public taste through advertisements for fashionable textiles and articles discussing how best to use them in the home.  Furnishing fabrics with colourful and urbane patterns, such as Groag's ‘Traffic Lights’ (c. 1952), played key roles in stylish interiors.  Groag's ability to create skilful and aesthetically outstanding designs for multiple media distinguishes her as one of the key designers in mid-century Britain.  She also produced laminated surface designs for home and business use, working with companies such as BOAC (British Overseas Airways Corporation) and numerous decorative laminate manufacturers, including Warerite, a subsidiary of the American company, Bakelite. The use of plastics for the home was a revolutionary development in modern living – Groag’s Lap Table with stylized black and white laminate ‘Lilliput’ design is a fine example.

Unlike Day, Groag preserved many of her preliminary drawings and collages, allowing insight into her meticulous design process, and these finely rendered works on paper can be appreciated independently as fine art.

Marian Mahler (1911–83) was also 'discovered' and nurtured by David Whitehead Ltd.  A native of Austria, Mahler studied at the Kunstgewerbeschule (Arts and Crafts School) in Vienna from 1929–32, then at the Royal State Academy, before emigrating to Britain in 1937. There she worked with a number of textile manufacturers until the early 1950s when her artistic skills as both an illustrator and textile designer caught the attention of John Murray, Director of Furnishing Fabrics at David Whitehead, who had been given the mandate to reinvigorate the company by producing affordable textiles with good design.

Murray recognized in Mahler a unique vision that he believed would appeal to the younger generation of the time. He was proved right, as her delicate, beautiful whimsical figures and modern abstract forms became remarkably popular with a younger, sophisticated clientele looking to create a stylish, elegant, home on a budget.  Mahler's furnishing fabrics were produced in rayon or cotton and the roller printing process made them quick to produce and affordable.   Her ‘Linea Flowers’ (1953) with its brightly coloured, dynamic, playful but sophisticated pattern, signalled the end of wartime privation and helped overturn the conservatism that had characterized much of British design in the first half of the century.

The mid-century pursuit of fresh and provocative designs is reflected in the work of other women designers who produced popular textiles of the period.  The work of Paule Vezelay, Mary White and Mary Warren is also included in the exhibition. Together they present a uniquely British brand of modernism whose broad appeal is still relevant to contemporary domestic interiors today.