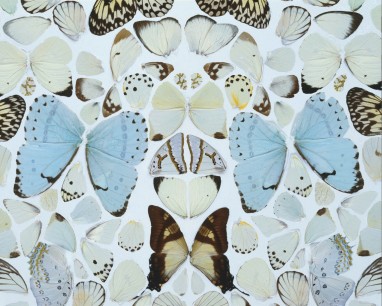 Probably everyone has heard of Damien Hirst. The artist has permeated contemporary visual culture with his vanitas, representations of colourful dots, animals immersed in formaldehyde, objects encrusted with diamonds and images of decay and passing. In his works he portrays binary oppositions: life and death, beauty and ugliness, positivity and negativity. The same can be said about the reception of his art, which causes both awe and outrage. People either love it or hate it; or both. He is called a genius of contemporary art, an entrepreneur, a successful businessman, a celebrity or a con artist, who makes fools of his audience, thrilling it with catchy imagery and luring with pristine representations of religious themes.

Most of Hirst’s ‘lovers’ and ‘haters’ have experienced his works through photographic reproductions and headline news. Now, the public can see at first hand what the art world has been talking about for the past two decades and decide for themselves what Damien Hirst, as an artist and now probably also a ‘brand’, represents. The current blockbuster retrospective in Tate Modern entitled simply ‘Damien Hirst’ presents a substantial body of the artist’s works created since his studies at Goldsmiths College.

The show features a vast repertoire of objects: pills, cigarettes and sausages. All the distinct series and what Hirst is most famous for: killing flies, the shark, multiplied spot paintings and dissected animals in tanks. Visitors can also stand face to face (for free) with the human skull encrusted with 8601 diamonds, which is displayed in a separate darkened room in the vast Turbine Hall and guarded by its own security.

The catalogue that accompanies the exhibition is packed with interesting and little-known stories from the artist’s life. It includes essays by Ann Gallagher, the Head of Collections (British Art) at Tate; Michael Bracewell, a cultural critic; artist Michael Craig-Martin, one of Hirst’s tutors at Goldsmiths; art historian Thomas Crow, who investigates key aspects and the context of the artworks; critic Brian Dillon, giving an overview of major themes explored by Hirst; and by Andrew Wilson, a Curator of Modern and Contemporary British Art at Tate. It also includes an interview by Nicholas Serota.

The catalogue, which is very well illustrated, takes the reader on a journey full of facts and fascinating perspectives on scientific imagery, subject matter and vocabulary characteristic of the Western aesthetics and history of art embodied in Hirst’s works. It explores the world of medical cabinets and the pharmaceutical collages of the distressed body, which in itself becomes a ‘cabinet of curiosity’ for the artist. Most often, it is presented as fragile, in Pop and gothic-like containers or frames; works that cause disgust and repulsion but are also described as ‘sublime’ by some.

Hirst’s masochistic works have a dual nature of being subtle and perverse at the same time. They are antagonistic and sexy, which sells well and, in general, is visually appreciated and apprehended. Hirst’s interlocking narratives can be read in at least a twofold way. Cabinets containing bodies or their fragments, glass and surgical instruments, scientific and religious imagery with alchemical associations can suggest horror and Frankenstein-like production or a critique on consumption and the political economy of the art market.

The exhibition presents a glamorized horror of polarities under the umbrella phrase ‘memento mori’. It is a macabre take on capitalism and mass production, a carnival or fun fair where you can go, see some cabinets of curiosities, and animals brought to ‘life’. Then, in the shop at the end of your journey through this anatomy lesson, you can buy a token of your personal Hirst to take home. It’s a consumerist vicious circle, where viewers are also potential customers. The exhibition features art and its value through an iconography of the new faith in wealth and luxury.

Hirst is a sort of Dr Frankenstein, who discovers a secret for animating lifeless matter and by assembling different parts he creates what, as he claims, represents the physicality and materiality of death. Through unorthodox art and scientific-like activities he produces tableau vivants. These are attractive works, juxtaposing commodity fetishism, Pop, Minimalist and Conceptual strains but are they really part of a critical discourse? Aren’t they just playful?

Art, religion, science, market and money – these are subjects of Hirst’s works and at the same time these are the works themselves. Hirst produces spectacular objects that provide an immediate effect. The audience consumes pristine marketable commodities with such familiar imagery as to be nearly surreal. The artist is grappling with reality that surrounds him.

Through the staging of medicine cabinets, he reveals a contemporary pathology of consumption, stupefaction and anaesthetization of the senses. Have people become so accustomed to horrific images of dead bodies that they are now completely immune to them? The works incite emotional responses more than ideas. The clinical directness and a lack of feeling suggest a loss of boundaries between life and death but also between ethical issues. The imagery is so provoking no one pays attention to details: for example, the construction of boxes and vitrines, in which Hirst has encased dead bodies, or the specific medicines purposefully displayed in the cabinets.

This exhibition allows us to see Hirst’s works beyond their well-known photographic images from numerous catalogues or the Internet. Beyond walking in between dead cows and decaying butterflies, or what’s left of them, it is worthwhile looking at and through the imagery, exploring whether it is real (diamonds used for the skull) or fake (diamonds on the shelves). Hirst shows things that seem to be easy to understand when they are not. He provokes the audience to be more than just passive spectators. At the same time, one is not allowed to intervene or participate. One can queue first to buy the ticket, then to enter the exhibition and then to come into the rooms and to admire but not to touch or get involved. It is consumption for its own sake; no need, just want.

Both the exhibition and the catalogue give a fascinating insight into Hirst’s cabinets of curiosities with objects for the consumption of the curious gaze of the spectator. They are a theatrically staged authenticity. It seems so is the blockbuster retrospective. Hirst first created containers as picture frames, then room-sized installations changing the scale of his works and now he has extended his containers to the whole Tate Modern, where the viewers are inside this boxed display of production and consumption. He says putting a box around something is like stealing a space for his sculptures. He has now created a museum display or perhaps even a cabinet of curiosities, where everything is staged, artificial, cool, unreal or hyperreal and emotionless. It is also shocking in a way that the exhibition seems to be yet another artwork, this time inviting an unconscious audience to reflect upon institutional critique.

The exhibition ‘Damien Hirst’ is at Tate Modern until 9 September 2012.

Have you seen the catalogue? What did you think? Is it enjoyable to read? Good value for money? Let us know!