War stories: What (else) Hitler did in the war 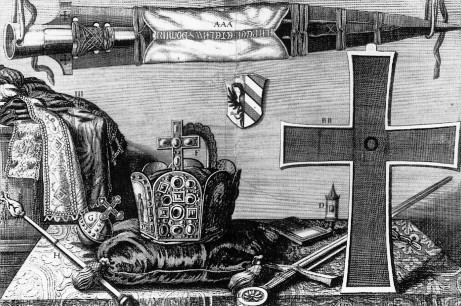 Hitler's Holy Relics. A True Story of Nazi Plunder and the Race to Recover the Crown Jewels of the Holy Roman Empire

Books about art are not supposed to be page-turners.  But this work, written in breathless, best-seller prose, truly defies putting down.  Its subject is indeed art history, namely the mediaeval regalia of the Holy Roman Empire, today a treasure of the Hofburg, in the Habsburg imperial treasury in Vienna.  Its story is true, based on careful archival research and much declassified material.  Its hero was real: Professor (and Captain) Walter Horn, raised in Heidelberg but returned as a part of the victorious American army to Nuremberg as one of the ‘monuments men’. This remarkable cadre of scholars was responsible for finding and restoring to their rightful owners the vast storehouses of art and artefacts plundered by the Nazis.

And (full disclosure) this book has something even more special to me: Walter Horn was someone I myself knew as a young art historian, when I began my career in his place upon his retirement from Berkeley in 1974 (not 1979, as stated several times in the book).  I met his wife Alberta and heard the abridged version of these war stories in his own words.  My friends went mushroom-picking with him  in Marin County.  I celebrated his opus magnum as it appeared in three volumes in 1979.  Moreover, my own father served in a similar secretive capacity for the OSS (forerunner of the CIA), albeit in the Asia theatre, so I am of an age that has mourned the passing of Walter Horn and other parents of his generation.

Kirkpatrick's suspense-filled treasure hunt was pursued by Walter Horn under the pressure of a three-week window before the conquered territories would be zoned among the Allies and thus restricted in access to an American once the Russians (and British and French) occupied their regions of Germany and Austria after the post-war peace was established.  Moreover, the main site of his inquiry, Nuremberg, was overrun by soldiers and journalists in preparation for equally unprecedented war trials of Nazi war criminals.

As Kirkpatrick also makes clear, the immediate control and the initial recovery of Nuremberg were left in the very hands of the wartime Nazi leaders, close associates of the late mayor, whose death by gun-shot in the last days of the war might have been a murder but was recorded a suicide.  Horn, a native speaker of German, had to gain the confidence of those locals but also, eventually, to break down their stories and find where they had hidden the regalia.

The crown jewels, sceptre, sword, and relic of the Holy Lance were removed to Vienna for safekeeping from Napoleon in 1806 from their long-time home in Nuremberg.  There they had been shown annually as sacred relics of the Holy Roman Empire and kept in Nuremberg since the time of Emperor Sigismund (1424).  Thus when Hitler returned these treasures to Nuremberg, along with his concerted redevelopment of the city as his favourite staging-ground for party rallies and propaganda events, he opened up the possibility of a new cultural centre for his proposed Reich.  If Berlin was the capital and head of the restored Third Reich, then Nuremberg was to be its heart, with local parish church St Lorenz elevated to a national cathedral.  Kirkpatrick's book makes a good case for a pervasive ideology of Hitler's propaganda use of the regalia of the Holy Roman Empire, perhaps even for his eventual plan to crown himself Emperor.

But the startling proposal of this book emerges through the figure of Heinrich Himmler, head of the dreaded SS forces and a passionately committed student of German mythic history, an Aryan heritage that he promoted especially within his own castle setting, Wevelsburg.   When Horn visited that remote site, associated with primitive German nature worship, he discovered in its tower basement a ceremonial circle with an elaborated swastika design, enhanced with archaic runes, signs also visible on Himmler's personal china set.  Piece by piece, especially after a briefing from his German curator friend and colleague Günter Troche in Nuremberg, Horn began to reconstruct an elaborate Nazi Aryan mythology, for the SS in particular, which revived the mediaeval tradition of crusading Teutonic knight as a secret warrior.

The regalia and the Holy Lance seem to have figured in this scheme, not least in architectural design. Here both Himmler's redesign for his castle and Albert Speer's larger designs for the Nuremberg parade grounds for Hitler and the Nazi party also culminated in spear-like convergences, oriented towards special sites (in the Himmler castle, Hitler's tower; in Nuremberg, the imperial chapel in the mediaeval castle).

With a ticking clock, marked by the time lapse on the calendar at each chapter and with a series of crucial interviews of former Nazis, Horn draws ever closer to the treasures. Kirkpatrick portrays each character vividly, recreating conversations and situations with a novelist's vividness.  Eventually, after a wild goose chase to an Alpine lake, where rumour held that the regalia had been sunk to keep them out of the hands of the Allies, Horn forces the hand of one of the local Nuremberg officials, who hid the objects underneath a children's school.  Even the denouement is thrilling, when Horn and his driver illegally cross into the Soviet zone and bribe the border guards with nylons and whiskey in order to get his mother out safely to the American zone at Heidelberg.

As an art historian (unlike the author of this book) I am quite conscious of the post-war careers, mostly in American museums, of the selfless individuals who did so much to restore art to its original owners. (Of course, for private, mostly Jewish collectors, decimated by both exile and death camps, the documentation is more fugitive and the survivors more distanced from their family holdings, so restitution has been slow and often contentious, though increasingly favourable in recent years).  On the other side of the same coin, as a scholar of German art history, I also am often dismayed to discover the unsavoury political pasts and degree of wartime participation in Nazi art projects by many leading German art historians, particularly those with a nationalist agenda in their research.

The book, while carefully researched, does have a few annoying features.  I have already noted that the date of Horn's retirement is surely off by half a decade. More serious is careless attention to artwork: the precious altarpiece from St Mary's, Cracow was by the Nuremberg-based carver Veit Stoss, whose name is misspelled throughout as ‘Viet’.  It too was located in the bunker where the imperial regalia were secreted in Nuremberg and was one of the major items to be restored to its original owners, despite the tensions between Communist Poland and the Americans.  Of course, the imperial regalia continued to be a bone of contention between Nuremberg's tradition and Vienna's title, but finally by treaty agreement the Austrians recovered their Habsburg patrimony.

Unfortunately, despite his claim to wrap up the outcomes in an Epilogue, Kirkpatrick misses a real storytelling opportunity, one that I remember hearing about from Horn himself.  A few lines in the final chapter suggest that the future professor delayed his return to America in order to pursue the unmatched coin collection amassed by Hitler but also supposedly hidden beneath the surface of a lake.

As Kirkpatrick notes, Horn later supplied notes about this quest to another best-selling art writer, Peter Watson, for a lightly fictionalized book, The Nazi's Wife, which recounts that story of how Horn – still all charm even in his sixties, and with a roving eye, despite a good marriage to Alberta – in his youth was able to obtain this crucial information.  His source was the wife of the high-ranking Nazi official, then in hiding but responsible for the care of the coins. Despite this official’s secrecy, Horn succeeded in his recovery effort.  How he did so was told to me mostly with a wink while shrouded in vagueness, but Kirkpatrick sets up the tale when he notes how the newly promoted captain went off to his mission in a commandeered BMW convertible and in high spirits.  So far I have not succeeded in finding the Watson book, but that is another war story I also crave to read.

Perhaps more than a half-century, indeed two full generations, have to pass before one can get access to enough classified information and have enough historical distance to tell stories such as Hitler's Holy Relics.  Since the mid-1990s a range of books and documentary films, some more popular than others, have begun to tell the story of the monuments men or the Nazi’s plunder of art from their captured territories.

Most scholarly of them all is Lynn Nicholas, The Rape of Europa (1995), which carefully researched the main Nazi figures and their procedures in occupied countries; that book also formed the basis of a careful, two-hour film documentary about the restitution undertaken after the war's end, and it still had access to some interviews with survivors of the project.  Another good starting place for the interested reader today, still scholarly if more polemical in tone, are a pair of books by Peter Petropoulos, Art as Politics in the Third Reich (1996) and its extension, The Faustian Bargain: The Art World in Nazi Germany (2000).

Closer in tone to Kirkpatrick, that is, more readable and wearing its research lightly, is Monuments Men by Robert Edsell, founder of the Monuments Men Foundation for the Preservation of Art.  The subtitle of that book (co-written with a professional writer, Bret Witter) reveals its agenda and its tone: ‘Allied Heroes, Nazi Thieves, and the Greatest Treasure Hunt in History’.  In many respects it complements Kirkpatrick in focusing on the main hunts and tracing of art from Paris to the hiding-places in Germany, notably the notorious Altaussee salt mine, across the Austrian border.

Walter Horn does not even have a cameo role in Edsell's book, which focuses in Paris on James Rorimer, mediaeval curator and eventual director of the Metropolitan Museum in New York, as well as his French assistant/accomplice, Rose Valland and her boss, director of the French National Museums, Jacques Jaujard.  Other individuals do get their parts on the stage: conservator George Stout, Walker Hancock, Lincoln Kerstein, Robert Posey, and Briton Edmund Balfour.

Some other monuments persons became noted scholars in museums and universities (one notes the brief citation of eventual tapestry curator Edith Standen in both books), but they receive mere mentions and still need their stories told: Charles Parkhurst (another individual I got to know), Ernest Dewald, Craig Hugh Smyth, and others, including those who toiled in Italy, such as Deane Keller, buried with honours in Pisa (and prominent in the Rape of Europa film).

We are now ready for the fuller tales of Hitler's ideology and of the Allies' post-war efforts to reverse his aggressive accumulation of art from captured nations.  Some of the Monuments Men left memoirs, but their fuller story and the stories by those who did not recount their own experiences deserve both scholarly and popular retelling.  Walter Horn was a true German-American hero, and the mediaeval Holy Roman Empire crown jewels remain a visible, public treasure thanks to him.  Learning more about what he did and how he did it brings me full circle across my own career, like the framing photographs that portray Walter Horn, handsome and dashing at age 37, and end with the image of the lion in winter, 50 years later, that concludes the portfolio.  I owe a small personal debt of gratitude to Sidney Kirkpatrick for bringing this story of Walter Horn to a wider public.