The Bauhaus – the face of the 20th century 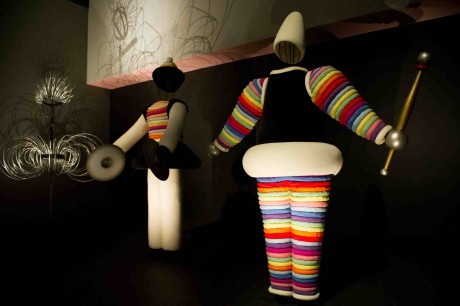 The Bauhaus is arguably the most famous and influential school of architecture and design. Underpinned by utopian and socialist ideals, it sought to unify art, craft and technology to produce advanced products for the industrial world and the betterment of humankind. Among its teachers were some of the most important figures in the history of modernism: the Russian painter Wassily Kandinsky, German architect Ludwig Mies van der Rohe and the Hungarian photographer and typographer László Moholy-Nagy to name but a few. Originating in Germany and with a life-span of only 14 years, its radical designs shaped the modern world. Once dubbed ‘the face of the 20th century’, its influence still endures today; virtually every corporate foyer or airport lounge is graced by Bauhaus-type furniture, and its innovative pedagogic ideas, even now, inform art college education.

The superb ‘Bauhaus: Art as Life’ exhibition at the Barbican Art Gallery in London’s Barbican Centre (until 12 August 2012) charts the troubled history of the school from its founding in the historic city of Weimar by architect Walter Gropius in 1919, through its move in 1925 to industrial Dessau, to its final home in Berlin during 1932–3, where it folded owing to pressure from the Nazis. It is a highly significant show, being the largest and most comprehensive in the UK for over 40 years and is a ‘must’ for anyone interested in modern art and design, from laypersons to design professionals.

The Bauhaus tends to be best known for its austere modernist architecture and product design by male designers, such as its functionalist Dessau school building by Gropius and Marcel Breuer’s iconic tubular steel B3 Club chair from 1925. ‘Bauhaus: Art as Life’ presents a much rounder and richer view, presenting chronologically and thematically over 400 items showing the sheer scope, experimental nature and versatility of the school. The show encompasses sculpture, painting, experimental film, ceramics, stage design, architecture, graphic and interior design, stained glass, photography, children’s toys. There are even rare examples of Bauhaus fashion for the modern, emancipated women that would not be out of place on a catwalk today. Indeed, it rightly celebrates the work of female designers, such as the stunning textile designs by Anni Albers, who combined traditional fibres with new synthetic materials.

Spread over two floors ‘Bauhaus: Art as Life’ starts on the Barbican’s upper galleries with the school’s roots in artisan crafts and the quirky, avant-garde art movement German Expressionism, then moves on to its adoption in the mid-1920s of a new rationalist design aesthetic of basic geometric forms more suited to mass production – the school had to largely pay its own way. The lower floor features photography, architecture and the school’s successful commercial design. It also highlights the school’s vibrant community and relations between staff and cosmopolitan cohort, and is one of the show’s many strengths.

Gropius sought to encourage ‘friendly relations between masters and students outside of work’. The exhibition shows the playful side of the Bauhaus; parties, festivals and stage productions acting as both outlets and catalysts for creativity, and giving the school a special atmosphere. Gunta Stölzl, a student who went on to become the school’s only female teaching master, wrote in her diary in 1919: ‘Just two days, and how rich they’ve been already. The first evening was a wonderful party: One immediately sensed what sort of spirit flourishes here...’.

The design of the exhibition is excellent and appealing too. Installations of large-scale panels and boldly painted walls imaginatively re-articulate the gallery spaces and provide platforms for interpretative text, graphics and film projections, and appropriately draw on Bauhaus design principles, yet look fresh and distinctive. It all makes for a dynamic and visual stimulating experience that opens up the Barbican’s rather bunker-like galleries.

The exhibition’s catalogueBauhaus: Art as Life is a well-illustrated and handsome publication, with its Bauhaus inspired minimalist look and typography. It features 15 short original texts of published writings and personal correspondence by key figures such as Gropius and the eccentric Austrian painter and educator Johannes Itten as well as unknown authors. These give a fascinating insight into the ideas behind the design school, its practices and how it was viewed at the time.

There are also newly commissioned essays by leading academics, critics and curators. Although these texts are accessible and generally only three or four pages in length, they would, on the whole, really be of interest only to other scholars or Bauhaus devotees. The topics discussed are diverse, fitting in with eclectic approach of the exhibition and include Dr Anja Baumhoff on Bauhaus female students and staff. Despite the liberal atmosphere, only a third of the students were female and gender stereotyping meant that the weaving school became the women’s class.

Barbican curator Catherine Ince looks at the development and propagation of the Bauhaus brand through its novel graphic design, advertising and publications. While in an engaging essay ‘In the Bauhaus Kitchen’, the American scholar Nicholas Fox Weber writes on food and cooking at the school, which encompassed ascetic vegetarian regimes to purify the body and soul, rationally designed kitchens for the modern home and the parallels seen between cooking and painting; both have the ‘need for contrasts, balances and counterbalances’, observed Bauhausler and foodie Paul Klee. This was typical of the school’s concern with the minutiae of everyday living and seeing creativity as integral to life.

The show has been produced in conjunction with leading Bauhaus museums and archives in Berlin, Dessau and Weimar. Over the last decade interest in the Bauhaus has grown and benefited from the increased cooperation between these institutions thanks to German reunification; Dessau and Weimar were in the former East Germany (see their joint website).