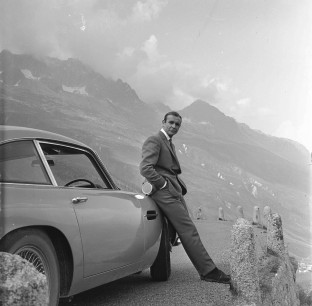 Peter Jones finds out how 007 looks after 50 years on celluloid, at a show at London’s Barbican Centre

Bond is back! Although British secret agent James Bond made his screen debut 50 years ago, he still looks good. The Bond films are the most successful and longest-running movie series to date. They were based on the spy novels of Ian Fleming, who drew on his experiences as an intelligence officer during the Second World War to create the character of 007. His Bond first appeared in the 1953 book Casino Royale.  But it is was the filmmakers that created the suave yet tough ‘Bond look’; the bespoke suits and Aston Martin sports car, and the highly lucrative blend of glamour, sex and realism.

Bond’s 50th anniversary and ‘look’ are celebrated in ‘Designing 007 – Fifty years of Bond Style’ at the Barbican Centre in London. It is an appropriate place for this exhibition as its labyrinthine, chrome and concrete interior feels like a Bond villain’s lair. ‘Designing 007’ spans Bond’s first outing in 1962 with Sean Connery in Dr No, to his latest incarnation in Skyfall, the 23rd Bond film. The show draws on over 400 artefacts from the Bond production archive; costume and set design, stills, props, title sequences, clothes by Versace and Tom Ford, and scale models such as the submersible Lotus Esprit from The Spy Who Loved Me.

There are, of course, gadgets galore such the ‘Little Nellie’, 007’s autogyro, along with the exploding briefcase and the vicious flick-knife shoes wielded in From Russia with Love. Although increasingly Bond’s accoutrements are tied to product placement and new technology – his American Express card, BMW motorcycle and state-of-the art Ericsson mobile phone, for instance. Also on display are film clips and interviews with special effects and stunt people, as well as the paraphernalia of film making: storyboards, continuity books and call sheets (the arrangements for a particular day’s shooting).

The exhibition is curated by fashion historian Bronwyn Cosgrave and Oscar-winning costume designer Lindy Hemming, who has worked on Bond films. ‘Designing 007’ is arranged thematically and though mostly centred on the Barbican’s Curve gallery, it is spread across three different areas on two levels and does feel disjointed. The show’s themed sections are designed to immerse the visitor in the Bondian world and include ‘Gold’, which focuses on the third film Goldfinger, ‘M’s Office’ featuring Bond’s often exasperated boss, ‘Casino’, 007’s habitual playground and ‘Foreign Territories’ which charts the exotic locations used in Bond films, including outer space.

The separate section ‘Villains and Enigma’ features the designs, costumes and props of Bond’s adversaries such as the creepy Blofeld and Jaws with his menacing steel teeth. There are femme fatales such as the Russian Xenia Onatopp, whose black patent leather costume complete with belts and straps makes her look like a cross between a dominatrix and Ninja warrior. The final section, ‘Ice Palace’ dealing with Bond’s exploits on the ski slopes, feels the weakest and is located in the Pit Theatre, several levels down from the main displays. Even 007 might have trouble navigating the Barbican’s rather peculiar lift system.

What really comes across in this exhibition is imagination and sheer ingenuity of the production teams and designers, as with the gold covered body of Bond heroine Jill Masterson, a sinking Venetian palazzo for Casino Royale in 2006 and Ken Adam’s well-known, yet ever stunning futuristic set designs for such films as You Only Live Twice. The exhibition credits less well-known figures too, such as Beatrice Dawson, who was responsible for the costumes of various early ‘Bond girls’, and production designer Peter Lamont. He created a mock-up of St Petersburg in Hertfordshire for the extraordinary GoldenEye chase sequence in which Bond wreaked havoc with a 36-ton Russian tank!

The exhibition’s rather expensive glossy paperback catalogue Designing Bond: Fifty Years of Bond Style contains three short yet informative essays. Bronwyn Cosgrave writes on the fashion influences and choices for Bond films, Lindy Hemming discusses being a costume designer and its demands, and there is an outline of Ian Fleming by his biographer Andrew Lycett. There is also a short interview with Ken Adam on set design. A filmography and further reading would have been welcome. This is very much a coffee table book; well produced, lavishly illustrated and following the exhibition’s themes. There is also a fun pop-up Martini bar and Bond shop at the Barbican featuring various merchandising; posters, pens, models of 007’s cars, replicas of Jaws’ deadly dentures, and some that is distinctly at odds with Bond’s urbane image, such as chocolates in the shape of gold bars and an 007 Monopoly board game.

‘Designing 007’ is a snazzy exhibition for the fans. With all the male visitors and gadgets, at times it seems a little geeky and does peter out in the latter sections. Yet it is an enjoyable experience and really does show just how special the Bond films are. It also should be on the list of those interested in film production, costume design and fashion. ‘Designing 007 – Fifty years of Bond Style’ runs until the 5 September 2012 at London’s Barbican Centre.