From Abakanowicz to Zadkine: Not your average sculpture garden 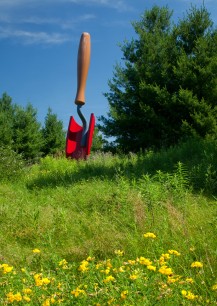 Jonathan Rinck admits to being impressed by an unexpected gem

In a five-storey greenhouse that demands comparison (if with a bit of imagination) with Paxton’s Great Palace of 1851, I explored a Victorian garden, admiring not only the flowers and traditional wrought-iron furnishings, but also sculptures by Rodin and Degas,which were beautifully set against ferns, aroids and orchids.  Outside, surrounded by wildflowers and ornamental grass were sculptures by Henry Moore, Barbara Hepworth, Antony Gormley, Lynn Chadwick, David Nash, and Andy Goldsworthy.  The weather was 22C and sunny.  In fact, forecasts predicted clear skies for the entire week.  This was not England. Admittedly, the day was unseasonably nice for Grand Rapids, Michigan in mid June.

Having visited many of the great art museums in Europe and the United States, I’ve become hard to impress, which is why I patiently listened with incredulity to several students of mine who insisted that I should visit Meijer Gardens and Sculpture Park.  In the Midwest we have the Art Institute of Chicago and Frank Lloyd Wright – who has ever heard of Meijer Gardens?  But upon arrival I was immediately won over.

This 52-hectare garden and sculpture park was a philanthropic project of the late Frederik Meijer, billionaire owner of a regional chain of one-stop shopping megastores. The land was originally slated for commercial development, but Frederik Meijer chose instead to convert the space into a horticultural centre and sculpture park.  His 33 sculptures by Detroit artist Marshal Frederick formed the nucleus of the early park, but it now boasts of an impressive permanent collection of over 200 works by more than 60 international artists.

Conservator and assistant curator Caleb Brennan graciously guided me though its suite of indoor exhibition galleries in which a steady rotation of temporary sculpture exhibits are shown (there are three each year; previous exhibitions have featured works ranging from Picasso and Rodin to contemporary artists such as Deborah Butterfield and Magdalena Abakanowicz).

Currently, there is a concise retrospective of American artist Beverly Pepper.   About 20 of her polished and cor-ten steel works are chronologically arranged in eight sections.  An illustrated exhibition catalogue provides background for the works on loan as well as for her imposing cor-ten work in the park’s permanent collection, the 35-foot-tall Galileo’s Wedge. Although not prohibitively academic, gallery talks and demonstrations seem principally directed to the enthusiast.  Indeed, when I was there, the overwhelming majority of visitors were outdoors.

Outside, the sculpture garden assumes a conscientiously whimsical spirit.  A delightfully ridiculous sculpture by Tom Otterness, Mad Mom, with a permanent frown affixed to her cartoon face, inexplicably presides in perpetual disapproval over the Children’s Garden.  Sean Henry’s Lying Man rests nearby, as if watching the clouds; it would seem arrestingly realistic were it not for its monumental scale.  Elsewhere, the 23-foot-tall, bright red Plantoir by Claes Oldenburg, champion of the banal, stands erect, seemingly wedged deep into the earth.

This park is disarmingly unpretentious, yet its collection is world-class.  Among the artists on permanent display include Aristide Maillol, Auguste Rodin, Edgar Degas, Henry Moore, Barbara Hepworth, Antony Gormley, Alexander Calder, and Jean Arp.  The collection is still growing and will soon add a work by Anish Kapoor.  Indoor works in the permanent collection include sculptures by George Segal, Roy Lichtenstein, and Dale Chihuly.

Some works in the park may only be seen from a distance. The footpath often leads right up to others, however, inviting the viewer to pass even right under and through some of the larger sculptures (such as Alexander Liberman’s Area), literally dissolving any boundaries between artist and viewer.  One of the largest sculptures in the collection, Liberman’s 43-foot tall Aria is a massive non-representational but undeniably photogenic jumble of flat, red steel. In the spirit of Alexander Calder, Liberman seems to be playfully painting in space.

Viewers may also get close to Nina Akamu’s 24-foot tall da Vinci Horse, a sculpture intended to replicate an equestrian statue by Leonardo da Vinci, commissioned by the Duke of Milan, Ludovico Sforza.  The original clay statue was destroyed by the French in 1499 before it could be cast into bronze.  This version, based on Leonardo’s drawings, was unveiled exactly 500 years later; a second identical version was given to Milan.  This imposing sculpture seems to be the most popular work in the collection.

Despite their eclectic variety, nearly all works on display integrate beautifully into their natural surroundings.  Even George Rickey’s rigidly geometric Four Open Squares, for example, hover just inches above a small pond, the light catching their highly reflective, polished surfaces much in the same way that it dances off the ripples in the surrounding water.

There is almost no explanatory information to accompany the works on display.  Some visitors may find this frustrating.  The park does, however, offer a free audio tour for download, replete with information and interpretation provided by the curators.  In many cases, the viewer can listen to the artists themselves explain their works.

Strictly speaking, this isn’t an art museum.  There is no narrative, and while it contains works that date back to the late 19th century (Rodin and Maillol), the bulk of the collection comprises works by contemporary or near-contemporary American and British artists.  The holdings are extensive enough, though, that it is easy to forget that the park was originally intended to be just an extensive horticultural garden.

The gardens are indeed worth mentioning.  There are nine different collections, several of which are open year-round in an impressive greenhouse.  Particularly exotic (and undeniably creepy) is the carnivorous garden, one of the nation’s largest.   On the premises, there is even a recreation of Monet’s lily pond.   A large Japanese garden is currently under development and is scheduled to open in 2015.

All pretentiousness and formality disappears here, and there is an emphatic playfulness throughout the park.  The sculptures are inviting and accessible, and even the most abstract works are always interesting and invite viewer interaction.  This sculpture park is a breath of fresh air.  Every sculpture garden is interesting.  This one, however, is also just plain fun.