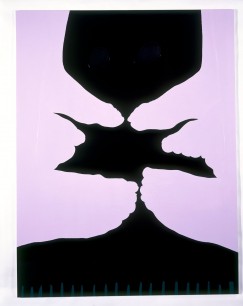 Bridget Riley, Anish Kapoor and currently Gary Hume; very different artists who have now all featured in Arts Council Flashback exhibitions.  ‘Flashback’ is a major series of touring exhibitions from the Arts Council collections that invites artists to revisit their early works and use them as a starting point to reflect on their subsequent work.  ‘Flashback’ also celebrates the Arts Council’s progressive and successful approach to identifying and collecting artists’ works early in their careers.  The Arts Council purchased Four Feet in the Garden 1995, one of the paintings on display in this exhibition ‘Gary Hume: Flashback,’ the year it was created.

Gary Hume went on to represent Great Britain in the Sao Paulo Biennale the following year and again at the Venice Biennale in 1999.  Solo exhibitions in 2003 and 2008 followed.  Other successes include being nominated for the Turner Prize in 1996 and winning the Jerwood Painting Prize in 1997.  It is therefore apt and fitting that the Jerwood Gallery, Hastings is hosting this show in its inaugural year.  In addition, Gary Hume was born nearby in Kent and has strong ties to the local area.

Hume exhibited in the celebrated and legendary ‘Freeze’ Exhibition held in a disused Port Authority warehouse in London’s Docklands in 1988. That was the show that launched a new generation of British art and artists referred to as Brit Art or the Young British Artists.  Other yBas include Tracey Emin and Damien Hurst.  Gary Hume’s early works were his door paintings: life-sized representations of hospital doors.  These are, quite literally, glossy versions of a set of doors reproduced from St Bartholomew’s Hospital in East London.  Hume now paints on huge aluminium panels still using household gloss paint.  He is often referred to as a colourist painter and his recent works feature the use of vibrant and intense colour that dominates the image.  This is typified in Four Feet in the Garden (1995), which features in the exhibition, or The Highlight (2002)in which a lilac highlight vividly stands out from a representation of a head of hair in deep purple.  In American Tan VI (2006–7), a gloss-painted bronze sculpture also on display at the Jerwood Gallery, Hume explores the motif of the American Cheerleader and how we are all being ‘tanned by American policy and culture’.

A highlight of the exhibition is the enormous My Aunt and I Agree (1995) that dominates a whole wall of the gallery.  There are nine works of art on show and there is plenty of space around and between the pieces; this allows the paintings to be viewed in separation, as Gary Hume prefers.   The Jerwood Foundation’s Chairman, Alan Grieve, explains that he appreciates the vibrancy of Gary’s work after looking at them in isolation and for several minutes.

The early success of the yBas, who are now all well into their 40s, has been repeated by the young team at the Jerwood Gallery, who have achieved a significant accomplishment in hosting this Arts Council Flashback exhibition.  They have had to negotiate both the outward loans policies from the Arts Council and the complexities of the government indemnity insurance scheme.  The scheme provides insurance to works of art on loan from private lenders for any institution to which the public has access, but is explained in a lengthy 75-page document.  One aim is to encourage galleries to hold important exhibitions or add to existing collections without having to take out expensive commercial insurance.  More touring exhibitions at the Jerwood Gallery, Hastings must surely follow

The exhibition opened at the Jerwood Gallery, Hastings, on 14 July and runs until 23 September (it then transfers to the Aberdeen Art Gallery).  Admission is £7 for adults or £5 for concessions.