No grand designs – a Greek tragedy 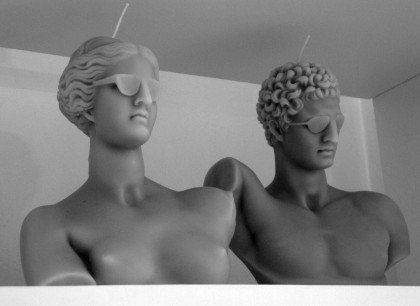 British design – Scandinavian design – Italian design…Greek design? Design is not something instantly associated with Greece. One might think of the Parthenon, but then, as Artemis Yagou shows, most Greeks would think of the Parthenon too. We know all too well the present situation with the Greek economy but Yagou’s book, most of which was written well before the current problems appeared, shows that the roots of present difficulties go well back in modern Greek history.

In the 1830s, when Greece won independence after four centuries of Turkish rule, the country had no industrial base at all, being an almost completely agrarian economy. There was no bank to fund industrialization until 1841. The Great Powers of Europe, bankrolling the government, preferred Greece to stay as an importer of industrial products. Small wonder, then, that at the 1851 Great Exhibition in London’s Crystal Palace, Greece exhibited honey, fruit, embroidery, marble bas-reliefs, and wood carvings. It was an achievement to be there at all – and some of the exhibits did win prizes for quality.

Yagou shows how, as the 19th century progressed, imported western European clothing started to replace traditional dress. There was criticism of ‘xenomania’ and ‘hypereuropeanization’ as literature and drama lampooned the new fashions. Countering this was an extreme attachment to ancient Greek history and a sense of national identity based on that, and this has been of fundamental importance right up to the present.

Between 1880 and 1922, foreign loans allowed the development of an industrial infrastructure. Businesses such as the Poulopoulos hat factory in Athens began to make the new styles locally and came to symbolize modernity. In 1914–23 harsh persecution of the Greek population of the Ottoman empire led to a vast exodus of Greek people to Greece itself. Half a million refugees boosted both the size of the domestic market and the labour force to produce goods. Products now made included ceramics, kitchen equipment and small domestic appliances, but firms tended to be small. Greece was becoming a consumer society. In Athens a ‘Permanent Exhibition of Greek Products’ showcased such goods (1933–8). Public interest in design and décor developed, illustrated catalogues appeared and sophisticated marketing techniques were used.

Nonetheless, Yagou shows that the Greek government continued to believe that agriculture was the mainstay of the economy and did not encourage industry. There were concerns that industrialization would destroy Greece’s unified society, creating a bourgeoisie and a proletariat. Foreign powers still provided large amounts of capital and wanted Greece to remain a consumer, not a producer. Meanwhile, the public favoured foreign goods as ‘superior’ to Greek-made ones.

Private attempts to bolster design education and hence industrial production met with little success. People wanted civil service office jobs and saw work in industry as lowly, so only the poorest young people tended to pursue design-based courses. Even within industry there was little appreciation of design or designers, with ‘design’ often confused with mere surface decoration. As Yagou says, ‘education reflects a society’s choices about how it wants to shape its future’. Greek education was ‘ideologically dominated by archaeolatry (the adoration and glorification of the ancient past)’. Those with artistic talent were expected to become fine artists, not designers.

Reconstruction after the Second World War (again financed by foreign powers) gave Greece another chance at industrialization, which did develop rapidly in some areas. In the 1960s manufactured exports exceeded agricultural ones for the first time. People began to demand much higher standards of living, well beyond what they (or the country) could afford. Greater recognition of the importance of design led to the founding of the Athens Design Centre and the Greek Society of Industrial Morphology, but these still faced an uphill battle.

There were a number of groups promoting design as a profession and as essential for industry, but they remained fragmented. Industrialization still had many opponents. Despite the success of a few individual firms and designers in the 1970s and ’80s, the overall position remained uninspiring. Craftwork and folk art were idealized and this counteracted modernizing efforts, with mass-produced goods being seen as vulgar. Jobs in the civil service were still valued much more highly than those in industry. Unsurprisingly ‘Greek design remains non-competitive and holds a negligible place in the international market’.

It was hoped that the 2004 Olympics, in Athens, would boost Greek design but such expectations met with disappointment.  It seems that every time Greek industry has had a chance to flourish, lack of institutional support has allowed it to fail. Greece is ‘a society where public sector bureaucracy has overshadowed any economic activity’.   ‘Looking at the wider picture, the design case presents an eloquent example of the problems that have made Greece an unsustainable economy in the long run’. The author plainly hopes that the current situation will inspire a new outlook and a new commitment to design and to industry. The outcome if it does not looks dire indeed.