Titian unmasked: ‘The most money-grubbing individual ever created by nature...’ 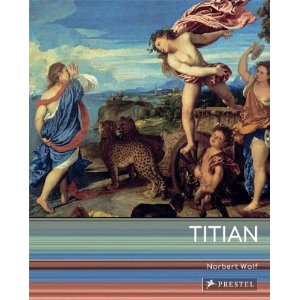 Move over Leonardo and Picasso, it could be that 2012 is going to be Titian’s year. There is a touring exhibition organized by the National Gallery, London, displaying Diana and Actaeon (1556–9), in Liverpool, Norwich and Cardiff. The NG’s recent exhibition ‘Diana and Callisto’ and the current ‘Titian’s First Masterpiece’lead toward the major summer show ‘Titian: Metamorphosis 2012’,in July. And that’s apart from exhibitions in Milan and New York. With much to see of Titian’s work, a new publication, Titian, an introduction to the painter by art historian Norbert Wolf, is a good companion.

In Titian – a beautifully illustrated book – Norbert Wolf focuses on the history of Titian’s life and his key paintings. He uses the artist’s own words and those of patrons and Renaissance writers to set works in context and to give insight into Titian’s life at the Venetian court and beyond. Wolf reveals Titian to have been an ambitious man, called by an envoy to the court of Urbino, ‘the most money-grubbing individual ever created by nature... [who] would let himself be flayed alive for the sake of money’.

That shock summary sharply focuses one’s perspective on the artist patronized by popes and kings. Wolf’s analysis engages the reader in Titian’s robust drive to secure the best commissions, plus mild grovelling for good jobs and income for his family, not always with success. It opens up debate on the challenges of an artist’s life in 16th-century Venice. The text is further supported with a timeline biography of the ‘Life and work of Titian’ linked to ‘Political and cultural’ life in Italy.

Reading through the chapters, the list of Titian’s illustrious patrons is astonishing. He was a revered artist, although perhaps not by Florentine rivals Giorgio Vasari and Michelangelo, who visited Titian when he was in Rome in 1545. Estimates of the number of paintings produced during the painter’s career range from over 400 to possibly as many as 600, if variations on an original painting are counted (such as replications of his nude portraits for princely and aristocratic patrons).

In Titian, portraits, altarpieces, frescoes and many nude paintings are ‘unwrapped’ to reveal their history, such as the near seven-metre high Assumption (1516–18) – the largest altarpiece created in Venice –  for the Frari Church, which caused a sensation. Lodovico Dolce, a ‘Renaissance man of letters’, identified it as marking the beginning of the Venetian nuova maniera, the new way of painting, replacing the previous ‘cold and lifeless figures’. And this was just at the beginning of Titian’s career.

In a chapter devoted to Titian’s nudes, an example is the stunning Danaë (c.1545–6) (now in Naples), commissioned by Cardinal Alessandro Farnese. Wolf refers to a letter written by Giovanni della Casa, papal nuncio in Venice, which updates the cardinal: ‘Titian has almost completed a naked female figure Your Eminence ordered that would put the devil into the Cardinal of San Silvestro’. Wolf explains that the cardinal mentioned is the Dominican Tommaso Badia, a leading censor of the papal court.

One imagines the Danaë arriving at the Farnese palace by the back door, or at least wrapped in a large brown envelope; particularly as Della Casa stated that Titian could give Danaë the face of Donna Olimpia, a high-class courtesan intimately known to Cardinal Alessandro. It was Titian’s intent to create for his patron an erotic nude more sensual than Giorgione’s (and Titian’s) Sleeping Venus (1508–10) (Gemäldegalerie Alte Meister, Dresden); or Titian’s Venus of Urbino (1538) (Galleria degli Uffizi, Florence), referred to by Della Casa as a ‘Theatine nun by comparison’. Wolf’s research certainly brings the paintings, the patrons and the painter to life.

Surprisingly, or perhaps not, the Hermitage Museum’s painting by Titian, The Flight into Egypt (c.1506–7), currently on loan to the National Gallery and billed as his first masterpiece, does not get a mention in Wolf’s history. Titian scholars must appraise his art on different scales. More familiar masterpieces, such as Bacchus and Ariadne (c.1520–3) (National Gallery, London) and Titian’s many remarkable portraits and religious works, are discussed and illustrated.

It is Titian’s Self-Portrait (c.1550–62) (Gemäldergalerie, Staatliche Museen zu Berlin) that Wolf uses to ‘show and tell’ Titian as he wanted to be portrayed, ‘devoted to the semiotics of success... all is prestige and reputation...’. In his self-portrait Titian wears a luxurious fur robe and four glittering chains of gold presented to him on his knighthood in 1533 by Emperor Charles V. Wolf states that the painter may even have up-scaled his age to be recorded older than he was in later years, nearer to 100 than 90, which is an unusual ploy to gain gravitas and one that gives further insight into the commercial mindset of this ‘prince of painters’, whom Wolf unmasks.

Named after Saint Titianus, Tiziano Vecellio (c. 1488–1576), known as Titian, was born in Pieve di Cadore, a town on the Venetian side of the Alps, about 130km north of Venice. At about nine or ten years of age he travelled to Venice, with his older brother Francesco, to be an apprentice in the workshop of the artist Sebastiano Zuccato, a respected mosaicist. After that he briefly worked for Gentile Bellini (c.1429–1507), before joining the studio of Gentile’s brother, Giovanni Bellini (c.1430–1516). It was at this time that Titian met Giorgione (1477/8–1510), an artist not much older than himself but the most formative influence on Titian’s early style of painting. After Giorgione’s death in 1510 and the death of Giovanni Bellini – ‘the grandseigneur of Venetian painting’ – in 1516, Titian became the most sought-after painter in Venice, and beyond.

Titian exhibitions 2012
Titian’s first large-scale painting The Flight into Egypt (c.1506–7), billed by the National Gallery, London, as his first masterpiece, is on loan from the State Hermitage Museum, St Petersburg. It is the first time the painting has left Russia since it was purchased in Venice in 1768 by Catherine the Great. It is on display in the Sunley Room (until 19 August 2012), alongside 20 key paintings by Titian’s Venetian contemporaries, including Giovanni Bellini. Read Susan Grange's review in this issue of Cassone.

During the summer a major Titian exhibition, ‘Metamorphosis: Titian 2012’ will be at the National Gallery, from 11 July–23 September 2012.

A rolling British tour has already exhibited Diana and Actaeon (1556–9), at the Walker Art Gallery, Liverpool, Norwich Castle Museum and Art Gallery, and the National Museum, Cardiff (see Cassone ‘Art News’, April 2012), before exhibition at the National Gallery, London. Meanwhile, Titian’s pendant (i.e. companion) painting Diana and Callisto (1556–9) has been displayed in London. The Art Fund, in association with the National Galleries of Scotland, has created an interactive image map of the painting.