Will the real Cindy Sherman please stand up? 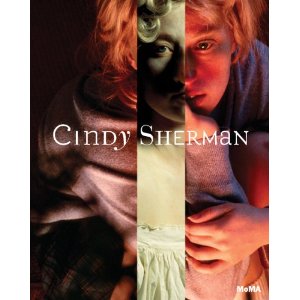 The varied and challenging work of Cindy Sherman is touring the USA. Basia Sliwinska reports.

A clown; a Hannibal Lecter-style sex doll with her legs wide open for visual consumption; Madonna with child with an artificial breast attached; Michelangelo Antonioni-like film-still representing a young woman in Rome; an older socialite in a djellaba standing in a portico; an hysterical female in a black suit clenching her fists. These are just some of the characters portrayed in the works of Cindy Sherman and presented in the spring at the exhibition ‘Cindy Sherman’, touring the USA this year and next.

Cindy Sherman is one of the pioneering artists of 20th and 21st centuries. She is also her own model: an actor, a photographer, a stylist and a costumer. Her photographs and collages portray different constructions of contemporary identity. Sherman’s work is about the idea of representation itself in a culture dominated by multimedia images – images that often come with particular associations.

The works show a cycle of female characters that refer to ideals of beauty and femininity promoted by the media. They form an inventory of ‘types’ manufactured from a series of artificial-looking women, whose identity is conveyed by their poses, gestures, props and particular locations. The artist steers the viewer in certain narrative directions, playing with images from art history but also from glossy magazines, TV ads, reality shows, YouTube videos and miraculous makeovers of women in their 50s into 30-something females unable to use their face muscles to express any emotions.

Sherman depicts a variety of characters and a variety of scenarios. These unexpected and often shocking personas are, as Sherman says, ‘more fun than just looking like Barbie’. An everyday girl becomes a vamp, a sex worker, a housewife, a fashion victim or yet another stereotype, which is explored and played, as though during a casting, when a range of emotions and characters are being probed.

Each body of work executed by Sherman focuses on a single theme. Different characters inhabit these staged, grotesque and horrific fairy tales full of cultural myths and excerpts of stories. It is a carnival of representations of society that suggest power relations.

The catalogue accompanying the exhibition is lavishly illustrated, featuring some of the most well known of Sherman’s works and some that have never been shown before. It contains two essays. The curator of the exhibition, Eva Respini, gives a fascinating overview of the themes explored by the artist while Johanna Burton, an art historian, critically analyses the body of Sherman’s work. Finally, the catalogue also includes an interview between John Waters, a filmmaker and Sherman, giving the reader an insight into the process of creating the photographs.

Sherman’s art is described as feminist, postmodern, with affiliations to the theories of psychoanalysis and of poststructuralism. It is capable of many interpretations although it is often tied to other feminist artistic practices involving the camera, performance, the body and the investigation into the surface of appearances. Sherman’s work is ofter discussed, for example, in relation to the works of Hannah Wilke, Suzy Lake, Eleanor Artin, Laurie Simmons, Sherrie Levine and Lynda Benglis.

Sherman’s works also have an affinity with those of other artists who have disguised themselves for the camera, such as Man Ray, Gertrud Arndt, or Marcel Duchamp, who used photography to create his alter ego, Rrose Sélavy.

Sherman has been one of those responsible for getting photography accepted as an art. It is a medium that uses masks to create fiction and often seduces with staged ‘authenticity’. The artist breaks down and at the same time reinforces certain stereotypes. Looking at her works, one can see what is pictured but also what is evoked. The ambivalence and conflicted emotions are enacted through images of the female body, of which so many images already abound in visual culture.

In the interview featured in the exhibition catalogue, John Waters calls Sherman ‘a female female impersonator’. She gives her audience an artificially constructed identity, playing with cultural expectations about sex, class, race, age or beauty. The ways in which the body is represented dictate how we interpret what we see. Her photographs give us a false sense of familiarity as all the images are based on pre-existing conventions. For instance, the film-stills look like real film-stills; one almost thinks one can identify the film, but of course there is no film. Sherman speculates about how identity is produced in a particular culture and context.

The exhibition offers an invaluable opportunity to see the photographs at first hand. On closer inspection their surface is not immaculate. They are consciously flawed, which is itself a comment on our visually saturated environment. The viewer can participate in their fiction or look deeper and see pictures within pictures, a masquerade of props projecting different characters and stereotypes deeply entrenched in our shared visual and cultural representations.

Sherman’s reality is saturated with images through which we see the world. She offers us complicated representations of the world, where we cannot tell what is real and what is not. Through layers of artificiality and disguises Sherman tells a story of our aspirations and obsessions with image and status. Her versatile theatrical works provoke us to reassess our assumptions when looking at images.

The sex pictures portray dolls, often hybrids created from both female and male body parts, which simulate hard-core pornography. Dolls, which are usually fashioned as ideal female bodies, are made ugly and horrific. They challenge the fetishized and hyper-sexualized image of the young, slim, smooth body projected by the media and seen everywhere in contemporary society. The façade of make-up and artificial beauty enhancers exaggerated in the pictures of clowns show a tragic and vulgar reality governed cultural clichés and ideologies. It is a reality no longer entertaining but cruel.

The photographs mirror a contemporary culture of spectacle, narcissism and the cultivated self. The exhibition and the illustrations printed in the catalogue allow us to see our own reflection in the images  Sherman offers of the vicious circle of voyeurism and artificially imposed norms.