Charting the history of graphic design 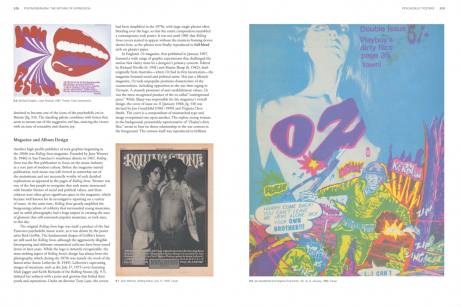 Graphic design is a relatively new art form. It emerged out of the Industrial Revolution and with the advent of the mass media. Indeed, the practice took time to be established and defined. The term ‘graphic design’ was coined in the 1920s and only became common usage during the post-war era.  It is now a mature and highly sophisticated practice, but also one often in a state of flux.

Graphic Design: A History by American professor Stephen J. Eskilson is an ambitious, authoritative and welcome account of the historical development of the art form. This new edition draws on recent scholarship, has a new chapter on 19th-century design, which the author feels has been unjustly maligned, and an updated section on contemporary developments.  It has an impressive sweep and particular approach: from the 16th century to the present, discussing seminal developments in relation to wider social contexts, rather than just the work of key designers. Eskilson sees graphic design and typography as deeply ‘embedded in the fabric of society’. Indeed, his engaging, accessible narrative relates the practice to historical period very well, while also explaining changing aesthetic, conceptual and technical concerns. Allied areas are examined too, such as popular culture (pulp magazines, record album covers) along with modern art, architecture and film which Eskilson sees graphic design as having an ‘aesthetic communality’ with.

The book takes us from the origins of typography with the invention of moveable type in mid-16th-century Germany, through the impact of the Industrial Revolution and fashions such as the Art Nouveau movement in Europe and America. We see not only florid graphics by artists such as Toulouse-Lautrec, but also the links to painting, applied arts and interior design. First World War propaganda imagery used ‘emasculation’ strategies: the questioning of male virility and courage by governments and designers to emotionally blackmail those not yet enlisted. This is clear in the infamous 1915 British poster Daddy, what did YOU do in the Great War? featuring a shamefaced father being questioned by his children.

The interwar years saw the tremendous impact of avant-garde modern art movements such as Russian Constructivism, the Dutch De Stijl group (‘The Style’) and the German design school the Bauhaus, on graphic design, and this still resonates today. The result was an international style of planar designs using blocks of primary colours and unadorned typefaces; the so-called ‘New Typography’ seen by its advocates as expressive of the modern age and the paragon of visual communication. New techniques such as photomontage – the juxtaposing of photographic images and text – were also quickly incorporated into graphic design, as in promotion material for the Bauhaus by the Austrian designer Herbert Bayer during the 1920s, and later ironically by the media savvy Nazis.

There is a fine section on American magazine design and how publishers like magnate Condé Nast from the 1920s onwards revolutionized mass publications. For example, Vanity Fair, the arts magazine for America’s clattering classes made much use of Art Deco design and Vogue elevated fashion photography and layouts to an art form thanks to figures such as British photographer Cecil Beaton and Cipe Pineles, the Austrian-born female art director. In the Great Depression of the 1930s the US government mobilized graphic design to get the country back on its feet. American innovations in corporate identity in the post-war boom years are discussed too, notably the work of Paul Rand, who provided iconic logos for blue-chip companies such as IBM.

From the 1990s, radical changes were brought about by digital technology, which engendered the DIY (‘design-it-yourself) phenomenon and a proliferation of highly experimental yet often barely legible typefaces. A sleek, techno ‘digital aesthetic’ derived from the virtual world of computer games was championed in the pages of cutting edge design magazines such as Wired. Eskilson also charts the rise of  ‘motion graphics’, which employs advanced software to produce complex animated title credits for film and television. Graphic design is now a global affair: for instance, the Singapore-based design firm ‘Phunk Studio’ is a major player, with designers frequently drawing on diverse, non-Western cultural forms such as animé (Japanese animation), and encompassing website design and new media.

Graphic Design: A Historyhas nearly 600 high-quality illustrations making it an invaluable visual resource and a pleasure to look through. Many are full and double page such as the arresting 1936 poster for an American zoo featuring a fierce, sprawling panther. The designers at Laurence King are to be congratulated, especially on the use of striking double page spreads that draw on the design of a particular period to herald each chapter. For example, the spread marking the section on the ‘International Style’, the ubiquitous post-war rational, minimalist look, uses one of the dynamic pictograms for the 1972 Olympics by German designer Otl Aicher. There is also a helpful glossary and extensive bibliography, although Eskilson’s cursory conclusion does not do his book justice. This history, whose rich content can only be outlined here, should be on the bookshelf of anyone deeply interested in graphic design and visual culture; professional or layperson, especially those who want a lucid summary of contemporary design.