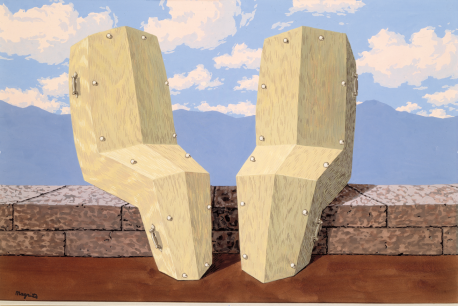 Over the course of 20 years, David Sylvester and Sarah Whitfield compiled five volumes attempting to document all  the oils, gouaches and sculptures made by Belgian Surrealist René Magritte. The last volume of this sterling endeavour appeared in 1997. In art history, however, things are rarely exactly settled. The authors of this catalogue raisonné noted that there were certain paintings that were known to have existed but could no longer be traced, some works they could not verify because they had been unable to examine them properly, and titles on lists that may have been slips for known works or genuine unidentified works. Magritte was a prolific artist so inevitably pictures slipped past the authors. A sixth volume was needed.

A Comité Magritte was formed in 2000 to authenticate works that had not appeared in the Magritte catalogue raisonné (MCR). Most of the presentations involved owners wishing to authenticate pieces before sale to private collectors, so no sooner had the piece surfaced then it returned to obscurity. Happily, Musée Magritte was able to secure a selection of these works for a 2012 exhibition held from May until September at the Musée Magritte in Brussels. Some of the pictures on display had never previously been exhibited and were interspersed with loans and pictures from the museum’s own holdings.

Both exhibition and book were excitingly (though slightly misleadingly) respectively subtitled ‘Rediscovered’ and ‘Newly Discovered’ . On the strength of the subtitles we might expect a cache of unseen works found in an attic but the actuality is less dramatic.

The sixth volume of the MCR (which acted as the exhibition catalogue) breaks with the preceding volumes in two respects. Firstly, it is in colour whereas the earlier volumes had only black-and-white illustrations. Secondly, it includes drawings, which were only used as comparative figures in the other volumes. In that respect, the new title acts as a report on the findings of the Comité Magritte over and above amending the previous MCR volumes.

As one might expect given their value and prominence, there are only 13 ‘new’ oils, with the bulk of the book being devoted to gouaches (31) and drawings (81). As oil paintings are more likely to be listed in catalogues and shipping lists, most of the ‘new’ oil paintings were already known to some degree, with only a few being completely unexpected. Throughout this group of works we find Magritte not doing new things but reiterating his trusted methods of dislocation, juxtaposition and metamorphosis using his usual repertoire. Viewers knowledgeable about Magritte will find the pictures both strange and familiar.

One of the surprises is Untitled (c.1935), a peculiar work – a nocturne employing simple architectural forms, a sphere and a full moon (which echoes the sphere on the ground). The picture is very sparse, atypically so. The MCR notes that the work was used by the first owner, playwright Ernst Moerman, in the production of a play, without venturing to suggest that the picture’s aberrant nature may be because Moerman commissioned it with a view to using in a theatrical way, either as a prop or a backdrop design. Another unexpected encounter is a dressing screen painted with an abstract design, doubtless a commission accepted purely for monetary motives.

There are a number of gouaches featuring terraces that include invisible houses – discernible only because of their visible windows floating between the solid houses either side. We encounter Magrittean angled coffins posed anthropomorphically. One exhilarating conceit (The Shell Collector (1952)) is a view of an endless parapet of wall with windows, traversed by a hot-air balloon. It is like a shot from Terry Gilliam’s film Brazil. Coming across such previously unseen inventions gives us the uncanny impression that Magritte is still alive somewhere and working on new compositions. It is a peculiar form of immortality.

The drawings range from highly finished pictures designed for publication to rough sketches. The discovery of certain drawings has adjusted the dating of related paintings, pushing two oils back from 1933 to 1932, and so these drawings are evidence for the artist’s chronology. (There is a project in progress to catalogue all Magritte’s drawings.) Magritte used to include drawings with letters, explaining new solutions to philosophical problems and as thank-you gifts. Unfortunately, many of the letter drawings are in ballpoint ink on ordinary paper, not stable or long-lived materials. The composition scribbles recapitulate famous paintings and images that never made it into paint because they were throwaway musings, were unsuitable or (in the instance of very late examples) because the artist’s death in 1967 forestalled their development.

There is much in this new title to keep scholars and fans of Magritte engrossed.