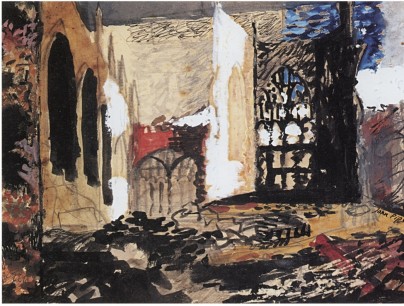 John Piper: The Forties is in fact a reprint of a book first published in 2000 when the Imperial War Museum held an exhibition of the same name.  This was one in a series devoted to putting into context the work of individual artists who had worked as war artists at some point in their careers.  Piper’s commissions for the War Artists Advisory Committee are therefore well represented. These range from the almost-abstract 1940 depictions of the underground control room of the Regional Headquarters in Bristol, through the atmospheric evocation of war damage to historic buildings in Bristol, Bath and Coventry, to the perhaps less successful records of ships and trains for the Ministry of War Transport as the war drew to a close.

David Fraser Jenkins draws telling visual correspondences between Piper’s well-known painting of Coventry Cathedral, 15 November 1940 and his later designs for stained glass for the new Cathedral (which recently celebrated its 50th anniversary with an exhibition, ‘Journey into Light’ (see box right), which included work by Piper), noting that ‘this triumphant design remains an extraordinary echo from one of the lowest points of the war’.

These commissions are, however, only part of the story being told, and what emerges from both text and images is a vivid account of all the other things Piper was doing during this important decade for the development of his art.   While personal travel around Britain to visit sites of both architectural and landscape interest, which he clearly enjoyed, was of necessity curtailed during the war years, he made a significant contribution to the Recording Britain project sponsored by the Pilgrim Trust, covering Oxfordshire, Berkshire and Buckinghamshire with drawings such as The Barn at Great Coxwell.  He was also tasked, after suitable ‘vetting’, with making drawings of Windsor Castle, and a number the works he produced are included, in particular those done from the roof, such as The Round Tower from the Roof of St George’s Chapel.

Piper’s designs for the stage also feature strongly, including those for Sadler’s Wells ballet’s The Quest of 1943, and the post-war Job, A Mask for Dancing (1948), for which Piper drew inspiration from the work of William Blake, as seen in the final two plates of his versions of Heaven and Hell.  The final chapter of the introductory text, on ‘Neo-Romanticism’, is valuable in putting this in context; Jenkins notes that Piper ‘hated the restriction of labels.  He did, however, often imply that he would be happy to be thought part of a continuing Romantic tradition of British art’.

Discussing Piper’s pre-war practice early in the book, Jenkins tells us that ‘Piper’s political sympathies remained a constant background, and this attitude led him to think of art in terms of the ordinary public’. The fact that this book has been reprinted some 12 years after the original exhibition is evidence of the continuing widespread popularity of Piper’s work.

Journey into the Light
Held in September and October 2012 ‘Journey into the Light’explored the inspirational journey followed by Sir Jacob Epstein, Graham Sutherland, John Piper, John Hutton, Geoffrey Clarke, Elisabeth Frink and others whose art was commissioned for the newly built Coventry Cathedral. Many of the artworks in the cathedral are now recognised as amongst the highest achievements of 20th-century Christian art.

The Pilgrim Trust
The Pilgrim Trust was an American organisation that sponsored the 'Recording Britain' project during the Second World War. The idea was to preserve a record of (mostly) English buildings deemed important, that might be lost if the country were invaded or if the areas concerned were bombed.