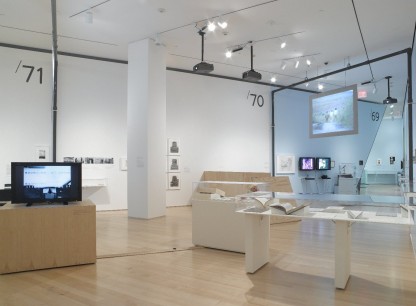 This is the exhibition of the book. Lucy Lippard’s annotated bibliography, Six Years (published in 1973), has perhaps the longest subtitle of any art book (87 words). Its theme is the ‘dematerialization of the art object’ in the six years between 1966 and 1972. Lippard explains in her original preface  that this means ‘a de-emphasis on material aspects (uniqueness, permanence, decorative attractiveness)’, i.e. primarily conceptual art, where the idea is more important that its manifestation.

‘Materializing “Six Years”’, curated by Catherine Morris and Vincent Bonin, is on exhibition in the Elizabeth A. Sackler Center for Feminist Art on the Fourth Floor of the Brooklyn Museum in the space around the permanent installation of Judy Chicago’s The Dinner Party (1974–9) . The exhibition is laid out chronologically, one section for each of the six years, divided by screens suspended from the ceiling on which (normally – there are some still photographs later) films from the relevant years are projected on either side. Some of the art objects are later versions of the original pieces and an exhibition structured on dates always creates confusion between dates of creation and publication.

What is noteworthy is the amount of material borrowed from libraries and archives, as if the institutional curatorial world had been slow to grasp both what conceptual art was and that the documentation that was both the origin and trace of the work was worth collecting. A little coda exhibition outside the Brooklyn Museum Library (as well as its loans to the exhibition) reinforces this point.

The exhibition begins in 1966 with Lippard’s curation of the ‘Eccentric Abstraction’ exhibition at the Fischbach Gallery, New York, which included the ‘anti-form’ work of Eva Hesse, Louise Bourgeois, Keith Sonnier and Bruce Nauman. A more direct challenge to formalism and to the ex-Marxist high-priest of abstract expressionist criticism, Clement Greenberg, was the mastication and dissolution in acid, by John Latham  (and Barry Flanagan), of the St Martin’s School of Art Library copy of Art and Culture. This is a loan from the Museum of Modern Art, New York. It is dated 1966–9 and might well have been refined over a much longer period.

1967 includes early Art & Language pieces and the then separate work of Joseph Kosuth (The Museum of Normal Art). Ed Ruscha’s Royal Road Test, a spiral-bound artist’s book, photographically documents the destruction of a Royal-brand typewriter ejected from a speeding Buick. Brian O’Doherty’s Aspen, no 5–6, winter, 1967 is a magazine in a box containing works by Sol LeWitt and Mel Bochner, and texts by Susan Sontag, Michel Butor and Roland Barthes. The way it is displayed here is rather pedestrian, and it would have been better to have Dan Graham’s Schema for a Set of Pages displayed as it is illustrated in the book Six Years.

Latin America features strongly in the 1968 section, with the New York Graphic Workshop (expatriate Latin American artists, including Luis Camnitzer) and the Rosario group, whom Lippard had met on a visit to Argentina. That year also saw  the beginning of publication in Amsterdam of the art & project bulletin and Seth Siegelaub/Jack Wendler’s Xerox Book, which was printed offset rather than Xeroxed. Carl Andre, Robert Barry, Douglas Huebler, Joseph Kosuth, Sol LeWitt, Robert Morris, Lawrence Weiner had been allocated 25 pages with which to do what they wanted using the Xerox medium: this was in effect an exhibition in the form of a publication.

In 1969 Lippard curated two exhibitions. The first was ‘Number 7’ at the Paula Cooper Gallery, a benefit for the Art Workers’ Coalition (AWC). Morris and Bonin decide to show the announcement card and a photograph of Rosemarie Castoro’s Cracking $7 installation. Lippard’s book, however, gives  a much fuller description and covers Lee Lozano’s Grass Piece in much detail. The second exhibition was Lippard’s first ‘Numbers’ show in Seattle in September 1969 – the ‘number’ concerned derived from the population figure of each city in which the show was exhibited. Lippard used a standard form to elicit the artist’s project/work, which was executed  by others and documented on an index card. Again the ‘Six Years’ account adds significantly to the exhibition captions.

Bas Jan Adler’s 16mm black-and-white silent film, I’m too sad to tell you, a close-up of the artist crying, opens the 1970 section. This includes photographs by the Bernd and Hilla Becher, the Vancouver showing of ‘Numbers’, Kynaston McShine’s ‘Information’ exhibition at the Museum of Modern Art, Avalanche magazine, and ‘Artists & Photographs’, a box of artists’ contributions from mel Bochner to Andy Warhol. The 1970 and 1971 sections are larger than earlier sections and the space ceases to be linear, a drainpipe construction dividing the years from one corner.

The 1971 section has much photographic work – Dan Graham, John Baldessari,  and Alan Ruppersberg. Also included is Eleanor Antin’s ‘Boots’ project in which 100 boots were placed in different settings and photographed, the photographs later being turned into postcards and posted to around 1000 recipients. This section also contains my favourite piece, Letter to Uruguayan President Jorge Pacheco Areco, September 18, 1971 by Orders & Co. in which the artists instruct the Uruguayan President to walk or to check that his fly is closed before leaving home, addressing the asymmetry of power by ordering him to do things that he could not avoid doing.

There is an epilogue section which looks at Lippard’s attempt to address the question she had often faced about the paucity of women conceptual artists. This is hidden away and takes us into 1973, after the period covered by Six Years.

Although the exhibition succeeds in bringing Lippard’s Six Years to new audiences and in exploring Lippard’s role as curator, critic and writer, it does not have the richness of cross-reference of the book, and in this respect the book serves as a better companion to the exhibition than the exhibition catalogue. The exhibition overstates the political aspects – Six Years’ subtitle had included the bracket ‘(with occasional political overtones)’, and underplays the roles of Seth Siegelaub and Peter Townsend, the editor of Studio International, in creating artists’ spaces in mainstream art magazines.

BUY Six Years: The Dematerialization of the Art Object FROM AMAZON

‘Materializing “Six Years”: Lucy R. Lippard and the Emergence of Conceptual Art’ is at the Brooklyn Museum  until  3 February  2013