The wild and cultivated world of the pearl 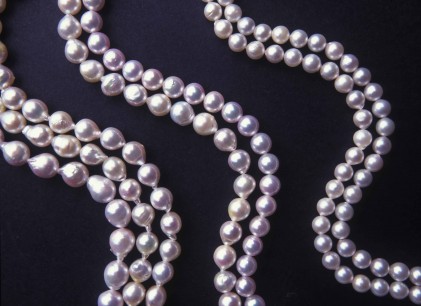 Pearls have been adored and worn by both men and women throughout time, as Jenny Kingsley discovers

You would have to be a jellyfish to resist the allure of the pearl, in light of its sensuous qualities – the curvature, smoothness of touch, soft radiance – the feelings of purity the creamy specimens evoke, the exotic aura the darker coloured ones exude, the semblance of elegance inspired by a restrained lustre. Moreover, there are its religious, mythological and political associations, lavish pearl adornment symbolizing power and wealth. The beautiful pearl is worlds apart from the sharp edged, tough, super glitzy diamond.

In light of my accolade, I recall a ‘pearl’ talk I attended recently by pearl designer Christianne Douglas. A very good friend, who looks a little like Catherine Deneuve and always wears pearls, invited me to the talk. But I was wary of accepting. Would the occasion be a means of encouraging one to buy? Would I feel out of place in a crowd of rich, over-Botoxed women who lunch on whispering rocket leaves and poached wild salmon? When I go to talks given by admirable authors who are at the same time promoting their latest opus, I’m usually happy to buy a copy of the masterpiece. A writer’s life is rarely one of fortune. But a book is not the same as a strand of pearls, my bank manager would say. Would the lady pearl fisher make me feel uncomfortable?

But, no, Christianne Douglas is not pushy. In fact I left the shop wondering how she makes any money at all. She is not an aggressive salesperson and exemplifies her belief that ‘non-flashy, gentle and subtle people like pearls’. Christianne is a true professional in every sense of the word. She tells us – a group of women of quite diverse backgrounds and ages – about the social, cultural and political history of pearls, the origins and types of natural, cultured and imitation pearls. What is an Akoya? What is a Mabe? (Both are varieties of seawater-cultured pearls.) We contemplate how body shape and skin colour influence the allure of the look. A few of us, including me, become demonstration models donning lustrous strands. Golden pearls suit olive toned skin; white gems complement the pale faced.  A graduated row of pearls will slim down your neck or lengthen your face. We explore the practical as well as the phantasmagorical. Understanding the universe of pearls merits a lengthy dissertation.

As Edwin Streeter notes in his book, written in 1886, Pearls and Pearling Life: ‘no nation can boast a history in which place and favour have not been bought or sold by Pearls: and scarce a religion or sacred literature has existed in which they have not borne some venerable significance’. For example, the ideal state revealed in the New Testament envisages a city whose ‘ “Twelve gates were twelve pearls”’. In Indian mythology, the discovery of pearls is attributed to the god Vishnu. In China, about 2000 BC, pearls were used as a tribute. Babylonian priests and dignitaries wore strings of beautiful pearls. ‘Grecian men of rank wore one Pearl ear-ring in the right ear, while the women wore one in each ear.’ When Henry VIII met Anne of Cleves he reputedly wore a velvet cloak clasped with buttons of pearls, rubies and diamonds and a collar ornamented with pearls.

Pearls are thus not necessarily a woman’s domain. Even today ‘real’ men wear pearls or pearls products, such as mother of pearl cuff links or buttons, stud pearl earrings or leather and pearl necklaces and wristbands.

Once upon a time it was popularly believed that the pearl originated in the heads of boars or elephants, toads or frogs. I warm to the poetic notion that pearls were formed from tears of angels. But in reality, natural pearls are a quirk of nature, nurtured as a shield against an unwelcome invasion – a rare fortuitous deformity. Despite the thousands of different molluscs, only a few  – mostly freshwater mussels and saltwater oysters – give birth to pearls that become jewellery.

Ki Hackney and Diana Edkins explain the process in well-articulated detail in their book People and Pearls: as the mollusc feeds, it draws water through its shell. Particles in the water, such as those of coral, bone, shell or stone, may hurt the creature’s soft lining tissue. If the mollusc can’t expel a harmful intruder, it protects itself from injury by wrapping the invader in a cocoon of conchiolin…

a substance which neutralises the irritant and triggers the production of nacre… a pale substance composed of microscopic calcium carbonate crystals…the same lustrous coating known as mother-of-pearl when it sheaths the inside of these pearl-producing molluscs shells. The aggrieved mollusc continues to cover the irritant with layer upon layer of nacre for a period that can extend to many years. These layers harden to form a pearl.

The light travelling through the overlapping layers of nacre creates the prismatic rainbow effect characterizing the pearl’s exterior. Overfishing and pollution ensure that natural pearls are that much less likely to occur nowadays than in the past. The once most fertile sources, the Middle East, Pacific and even the United States, are no longer as productive.

Human intervention has enabled a continuous supply of pearls known as cultured pearls. The process involves implanting an irritant in the mollusc, so that the mollusc reacts by creating the nacreous coating that produces the pearl. Although others developed techniques for pearl cultivation it was Kokichi Mikimoto, the son of a noodle maker, who turned his discoveries into a million pound pearl industry in the early 20th century, earning himself the title ‘Pearl King’. Even today it is the Japanese who produce and market 75% of all the seawater cultured pearls in the world for an industry worth some three billion pounds.

Mikimoto so believed in his product’s legendary medicinal properties (a curative aid for leprosy, impotence, madness and measles, for example) that from the age of 20 he consumed two pearls, presumably crushed, for breakfast every day. Mikimoto held that pearls increased longevity:  he died aged 96.

Both natural and cultivated pearls are classified according to whether they originated in freshwater (rivers, lakes and streams) or seawater. Areas around China and Japan are good sources for freshwater pearls while the Persian Gulf and Red Sea are good sources for seawater pearls. But before pearls were cultured, only one oyster in 10,000 to 20,000 revealed a usable pearl of good quality. Christianne tells us that in 1917 Cartier established their New York premises when they sold a necklace of natural saltwater pearls, then valued at over one million dollars, to a woman in exchange for her town house.

It is the quality of the pearl – its colour, lustre, size (the famous La Peregrina pearl was as large as a pigeon’s egg, at least 2.5 cm) and shape, be they round or baroque (irregular) that determine its worth. A good indicator of quality is if you can see your face reflected in the lustrous surface of the pearl.  The larger and rounder ones have the greatest value today. Size and shape are the result of where the pearl grows inside the mollusc, the size and shape of the nucleus (in the case of cultured pearls) and how long the pearl has been ripening. The majority of jewellery-worthy pearls are used for necklaces, the 16-inch to 18-inch strands being the most popular.

And of course there are the imitation – ‘faux’, ‘simulated’ or ‘artificial’ – pearls.  They look like natural or cultured pearls but do not have the same organic chemical composition. They’re made with glass, ceramic, shell, alabaster, fish slime, wax or plastic and coated with a varnish or another substance, such as acrylic paint to make them look lustrous. They have no value as gemstones though the design and maker may add value. For example, costume jewellery designer Kenneth Jay Lane has achieved great fame with his faux pearls.

The best way to tell the difference between a natural and a cultured pearl is by x-ray so you can see if there is a ‘bead’ at the centre of the pearl. Natural pearls have smaller drill holes, as weight influences their value. For ease of stringing cultured pearls have a relatively large drill hole. A natural pearl strand may have variations in size, as it is takes so long to find pearls that match. The coating on the imitation pearls can easily chip off. Pass them across your teeth and they’ll feel smooth, unlike the real or cultured gem that feels gritty. (But this method can damage the goods!)

I’m glad my friend asked me to the talk, and I must confess I did return to the shop and make a modest purchase.

BUY People and Pearls FROM AMAZON

BUY Pearls and Pearling FROM AMAZON

To find out more about pearls, see the following books and website.