Wyatt the destroyer? A controversial architect 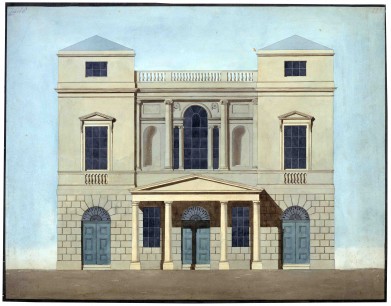 The beginning of Wyatt’s career could not have been more propitious. After spending six years in Italy – a long period for even the most serious student of architecture – his neo-classical designs for the Pantheon in Oxford Street brought him instant fame in 1772. He had hit the mark with fashionable taste, and that great arbiter of taste, Horace Walpole, declared it to be ‘the most beautiful edifice in England’. But controversy was already present, for Wyatthad imitated some designs of the Adam brothers, and they reacted to this new star in the architectural firmament by complaining – in print – of plagiarism.

Undaunted, Wyatt’s career progressed in leaps and bounds. He possessed great social skills, and his polish and manners enabled him to move easily in the grandest of circles. He was also happy to travel vast distances, with acoach fitted like an office so he could work en route to see his clients; he once estimated that he travelled on average 4,000 miles a year. Over the course of his career he worked in a great variety of styles: neo-classical, Gothic revival, and more imaginative Egyptian, Tudor, oriental. This facility showed eclectic abilities, but has not helped his later reputation, for no single style that was truly his, although he did develop more of his own ideas later in his career. During his lifetime, he became best known as an architect of the Gothic revival, in particular for the hugely eccentric Fonthill Abbey, a vast Gothic folly created for its equally eccentric owner William Beckford.

Once recognized as an expert on the neo-Gothic style, Wyatt was asked to ‘improve’ some of England’s greatest cathedrals. This work was generally commissioned for both aesthetic and structural reasons. But alas, Wyatt’s enthusiasm led to such drastic alterations to these revered buildings that (as Robinson himself admits) no aspect of Wyatt’s career was more controversial or did more harm to his posthumous reputation. At Durham, for example, he proposed the addition of a spire to the great tower, and changes to the interior which would have swept away much of the historic fabric. The controversy provoked by his plans prevented many of the alterations from being undertaken.

The fiercest personal attacks came from John Carter, who wrote over 200 pieces denouncing Wyatt, and became largely responsible for the one-sided view of ‘Wyatt the Destroyer’, a view shared by Pugin, and one that persists even today. Wyatt’s reputation has also been damaged by the loss of some of his most interesting buildings: the Pantheon interior of 1772 was destroyed by fire, Fonthill Abbey collapsed, many of his country houses and even his own London house and office have all disappeared.

Wyatt was also terribly unorganized, and he tended to take on more commissions than he had time to fulfil. He would start on each new contract with huge enthusiasm, and then move on to another new one with equal delight. Clients were left frustrated by his refusal to turn up and discuss progress, or to organize completion. And when he was appointed Surveyor General and Comptroller of the Office of Works in 1796, both the office and the finances fell into chaos and corruption.

Hence Wyatt (1746–1813) has been under-appreciated by architectural historians, and is not as well known as he should be to the general public. These facts underpin much of the discussion in this new publication, which provides a full account of his life and work as one of the foremost architects of the 18th century. Its author, John Martin Robinson, knows he has an uphill struggle in attempting to rehabilitate Wyatt’s reputation, given that so much of his work was controversial and  denigrated by both contemporary and later architectural commentators.

In this masterly volume, written by the acknowledged expert on Wyatt, we have both the architect and the man. The publication’s sub-title gives an indication of the status he enjoyed during his lifetime, as his burial in Westminster Abbey did at his death (though sadly his widow was left penniless, his lack of organization depriving her of what should have been a good income). But Robinson is even-handed in presenting the evidence and making his assessments, and we can now see, in the round, both the genius and the flaws of the man.