Fairy tales of the proletariat 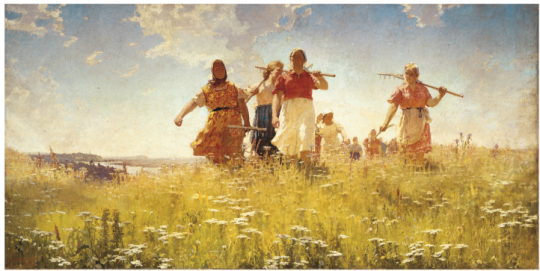 How should we look back and evaluate Soviet Socialist art today? This turns out to be a rather complicated question at a moment of art history that is not only post-Soviet but also post-modern. Back in the cold war era the dominant attitude  was straightforward, when the CIA promoted American Abstract Expressionism as a celebratory affirmation of Western freedom and individualism,  its negative was represented as Russian propagandist denial of free expression, manifested in Socialist Realism.

This book, published to accompany an exhibition at Rome’s Palazzo delle Esposizioni , October 2011 to January 2012, reveals the phenomenon not as monolithic and unquestioning but as a more nuanced and multifaceted movement, responding to a constantly shifting climate of political and ideological power. Under Stalin, Soviet artists and writers were nominated ‘engineers of the human soul’. Their outlook was required to ‘reflect reality’ and this reality was understood not to be the literal, present-day, observable  situation, but the promised ideal reality of the Communist revolution, free from conflict  or hardship.

But the pictorial means of achieving this were far from settled; a leading painter described the artist’s difficulties as like those confronting a cyclist; if he leans too far to the left in pursuit of nationalism, then too far to the right, following futurism, or keeps straight ahead towards a photographic realism, he is destined to wobble off course entirely.  Matthew Bown provides an authoritative historical account of the phases of Socialist Realism but what makes the book especially valuable to all who are interested in this major aspect of 20th-century art are the 18 short essays from a panel of international scholars, including a number of Russian art historians and curators, reviewing the legacy of the movement.

Topics include a study of Pavel Filonov, who had been a member of the avant-garde at the time of the October Revolution of 1917. Initially working in a style of mystical cubism, he transformed his practice to a near photo-realism in his factory scenes of the 1930s. The adoption, either intentional or unconscious, of pictorial rhetoric previously associated with religious representation (the original form of ‘propaganda’ anyway) is also noted.

We learn in another study of the ideological pitfalls encountered by the inclusion of a rubber plant in a depiction of a family apartment. Two studies are given of the place of Socialist Realism in locations outside the Soviet Union; in the German Democratic Republic (East Germany) where the native modernist  expressionist tendencies were recognized, and in France, where it emerged as the language of anti-American left-wing conviction, jarringly in conflict with School of Paris modernism.

Thoroughly recommended as a window on a tumultuous and crucial period in the history of the last century, it should also persuade us to refocus our critical vision and help us to consider different criteria for judging the purposes and qualities of art.