Inventing and reinventing the early years of abstraction at MoMA 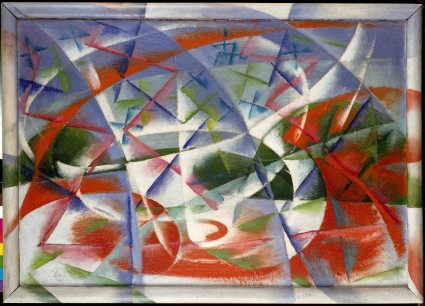 Herbert Hartel is impressed and disappointed by ‘Inventing Abstraction, 1910-1925’, at the Museum of Modern Art, New York

Abstract art has just turned 100 years old and the time to celebrate is now.  It is rare for the beginning of any style or movement to be dated so precisely.  Yet we can say that abstraction began around 1912 with the breakthrough paintings of Wassily Kandinsky, who was soon followed by artists across Europe and America.  The Museum of Modern Art in New York is currently devoting its sixth floor to a four-month celebration of the first 15 years of abstract art.  The exhibition is both impressive and disappointing for its scope and chosen examples of what best represents these artists and styles.  Although no exhibition this vast can truly be complete, there is as much to applaud as to lament about what is included or omitted in ‘Inventing Abstraction’.

The German painters who were essential at the start are poorly represented here.  Only two paintings by Kandinsky and one by Franz Marc are on view, and better examples of their work could have been chosen.  We are fortunate to see Kandinsky’s Impression III and Composition V, but many other excellent works have been overlooked.  Paul Klee is completely absent.  With Frantisek Kupka, we see several examples of his vertical line abstractions and two Localization of Graphic Motifs.  Yet his Amorpha and Disks of Newton are not included, even though MoMA owns one of them!  Mondrian is represented by ten works demonstrating his development through Cubism to Neoplasticism.  A quick comparison of Kandinsky and Mondrian as exhibited here shows how poorly the former has been treated.  Constantine Brancusi’s Bird in Space, which MoMA also owns, is not included.  Although a reconstruction of Tatlin’s Monument to the Third International is displayed, his earlier reliefs are not.  The inclusion of Dadaists such as Hans Arp and Kurt Schwitters makes sense because they were thinking about abstract imagery.  On the other hand, the inclusion of a few of Marcel Duchamp’s lesser-known readymades obfuscates how abstract art is being defined.

Nevertheless, the curators must be commended for their excellent choices of works to represent Robert Delaunay, Malevich, Léger, Ivan Kliun, Theo van Doesberg, El Lissitzky, Wyndham Lewis, Laszló Moholy-Nagy, Giacoma Balla and Georges Vantongerloo.  It is gratifying that they have included numerous women, including Sonia Delaunay, Lubov Popova, Sophie Tauber Arp, and Vanessa Bell.  They have remembered that abstraction was not limited to painting or sculpture, but also developed in photography, film, crafts and mixed-media assemblage.  Perhaps the most interesting ‘rediscovery’ is several lesser-known abstractionists from Western Europe and the United States, with some impressive works selected to represent them.  After 30-plus years of scholarship that has explored abstraction’s importance in Eastern Europe and the Soviet Union, it is nice to see Wyndham Lewis, Giacomo Balla, David Bomberg, Duncan Grant, Arthur Dove, Georgia O’Keeffe, Lawrence Atkinson, Morgan Russell, Viking Eggeling, and Alvin Landon Coburn included.

The exhibition opens with a mural-sized orange graph that diagrams the numerous connections and relationships among artists, styles and movements.  It is the creation of designers at MoMA and is a 21st-century, digital-cyber revision of Alfred H. Barr’s famous diagram of modernist styles that was first published in MoMA’s exhibition catalogue Cubism and Abstract Art.  It is best viewed on a computer, where you can click on an artist and study his network of relationships more carefully.  With a few more clicks of your mouse, you can see works by that artist in the exhibition and a short biography in outline format.  This graph is an intriguing tool that may prove useful at times, but it is still prone to the over-simplification that plagued Barr’s diagram.

The catalogue is a sumptuously illustrated book with short essays about the many artists, styles, movements, events, groups, exhibitions, and influences in this period.  It was wise to organize the catalogue to such a massive exhibition as a companion survey rather than as an enormous guide to what is on view.  This approach allows the reader to see many more artworks and supporting materials in the catalogue than the exhibition space could ever accommodate and for the authors to discuss artworks not on view.  Using many short essays seems a helpful, fresh way of organizing the multiplicity of developments, many of them short-lived and concurrent.  Some essays were contributed by well-known scholars, but most are by less recognizable authors.

Unfortunately, as a general overview, the catalogue is incomplete, very skewed and sometimes misleading.  Most of the authors have adopted overly formalist approaches that are disconnected from what the past 40 years of scholarship have taught us, and feel blatantly reactionary.  Much of the social, political and philosophical background of this era has been ignored, dismissed or trivialized.  Spirituality and mysticism, the reaction against 19th-century positivism, the global turmoil of the First World War, Wilhelm Worringer’s concept of empathy, and synaesthesia are mostly absent.

Yves-Alain Bois discusses Mondrian and de Stijl in very formalist ways, and when he briefly refers to Mondrian’s spiritualist leanings, he avoids mentioning Theosophy in favor of vague terms such as ‘universal’ and ‘utopian’.  Leah Dickerman’s essays on Kandinsky discuss the influence of music on him but do so in a misguided way that discards much of what earlier scholarship has demonstrated quite well.  She sees Kandinsky as using the music of Richard Wagner in a very methodical manner, but says nothing about the greater influence that Arnold Schoenberg had on him.  The importance of synaesthesia as a broader idea and inspiration is not discussed.  Dickerman overstates the importance of Kandinsky’s poetry and how it connects him to Dada.  It also leads her to interpret his work semiotically, which is bizarre revisionism that broadly misrepresents the artist.  The semiotic method simply does not work for Kandinsky and yet has been forced on him and other artists here.  The horsemen in question in Kandinsky’s paintings, as mentioned in the online biography, are the horsemen of the Apocalypse and Saint George.  These Biblical stories were part of the artist’s basis for gradually leading viewers to understanding total abstraction by using these widely known Biblical and mythic stories as points of reference.

The curators seem to share an undeclared agenda of rewriting history to eliminate the spiritual and mystical from early abstraction, even if they must ignore and dismiss evidence to the contrary.  An exhibition as broad in scope as this one is not the place for drastic new interpretations; that is the purview of more specialized literature.  The authors are clearly more comfortable discussing abstraction that was inspired by technology, scientific developments, industrialization and urbanism.  Not surprisingly, the essays on the Delaunays, Léger, Lewis, and Picabia are more cogent and helpful.  When Lanka Tattersall discusses Kupka’s mysticism, she conflates her own skepticism about its importance with the doubts he supposedly experienced.  Her argument that Kupka’s mysticism waned in the years before his work became abstract is very unpersuasive.  Michael R. Taylor claims that Picabia’s abstract paintings were largely motivated by his frustration with the abundant discussion of the spiritual in early abstract art.  Taylor complains erroneously that abstraction has been dominated by the mystical and spiritual, which has crowded out other possible interpretations and artists who were not spiritual.  Spirituality is not the only way to understand abstraction, even though it was crucial for some of its pioneers.

‘Inventing Abstraction,1910-1925’ is worth visiting for the opportunity to see many great artworks.  The rapid evolution and incredible variety of early abstraction can be readily appreciated here. One should be aware, however, that the selection of works and the catalogue essays sometimes misrepresents history by offering scholarship that is dubious at best.  ‘Inventing Abstraction, 1910–1925 is an impressive undertaking that could have been a greater scholarly event.