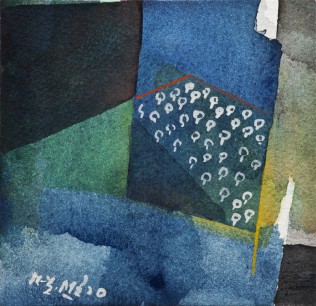 Two artists from different generations, amongst some others, are at the vanguard of the modern and contemporary Indian art scene. One is the veteran abstractionist Ganesh Haloi, and the other, Paresh Maity, a contemporary artist in his late forties.

A show of Ganesh Haloi has been unveiled at Calcutta’s well-known art gallery, Akar Prakar. Ganesh Haloi is amongst a few artists who still use media that emerged from the early tradition of Indian painting. These make use of gouache or tempera on paper, which miniature artists also drew on. Most artists today have chosen oil, acrylic and/or transparent watercolour as their media. Sixty-seven Haloi works have been put on display at Akar Prakar.

Ganesh Haloi belongs to that group of modernists in Bengal (a major eastern state of India) who began their career in the late 1950s but whose career flourished during the 1980s. Before that, working for six long years at the ancient Ajanta (caves) for the Archaeological Survey of India, during the late 1950s and early 1960s, also played a pivotal role in recasting his visual sensibilities. The rich earthly hues and lyrical sinuous forms of Ajanta made their impact felt in the pictorial compositions Haloi executed subsequent to his Ajanta experience. In these, ochres, browns, and shades of green began dominating his colour palette.

The artist was also deeply affected by a British Council exhibition staged in Calcutta in 1967, which featured Robert Adams and Robert Meadows amongst many others. In the works of Meadows, in particular, Haloi discovered the resonance of his own concern for lines, planes and mass of colours. Nonetheless, like many of his generation, Haloi, though inspired by international art, developed his individualistic, indigenous art form.

Even so, Haloi’s oeuvre is very contemporary in its format and expression. ‘He is one of India’s most celebrated and sensitive abstractionists’, says Reena.

The majority of the works at Akar Prakar were executed between 2011 and 2013. In them, the artist has taken indigenous linear abstraction to the level of sublimity. Though each work is composed of simple lines, they end up transporting one into a transcendental space. ‘Haloi has shown that despite advancing age, he is reinventing himself’, observes Reena.

Haloi’s show at Akar Prakar is officially on till 5 April 5, but the gallery is considering an extension because of ‘popular demand’. The exhibit later moves to the Bangladesh capital, Dhaka. The proceeds from the sale of paintings at the Dhaka show will be donated to Ganesh Haloi’s village in Jamalpur in Bangladesh, where the artist spent his childhood.

The month of March also saw an exhibit of the New Delhi-based Paresh Maity travel to London’s Art 13 Fair in the first week of March. It was staged at the Grand Hall, Olympia. The exhibit displayed a series of 12 watercolour paintings titled, ‘River of Memories’. Maity had also created a ‘major’ installation depicting the story of our lives.

Incidentally, the exhibition was fielded by Bangalore’s Gallery Sumukha, based in the southern region of India. The only other Indian gallery at Art 13 was Bombay’s Volte. The London exhibit happens to be Paresh Maity’s sixty-second solo outing which, indeed is an enviable achievement for an artist in his late forties.

The metal trunks, that made up the installation, symbolize the association with them in our everyday lives. We use them for various purposes. While some utilize these largish boxes for stacking up garments, others could be keeping books or important documents and papers in these chests. I remember storing my paperworks and sketches in trunks as an art college student in Calcutta. In the Indian countryside, villagers quite often load these trunks with foodgrains that they harvest, says Paresh Maity: ‘This led me to title this installation, “The Story of our Life”.’

Well-known for his visual imagery, Paresh created the 12 paintings in rich, bold colours such as red, yellow, blue and green. These works portray familiar motifs such as human figures, musical instruments, birds and horses, to mention some. The paintings also take one back to Paresh’s affair with waterways and ponds in his childhood in Bengal’s obscure Tamluk town. Tamluk was the melting pot where Paresh Maity’s artistic sensibilities developed. Paresh  is also widely known for his brilliant Cubist works

Incidentally, Paresh Maity has been recognized by various national and international institutions including the Royal Watercolour Society, London, the All India Fine Arts and Crafts Society, British Council and other leading institutions. His work has been showcased in London, New York, Singapore, Germany, Hungary, Paris and Russia. Currently, he is represented in public and private collections all over the world, including the British Museum, the Commonwealth Development Corporation, and the National Gallery of Modern Art in New Delhi, to mention just a few.

In 2010, Paresh completed a massive 7 x 800 ft mural, one of the largest in the world, for the international terminal at New Delhi’s Indira Gandhi International Airport. The new terminal and Maity’s massive work were unveiled by the Indian prime minister, Manmohan Singh.