Passion, power and painting in Venice 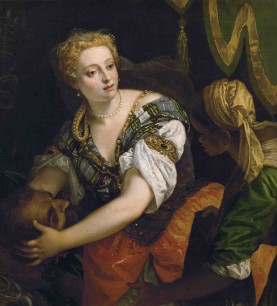 Masters of Venice: Renaissance Painters of Passion and Power

'What we call painting was invented by the Venetians'  (Cézanne)

Venice, a work of art in its own right, shimmering between sky and water, laid the foundation for the expansion of 'true painting' across Europe, from the 15th-century works of Giovanni Bellini,  through the 16th-century works of Giorgione, Titian, Tintoretto, Veronese and others – the 'Masters of Venice' of the title of this book.

So argues Sylvia Ferino, director of the Painting Galleries of the Kunsthistorisches Museum of Vienna, in the introductory survey to this volume.  She produces a glittering, crystallized account of Venice and the history of its painting, which she and many others believe was destined to change the course of European art history.

The exhibition, also titled ‘Masters of Venice’, showed at the de Young Museum, San Francisco from October 2011 to February 2012.  A temporary de-installation of the Kunsthistoriches' Venetian paintings to provide space for a special exhibition prompted the de Young to stage this show of Venetian works, introducing them to an American audience.  Religious works, portraits, classical themes and the female nude were all represented. Set within the context of the collecting activities of Viennese emperors from the 16th to the 19th centuries, the 50 works represented here include such artists as Titian, Tintoretto, Veronese, Palma Vecchio, Bassano and others and give us an idea of the achievements of 16th-century Venetian artists.

Ferino sets the achievements of these artists fully within the historical context of the Venetian state, first under the Byzantine Empire and then later under the authority of the Doge, where a certain independence and distinctive type of government were forged.  Drawing attention to the close ties between Venetian politics and religion (the central church of San Marco was also the chapel of the Doge), Ferino show how art was used to glorify the power of the Venetian maritime and terra firma republic. The paintings in the Doge's Palace transform these claims of sovereignty and strength into mythologized flesh and blood.  For example, in Veronese's Triumph of Venice (c.1579–82) Venice is portrayed as a woman in the process of being crowned. Venice's multicultural society of international traders, its place in the vanguard of the printing revolution, which ensured a stream of literary texts, and its famous celebrations and parades all find their way into the art of the period.

The discussion of individual artists begins in depth with Giovanni Bellini (1430?–1516), an artist of profound expression and technical mastery, and the teacher of numerous others, including Giorgione and Titian.  The hallmarks of Venetian painting can be seen in Bellini's work, in particular the use of colour, light and texture.

Mantegna (1430?–1506), brother-in-law to Bellini, receives detailed consideration although he was not truly a Venetian, being brought up in Padua, part of Venice's land empire. He became official painter at the Gonzaga court of Mantua.  There is, in any case,  little doubt that Padua was influential in the development of Venetian art as it was here that both Florentines and Venetians worked together, particularly on the decoration of the Basilica di Sant'Antonio.

There is in-depth discussion of Giorgione, enigmatic, innovator of allegories and atmospheric settings; Titian, versatile, confident, socially aware, a dynamic portrait painter with an international clientele; Tintoretto, ambitious, thrusting, with a fast and vigorous style; Veronese, refined and elegant with a decorative, sensuous intensity for spectacle and pageantry. A further chapter discusses artists of the Venetian hinterland, the Veneto, including Palma Vecchio, Pordenone (Giovanni Antonio de' Sacchi), and Paris Bordone.

The methods of Venetian painting, including the increasingly bold application of paint, the vibrant use of colour and the development of atmosphere and dramatic narrative, were aided by the use of increasingly rough canvas in place of wooden panel and the introduction of oil paint. A most illuminating chapter on these technical features is contributed by Elke Oberthaler.

The colour plates of every work in the exhibition are beautifully reproduced and grouped together by artist.  The text is liberally illustrated with many works referenced in the essays.  Here is an excellent and accessible introduction to the themes of the 16th-century Venetian Renaissance, not overlooking the earlier 15th-century development. All this is clearly linked to the wider future developments in European painting.  It is a celebration of  radiant colour and rich effects, emotional and sensuous depictions, dazzling treatment of light and above all the amazing virtuosity and accomplishments of these 'Masters of Venice'.