Claes Oldenburg: ‘Every side-walk is a ray gun beach’ 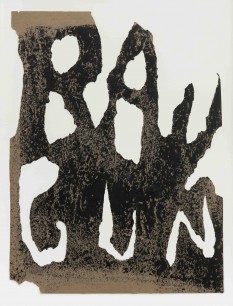 This is a show not to be missed,  even though the Museum of Modern Art showing is a slimmed-down version of  ‘Claes Oldenburg: The Sixties’, organized by and beginning at the Museum moderner Kunst Stiftung Ludwig Wien in February 2012. Here it has a much tighter focus on Oldenburg’s activities in New York in the 1960s, and Oldenburg (b.1929) has lent many items from his personal collection. It is all the better for this focus.

Today, there is a tendency in art history to see the influence of sculpture on painting everywhere. Here, the influence is clearly the other way round. For the first week of this show, it overlapped for a day with ‘Inventing Abstraction, 1910–1925’   in the adjacent sixth-floor gallery and this resonated in my mind as I went around the Oldenburg show. One can see plainly the relationship between Oldenburg and abstract expressionism: his Cash Register (1961) from ‘The Store’ – muslin soaked in plaster over a wire frame and painted in enamel – is a Jackson Pollock painting compacted, 2D transformed into 3D. The register is the colour of money – silver, on which Oldenburg has dripped blue, red and yellow enamel paint – another reflection of the role of performance in abstract expressionism.

The exhibition is split between the sixth floor and the second floor, where the Mouse Museum/Ray Gun Wing are on show. The upstairs section begins with a selection of monoprints of graffiti figures and Ray Gun posters (1959–60) from the artist’s own collection. Together with ‘The Street’ and its cardboard, burlap, papier-mâché shapes, cut-and-pasted and painted with casein, these suggest the anti-art/art brut influence of Jean Dubuffet (1901–85), who had shown regularly in New York from 1947 (culminating in a 1962 show at the Museum of Modern Art). At the press preview Oldenburg joked that had he been living in the Upper East Side of Manhattan, rather than the Lower East Side, the subject matter of his art would have been very different. The Lower East Side and its burnt-out buildings, barking dogs, trash, street signs and street chicks is evoked in fragmentary images and objects.

The Store was created in December 1961 when Oldenburg rented an East 2ndStreet storefront where over 100 objects were on display (and for sale): there were wall-mounted or free-standing ‘simulacra’ of dresses, panties, girdles, bras, shirts, ties, hats, watches, tires, frying pans, coffee cups, cigarettes, chocolates, ice cream cones, sausages, slices of pie, and loaves of breads. Many of the works used cheap, readily available materials: they often began with an armature of chicken wire overlaid with canvas soaked with plaster, and painted with enamel straight out of the can. Plaster was too heavy for large-scale works so the soft sculptures evolved with the help of his wife, Patty Mucha, a skilled seamstress: Floor Burger (1962) is a huge 52 x 84 x 84-inch floor sculpture made from canvas filled with cardboard boxes and painted with acrylic. It is interesting to speculate on the connections (if any) with the work of  the US Pop artist Jann Haworth, as in her Donuts, Coffee Cups and Comic (1962), made from cotton, thread, kapok and wood (WAVE, Wolverhampton).

In the Marron atrium are two architectural structures, Mouse Museum and Ray Gun Wing, consisting of found objects alongside Oldenburg’s own sculptural experiments. These are both on loan from the Austrian Ludwig Foundation, Vienna. The Mouse Museum  (1965–77) is housed in a geometric mouse-shaped structure made of wood and corrugated aluminum in which 385 objects are displayed in Plexiglas display cases.  Three nylon ‘Geometric Mouse’ banners (1969) hang on the atrium wall. The objects had been collected by Oldenburg and displayed as the ‘museum of popular art, n.y.c.’ in his 14th Street loft, where he had moved in 1965. This was displayed at Documenta, Kassel in 1972. The adjacent Ray Gun Wing (1969–77) is made from wood and corrugated aluminum in a rough gun shape. Inside the Plexiglas display cases are displayed 258 ray-gun specimens, from brightly coloured toy ray-guns to objects with a similar shape: Oldenburg’s selection criterion was whether it looked like, felt, reminded him of a ray-gun or could be declared by diktat of the artist, arbitrarily, as one – they might be found, acquired or donated.

Collecting Ray Guns can be practised anywhere, on a beach for example, but New York is the most interesting place because of the extraordinary quantity and variety of trash in the streets and its movements. Every side-walk is a Ray Gun Beach.

There is a clear overlap with the Fluxus multiples projects where found objects were encased in transparent plastic. And there are parallels with Marcel Broodthaers’ Musée d’art moderne. Départment des Aigles [Department of Eagles} (1968–) and with Herbert Distel’s Museum of Drawers (1970–7). Oldenburg has become the curator of New York street life and has blurred the edge between the found and art: art can be made to look like the found, and the found look like art.

I have studiously avoided the label of ‘Pop art’, which for me summons up the ‘cynical’ strategies of a Lichtenstein or a Warhol. These early works by Oldenburg have a rawness, brashness and humour that, for me at least, makes such a label inappropriate.