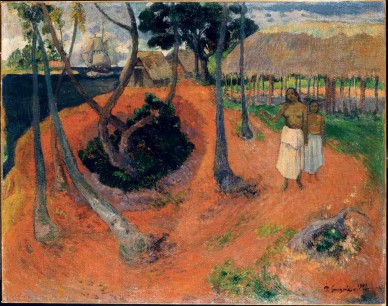 The magic words ‘Van Gogh’ conjure up a vision of landscape deeply personal and individually expressed.  The other artists included in this exhibition are many and often much less famous except in their native countries. The concept of Symbolist landscape needs introduction as it is a ‘state of mind’ rather than a style: ‘the sublime meets science’, perhaps.   It also has musical and poetical parallels.

This catalogue of a show that toured in late 2012/early 2013 is a book of essays, with illustrations of paintings that may have been included in one or other of the venues – or not at all.   De Chirico is mentioned even though no painting of his was included at any of the three venues, as was the case with two key works for the Symbolist movement, The Talisman by Sérusier and Bocklin’s  The Isle of the Dead.  The exhibition visitor was required to do some jumping through hoops of scale and tone, and the book cannot reflect that experience.   Whistler’s nocturnes come off particularly sadly in reproduction, but is he really a Symbolist artist?

The Symbolist landscape seems to have been principally a northern European concept – sometimes linked to nationalism, and perhaps the result of the most northerly countries being more landscape than cityscape.   Artists from Finland, Norway, Czech, Poland, Lithuania and Russia augment more familiar names; so this is truly a pan-European assemblage with discoveries to be made.

A surprising number of the artists discussed are French, an indication of the influence of French art at the time

In Edinburgh the hang included their two Gauguins and a later Monet of Haystacks (1891).  Gauguin is more associated with synthetic rather than Symbolist landscape, but like so many labels these might be hard to separate.    Handsomely exhibited in the Scottish Royal Academy rooms, each work was allowed room to speak.   Some of them are very large.  G. F. Watts’ After the Deluge and Walter Crane’s striking The Horses of Neptune (from Munich) stood up very well to the powerful competition offered by substantial works such as   the Polish Jacek Malczewski’s In the Dust Storm, which is probably rarely seen outside its home of Poznan.  The rooms were divided into themes – ‘Arcadia’, ‘Dreams and Visions’ and so on. ‘Towards Abstraction’ – with two Kandinskys, two Mondrians and a Whistler or two – provided a stunning finale to the exhibition.  Kandinksy’s Cossacks is hardly a landscape, but Mondrian’s almost-abstract Dutch landscapes are haunting enough.  Edvard Munch’s work was shown in ‘Rhythms of Nature’ in a stunning piece of picture hanging.

The useful essays by the contributors explain the thinking behind  the title and provide a background to the idea of a landscape painted more to reflect the artist’s feeling than to show you the topography.   Some of them are more helpful than others.  Those by Richard Thomson on ‘The Cosmos and the Rhythm of Nature  and ‘Into the Mystic’ were more for the initiated history of art student than the average reader.

Whether the average visitor would read the catalogue, reviewed here, one wonders (there was no hand list). The book has a full list of all the works shown in Amsterdam, Edinburgh and Helsinki and handy biographies of all the artists.  So for students or art historians this book adds another dimension to the varieties of landscape and will surely add to their list of artists, and it has opened the door on an aspect of landscape not previously gathered together into one movement.

The National Gallery of Scotland produced its own paperback edition of the catalogue, which differs only in its cover and a few introductory ways.  The book was published in six languages.

An ‘alternative’ festival exhibition held in Edinburgh at the same time was very different.   It showed a cornucopia of items from Russia, which were related to Catherine the Great.   The excellently redesigned Chambers Street part of the Museum of Scotland houses the decorative arts (among many other things).   Although sizeable, and excellently installed, the exhibition could only show a tiny suggestion of the riches of the Hermitage collections, which benefited greatly from Catherine’s understanding of the importance of having the very best of everything from Europe and then promoting Russian production to add to this.  Coincidentally, several Scots were involved in her court, and this connection was explored under the title ‘The Thistle and the Eagle’.   Although the catalogue is not the subject of this review it might be useful to know that the essays and entries were written by Russian curators, and while informative and ample, contain some facts which are not nowadays always accepted as correct.  The illustrations are also difficult to relate to the catalogue entries, which were not numbered in the exhibition.