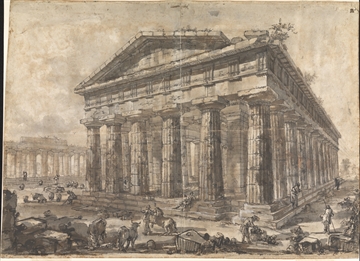 Towards the end of 1777 [Giovanni Battista] Piranesi made an arduous expedition to the remote malarial marshes in the Bay of Salerno …to record three majestic Greek Doric temples at Paestum.

This extract from John Wilton-Ely’s book Piranesi, Paestum and Soane sums up the foundation of the outstanding exhibition ‘Master Drawings Uncovered: Piranesi’s Paestum’ at Sir John Soane’s Museum, London (until 18 May 2013 in London, opening in Berlin on 1 June), where the majority of Piranesi’s remarkable Paestum drawings are on display.

Venetian-born Giovanni Battista Piranesi (1720–78), artist, architect, stage and interior designer, living in Rome from 1740, was much in demand for his topographical drawings, and architectural capriccio, fantasy drawings. His dramatic etchings for the series Vedute di Roma (151 ‘Views of Rome’, created between 1747–78), amassed a huge fan following and brought a wealth of ‘grand tourists’, artists and scholars to his showrooms in Rome – in Palazzo Tomati, near the top of the Spanish Steps – where he sold restored antiquities too.

Etching was a lucrative business for Piranesi and failing health did not stop him from venturing to Paestum in 1777, to create preparatory drawings for etchings of three Greek temples in the former colony of Poseidonia (or Paestum), founded by Greek settlers in 600BC.

In 1778 he returned to his home in Rome, to complete the drawings in the studio and to create the etchings. It was to be his last graphic project. With the help of his son, Francesco Piranesi (1758–1810), he created 21 plates, whicg were published posthumously in November 1778 in his book Différentes Vues de Pesto. Today 17 drawings survive. One is owned by the Rijksmuseum, Amsterdam, another by the Bibliothèque National; and 15 were purchased by architect Sir John Soane (1753–1837), at auction at Christies in March, 1817. In this exhibition they are united again for the first time.

Soane’s involvement began just as Piranesi’s life was ending. Correspondence reveals that in the summer of 1778 John Soane, then a young student of architecture travelling thorough Italy, met Piranesi at his showrooms in Rome. Soane presented Piranesi with a letter of introduction from Sir William Chambers (1723–96); the artist presented Soane with four views of Rome: The Pantheon, The Arch of Constantine, The Arch of Septimus and The Tomb of Cecilia Metella, from the Vedute di Roma series. From that meeting Piranesi and his drawings were to strongly influence Soane’s ideas on architectural design.

‘Master Drawings Uncovered: Piranesi’s Paestum’ explores how the Paestum drawings ‘revolutionised architects’ and artists’ understanding of early Greek Classical architecture’. It also examines the possibility that Piranesi’s prime reason for interest in the early Greek temples at Paestum was to prove that Roman architecture was not inferior to Greek. The debate was topical, particularly through the organized excavations of Herculaneum from 1738; and Pompeii from 1748, both ancient Roman towns relatively close, c.50miles in distance to Paestum, which had been rediscovered in 1746 during the construction of a new road. Its Doric temples were dedicated to Poseidon, Hera and Athena.

Piranesi was angered at the French Academy’s assertion that Greek architecture was more innovative than Roman. In his book Delle magnificenza ed architettura de'Romani, 1761, he argued that Romans had taken their architectural style not from the Greeks but from the Etruscans, early inhabitants of Italy. To confirm this, Soane’s own copy of Différentes Vues de Pesto – on display here, a vast, magnificent book – is open at the Frontispiece illustrated with a drawing of the Temple of Neptune (Poseidon), revealing Piranesi’s accompanying inscription that ‘Italian antiquities showed greater originality than those of Greece’.

Perhaps Piranesi’s argument is lost when one studies his large, impressive drawings. We are shown the temples as they stood when Piranesi saw them; overgrown, uncared for, with many columns broken, and sections lying on the ground. Amidst the ruins shepherds idly gather in small groups, whilst their animals graze. Piranesi plays with perspective and manipulates some views to heighten the sense of depth. One can see alterations to figures that his or another hand has made. In the exhibition each drawing has a copy of the finished plate displayed underneath, so that one can compare changes made in the final etching. Men, cattle, goats are moved, or removed from the originals, perhaps to balance the picture, but what stands out is the monumentality and majesty of the ancient temples.

Now, over 230 years later, in the peaceful atmosphere of Soane’s home in London, one has time to learn much about Piranesi and his drawings, about Soane and the inspiration for his architecture, and the development of architectural theory in 18th-century Europe. The accompanying book, by Wilton-Ely, Piranesi, Paestum & Soane, has been revamped from the 1980 original, with new scans, redesign and revised text, and excellent reproductions of Piranesi’s drawings in a repackaged publication that makes an excellent companion to the exhibition.

The best-preserved Greek temples in the world are not in Greece but at Paestum in  Italy, accessible by car and coach from Amalfi.