Salon art: Pandering to the tastes of the haute bourgeois 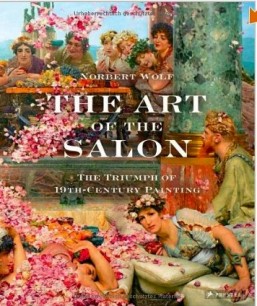 The Art of the Salon: The Triumph of Nineteenth-Century Painting

The term ‘ coffee-table book’  is a derogatory description, used about publishing in the way that ‘salon art’  is also used to dismiss academic art as trivial and outmoded. Happily, the coffee-table format is perfect for The Art of the Salon, a study of European and American salon art of the 19th century, which is in equal measure fascinating and appalling. The large format and generous illustrations do justice to these giant, highly detailed paintings. The book is unashamedly celebratory in presentation but the author, German academic Norbert Wolf, fairly presents the case against salon art, through the voices of past and current artists and critics. He discusses how these absurd, beguiling paintings could have been taken seriously and what they offer viewers today.

The term ‘ salon art’ was a term used by advanced artists to denigrate painters of an academic tendency. We can broadly define salon art as painting that takes as its subject historical and mythological events, presented in lavish detail and painted as realistically as possible. Wolf explains that salon art was a development from an earlier tradition of exhibiting new pictures by academicians annually or bi-annually. Salon presentations came increasingly to pander to the tastes of haute bourgeois gallery-goers and picture collectors. Paintings became ever more titillating, sensationalist and sensual, while ostensibly being didactic, moral works intended to educate the public. Though their names are hardly remembered now, the most successful salon artists became celebrated figures and immensely wealthy. Makart, Cabanel and Messonier were acclaimed as reincarnations of Raphael and Michelangelo but are now regarded (when they are regarded at all) as curious aberrations in the evolution as art.

Salon art swung between the polarities of moralizing parable and gratification as insubstantial as meringue. Wolf cautions us against dismissing whole groups of artists without looking at their work and attempting to understand their aims. He points out that many artists we think of as avant-garde (Delacroix, Manet, Courbet and so forth) not only had their roots (and livelihoods) in the salons, but saw no fundamental conflict between advanced art and the salon, though all came up against the limits of the salon’s conventions.

While this study is unfailingly informative, the translation is slightly florid (‘ enwrapped’, ‘Grecisizing’  and so forth). Academic stances are helpfully explained for non-specialist readers. British Victorian painters and Pre-Raphaelites are included alongside Continental salon painters, as their aims often coincided.

The section on Orientalism fairly duplicates excellent and comprehensive exhibitions mounted in London in 1984 and Brussels in 2010, which explored the multifaceted fascination the Near East held for European artists. Orientalist tableaux thrilled viewers with scenes of savagery and diverted them with fantasies of indolent and luxurious harems while allowing viewers to retain decorum by being separated temporally, geographically and culturally from what they were witnessing. The genre permitted Europeans a safe space in which to indulge licentious fantasies under the guise of being informed (and warned) about the barbaric and effeminate Orient. No genre allowed artists greater variety of opportunities to portray scenes of horror (the savagery of the Moors, the inhospitable deserts) and nudity (endless harems, bath houses and slave markets). Interestingly, Wolf states that many of the models for female Arab nudes were actually Jews, as propriety forbad male painters from seeing Muslim women undressed.

Thinking about these renowned artists with giant studios overseeing the creation and touring of sensational pictures, attended by hosts of models and pupils and entertained by high-society figures and royalty, one is irresistibly drawn to compare them to today’s film directors and theatrical impresarios. Looking at the historical paintings one is reminded of widescreen movie epics, while some of the single-figure paintings look like fashion shoots from glossy magazines. Salon painting never became extinct but mutated and its descendants can be found in today’s cinema, photography and video games.

Books such as The Art of the Salon are essential for art history students as they provide context and counterbalance the avant-garde line, which dominates our perspective. As it happens, convention is correct and the Goya-Géricault-Manet-Impressionist line is the most adventurous and exciting path, one that decisively influenced the art of the 20th century. Yet that can only be understood if we see what those artists were reacting against. Those who do not encounter academic art cannot truly understand the origins of Romanticism, Impressionism and the art that followed.

The Art of the Salon can be unreservedly recommended for anyone interested art of the past and the cinema and photography of today.

BUY The Art of the Salon FROM AMAZON