The Fry Gallery – the pearl of Essex 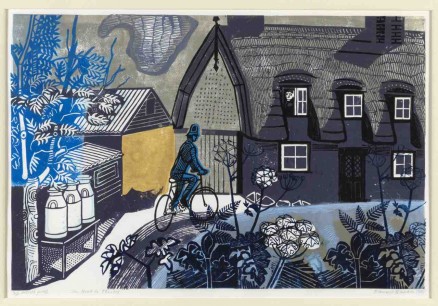 If the Fry Art Gallery, in the village of Saffron Walden, Essex, were a person, you could describe them as self-effacing, a touch shy, and definitely not the stuff of a self- publicist. ‘Fry, my friend,’ you’d like to say, ‘sound your trumpet more. You’ve so much to offer; people are always thrilled to meet you’. Fry, of course, would turn bright red. Indeed, even as we approach the Gallery’s entrance we feel as if we’re about to enter an unassuming Victorian family house. But appearances deceive. Never a house, the Fry was purpose-built in 1856 as a gallery by Francis Gibson, a local Quaker banker and amateur painter. He wanted to share with the public the pictures he’d been collecting.

There must be a dominant artistic gene in the family, for Gibson’s grandson, Lewis George Fry, was an established landscape painter whose paintings are featured in the collection, and another relative whose work enriches the Gallery was Roger Fry (1866–1934), distinguished art critic and painter, and member of the Bloomsbury group. He is credited with inspiring the Post-Impressionist movement in England as well as helping to establish the Omega Workshops and the Burlington Magazine. The contemporary artist Anthony Fry is also a relative.

In the 1970s, the trustees of the Fry estate closed the gallery and dispersed a large part of the collection of Old Masters. In 1985, they leased the building to the Fry Art Gallery Society, which renovated and reopened it in 1987 as  a gallery for art by established artists  with strong connections with the north-west Essex region. The collection (some 2,000 works by over 40 artists including those mentioned below) is mainly of works on canvas and paper – paintings, drawings, prints, and designs – but there are also textiles, sculpture and ceramics.

It was Edward Bawden  (1903–89) and Eric Ravilious (1903–42) who planted the seed of the collection when they happened upon the village of Great Bardfield, Essex, one weekend in the late 1920s while bicycling through the surrounding area, and stopping to sketch and paint. Such idyllic rural interludes gave these kindred spirits a release from the pressures of teaching at the Royal College of Art, design commission deadlines, and the fast pace of London city life. Both were at the outset of their enormously productive careers in industrial and fine art, encompassing such media as oil, watercolour, linocutting, lithography, wood engraving, wallpaper and fabric design, book, catalogue, poster and ceramic illustration. (Sadly, Ravilious was killed at the age of 39 while flying to Iceland as an official war artist.)

On their cycling weekend, Ravilious and Bawden found lodgings at Brick House, a Queen Anne construction on the High Street, once a fur factory and carriage maker’s. Charmed by the setting, they persuaded the owner to let half of it to them as a retreat.

In the eyes of the young men, the village was a rural heaven; most of the villagers earned their living from the land. Weekends away heightened their interest in the slowly disappearing crafts of rural England, such as basket making, brewing cider, pottery, thatching, cooperage (which includes making casks, barrels and buckets), and hedging, and the people who practised them.  They reflected this fascination in their work but without evoking the traditional or idealized, or replicating the ‘pretty’. Realities such as abandoned farm machinery, distorted perspectives and shapes, and birds and animals brimming with expression were part of their orientation, as were strokes of whimsy. Indeed, the allure of the rural was widespread among British artists in the 1920s, Samuel Palmer (1805–81)  being a great inspiration.

Eventually both men settled in the area.  Bawden married Charlotte Epton, a painter and potter. Ravilious married Tirzah Garwood, a painter, engraver and illustrator. Soon other artists, inspired by their friendships with the Bawden and Ravilious families, came to Great Bardfield and the surrounding area.

What also drew artists to the locality was its proximity to London. Most were teaching, exhibiting and working in the city in applied design. Property was also relatively inexpensive to rent or buy compared with other rural areas near the metropolis. Some of the newcomers corroborated on projects and encouraged each other to explore different artistic genres.

In time the burgeoning Great Bardfield artistic community included John Aldridge (one of the few oil painters amongst the group, notable for his landscapes and portraits). Of Aldridge the once Poet Laureate John Betjeman wrote:

His painting is consistent, impervious to fashion, and cheerfully representational. He belongs to an English tradition of local pastoral artists. He likes painting upturned earth, ploughed fields and mild landscapes. He is also the gardener’s artist. You can see that he is happy in every part of his garden…

Betjeman’s lines could, with provisos, have been written about many of the artists living in the area during the 1930s, ’40s and ’50s.

In 1942, Kenneth Rowntree moved with his wife, the architectural historian Diana Buckley, and their new baby to Great Bardfield. While his painting was initially quite representational, unlike many of his artist neighbours he later experimented with abstraction, using geometric forms and collage, informed by Cubism. Although a Quaker and Conscientious Objector, Rowntree was one of the artists commissioned by Kenneth Clarke’s War Artists Advisory Committee (WAAC) to make drawings and paintings of the British landscape and monuments, churches and other features of British life, the existence of which was threatened by development and a possible German invasion.

Michael Rothenstein, perhaps the most avant-garde of the artists in the community, especially in his printmaking (he was also a contributor to the WAAC), soon settled in the village at Ethel House with his wife, Duffy Ayers, a portrait painter. Rothenstein was the son of Sir William, a renowned painter and art critic, and brother of Sir John, then director of the Tate Gallery. Other Great Bardfield settlers included George Chapman, a painter and printmaker, whose work reflected the Welsh countryside and mining towns, and his first wife, Mary, and later his second wife, Katie, a painter, and Stanley Clifford-Smith, a painter and carpet designer. Also prominent in the group were Marianne Straub, a textile designer, and Audrey Cruddas (1912–79), a set and costume designer.

A younger generation of locals included Walter Hoyle, and his wife, Denise, Bernard Cheese, an oil painter and lithographer, and his wife, Sheila Robinson, an illustrator and etcher of notable imagination; she used cardboard instead of lino to produce images. Their daughter, Chloe, and the Bawden’s son, Richard, are successful painters and printmakers. The incredibly versatile Michael Ayrton also settled in the area. His accomplishments encompassed oil painting, sculpting, illustration, set design, and film direction. He was also a novelist and art critic. (Ayrton encouraged Keith Vaughan, a painter, textile and book jacket designer, to renovate a cottage nearby for weekends.)

In Saffron Walden, from the 1940s, Olga Lehmann, a painter, graphic and costume designer for theatre, film and television, was based. Her murals could be seen in American television series such as Dynasty. One of her neighbours was David Myerscough-Jones, a set designer acclaimed for his opera productions for the BBC. Olive Cook, a painter and writer who focused on art history and architecture and travel, and her husband, Edwin Smith, a painter, photographer and printmaker, came to reside there too in 1962.  Cook was instrumental in establishing the Fry.

In honour of the Coronation in 1953, the Great Bardfield artists held well-attended exhibitions of their work in their own or friends’ homes. People were attracted to the range of work and the idea of seeing how the creators lived. Sales were encouraging.  Further open days followed in the summers of 1954 and 1956.  Towards the end of the 1950s the Great Bardfield ‘community’ began to disperse although the wider North West Essex region continued to attract artistic settlers.

Undoubtedly the Great Bardfield artists and others in the locality shared a cultural landscape during the 1930s, ’40s and ’50s; their lives were interwoven. On the whole they were productive and industrious, applying their talents to an eclectic range of media. Most did not embrace the abstract, though in their later years, Rothenstein, Rowntree and Vaughan in particular adopted abstract approaches.  John Bolam (a Saffron Walden resident) certainly was an abstractionist. Much of the art produced here reflects a sense of the rural, or possibly the suburban, imbued with all of the foibles and rhythms of the every day.

The art I admire is not a vehicle for politics, social change, for venting angst; it is a means of communication with the outside world. No ‘isms’ or ‘ists’ could be applied to the entirety. Of national importance, unfailingly pleasing to the eye and the soul, the collection and its raison d’etre are incomparable. There’s so much to savour.

BUY Artists at the Fry FROM AMAZON

On view at The Fry: the permanent collection is exhibited in The Gibson Room (work is regularly rotated). Themed temporary exhibitions, featuring art in the collection and loans, are held in an adjoining hall. The most recent, an ‘Outbreak of Talent’, showcased work by Ravilious and Bawden and fellow students at the Royal College of Art, such as Barnett Freedman and Edward Burra, most whom were tutored by Paul Nash  at the Royal College of Art. Nash praised the group as ‘an outbreak of talent’. There’s a small library of books illustrated by artists at the Fry and areas displaying ceramics by Ravilious and work by Bawden, such as wallpaper designs. Recent acquisitions include a ceramic plate by Grayson Perry, who wrote in the visitors’ book: ‘The Fry Gallery is a concentrated burst of loveliness, a shrine to the art of my home county’.
For more information visit www.fryartgallery.org  Many books and catalogues are for sale. In the village there are places to eat, lavatories and parking areas.