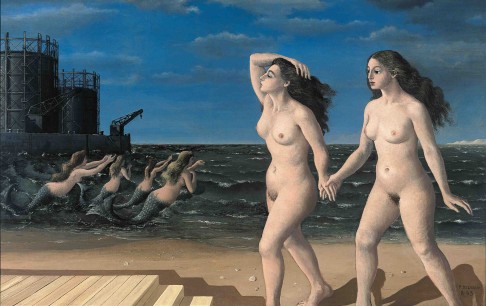 On show in London at the beautiful Blain / Di Donna gallery (until 17 July), a collection of 11 paintings and 10 watercolours by Paul Delvaux is the first-ever solo exhibition of the artist’s work in the United Kingdom. It is a rare opportunity to study some of his stunning works of art, the majority on loan from the Paul Delvaux Foundation, Belgium. Curated in collaboration with the Foundation, the collection was first shown in New York in June 2013 before travelling to London; it has been a long wish of gallery director Emmanuel Di Donna to hold this event.

The Belgian artist Paul Delvaux (1897–1994), was born in Anthiet, a small town near Liege, at the turn of the 19th century, when European cities, including Brussels, were indulging in the decadence of Art Nouveau in painting, architecture and design. In the arts field ‘isms’ dominated the avant garde: Symbolism, Post-Impressionism, Fauvism, Cubism, and Expressionism. What inspired Delvaux to paint? In 1916 he was enrolled at Académie Royale des Beaux-Arts in Brussels, in the architecture department, at his parents’ persuasion. (In Delvaux’s artworks architectural detail is ever- present.) A meeting with painter Franz Courtens during a family holiday changed his course to painting, re-enrolling for decorative painting.

The exhibition catalogue essay ‘Voyage à la Delvaux’, written by Anna Swinbourne, an independent art historian, formerly a curator of Painting and Sculpture at MoMA, gives insight into Delvaux’s childhood experiences; his education and introduction to art.  She cites Édouard Riou’s engravings in the illustrated edition of Jules Verne’s book A Voyage to the Centre of the Earth (1867), a gift to Delvaux in 1907 at his First Communion. Other fantasy travel stories, included Around the World in Eighty Days (1873), stimulated his imagination. At school he read Greek and Latin and was inspired by Homer’s The Iliad and The Odyssey.  He was interested in fantasy stories and epics, in travel and motorized vehicles: trains, trams and cars all inspired his work.

Swinbourne recalls Delvaux’s words, ‘I would like to create a fabulous painting in which I would live, in which I could live’, and his world on canvas was imaginative, surreal, empty, mysterious, silent. This world that Delvaux created is present in the selection of works on show at Blain/Di Donna.  The painting Le Sabbat, 1962, has an unearthly quality; it focuses on an outdoor candlelit gathering of naked women, all mute, with one man, fully clothed, facing himself in the mirror. What can it mean? Does Delvaux want us to find the secrets within his creations? Swinbourne states that this painting is ‘emblematic’ of Delvaux’s private world, most prominent in the depiction of women, ‘Delvaux’s female, in her full range of metamorphoses from lover to allegorical or mythological figure, radiantly reigns over the composition, outshining all else’. It is a powerful work, just one of the extraordinary painting laid before the spectator.

Included in the show are pre-war works such as the fabulous Les Nymphes se baignant, 1938; a personal favourite Le fenêtre, 1936, a masterpiece on loan from the Musée d’Ixelles in Belgium, and Femme à la rose, 1936; and the post-war Les femmes devant la mer, 1943, a homage to Picasso’s work; and the mystifying Deux femmes couchées, 1945, and L’éloge de la mélancolie, 1948. The 10 works on paper, all equally stunning include Nuits sans sourires, 1949 and Delvaux’s work of 30 years later, Murmures, 1979, another personal favourite.

This is a unique opportunity to see so many works by Paul Delvaux, in an exhibition dedicated to an extraordinary artist. The catalogue, bound in a rich purple suede cover, holds full-page reproductions of each work, and a chronology of the artist’s life; it is an open invitation for every reader to learn more about this enigmatic, talented man.

For more information about this exhibition see our Art News item, Cassone June 2013

Cassone will be publishing a full review of the catalogue this this exhibition in a future issue. The catalogue is available from Blain Di Donna.