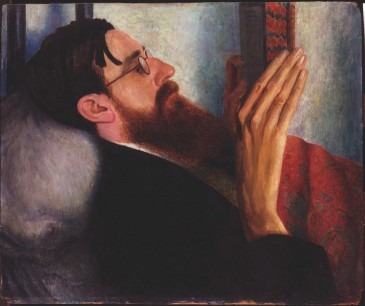 1910 had its own group of ‘young British artists’ breaking with the past. Sarah Lawson reports from Dulwich.

Bad luck if you were a student of only modest talent at the Slade School of Art in 1910, for your class would contain some of the best artists of the next half-century. And what rather mixed luck to be Henry Tonks and find your cohort of gifted drawing students going off and flirting with modernism, Cubism, Vorticism and whatever-next. They show great skill in life drawing (except for Paul Nash, who struggled with it), and the next thing you know they are exploring abstract patterns or Cubism.

These six richly talented Slade students were friends and colleagues and sometimes shared exhibitions, but they were never a recognizable school, since their styles differed considerably and they had little in common except the Slade (and poor baffled Tonks). Before his students left his tutelage, Tonks imbued them with an appreciation of early Renaissance painters, easily seen in some of the self-portraits here. Tonks called them the second Crisis of Brilliance, recycling a term he first used ten years before for the sparkling generation of the 1890s, which had included, among others, Augustus and Gwen John, Harold Gilman and Spencer Gore.

Now, at the Dulwich Picture Gallery until 22 September, you can see them developing from precocious teenagers to young artists coping with experiences during the First World War, to more mature artists going off on to their individual tangents. The pictures have been borrowed from the major London museums that you would expect, plus private collections and less expected galleries in Bournemouth, Barnsley, Swansea, Ottawa, and of course Cookham.

It is interesting to see how early some of the major themes appear. Paul Nash prefers to draw trees rather than the human form; Stanley Spencer finds parallels between his beloved Cookham and biblical events. His Slade friends even nicknamed him ‘Cookham’.  Spencer’s early (1910) Two Girls and a Beehive, painted when he was 18 or 19, shows two Cookham girls, the daughters of the local butcher, standing behind a black metal fence near a large brown beehive. In the background, behind another higher railing, is a ghostly figure with a shepherd’s crook. This is apparently Jesus, and Stanley Spencer later identified this picture as marking ‘my becoming conscious of the rich religious significance of the place I lived in’.

In those fertile pre-war years the group were young twenty-somethings not only feeling their way into adult life, but also very conscious of being young artists with all the excitement and alienation and emotional angst that goes with the territory. Mark Gertler told Dora Carrington, ‘A man should be a great artist, and a woman beautiful. I see nothing in between’. (Was this a wise remark to make to a young, ambitious woman artist? Are we surprised that their affair didn’t last long?)

Another painter who was slightly older than this generation of Slade students was John Currie. He might have been the seventh name in this very exhibition if he had not cut his career short by murdering his mistress and committing suicide in 1914. There is a fine picture of his on the wall, anyway, Some Later Primitives and Madame Tisceron (1912), showing a group portrait in an early Renaissance style. Madame Tisceron has been immortalized here as the proprietor of a Soho café that the artists frequented.

Into this artistic ferment and social uncertainty came the Great War.

These six spent the war in different ways, Nevinson joining the Friends’ Ambulance Unit and painting wounded men, Carrington painting her fine portrait of Lytton Strachey, Gertler concentrating on flowers for a while before producing his strange and disturbing Merry-Go Round, for which there are some studies in this exhibition. Paul Nash was at Dymchurch in Kent painting the waves crashing on the sea wall. David Bomberg was commissioned to paint an episode that happened in the spring of 1916 when Canadian sappers undermined a German position. Bomberg’s mystifying pre-war In the Hold decorates the cover of the catalogue. (When it was first exhibited in 1914 a critic thought it looked like a linoleum pattern.)

Back home from the Balkans, in 1919 Stanley Spencer finished his Travoys Arriving with Wounded at a Dressing Station at Smol, Mecedonia, September 1916 and two years later he produced a very characteristic picture with an angel-level perspective of the dedication of a war memorial in – where else? – Cookham. Unveiling a War Memorial at Cookham (1921), borrowed from a private collection, is seen in public for the first time in 25 years.

The shock of the Great War stayed with all the artists and changed their work for ever, and yet in some ways they inevitably continued with some of the themes and concerns they had been exploring in 1914. To emphasize the real people behind the pictures, there are display cases with their original letters, documents and photographs. Several rarely seen pictures are on display here. Besides Spencer’s Unveiling the War Memorial at Cookham, there is The Void, one of Paul Nash’s first oil paintings.

The catalogue that accompanies the exhibition is a splendid record of these artists and the progression of their early work. It provides a lively account of both the public reception of the pictures and the artists’ own remarks about them in their letters to each other and to their parents, friends, spouses, and patrons. Essays by David Boyd Haycock, Frances Spalding, and Alexandra Harris complement the texts accompanying the illustrations.

For me the startling thing about ‘A Crisis of Brilliance’ was how young these artists were when they began their careers. They knew in their teens that they had a gift and the pictures here prove it. It is interesting to walk through the six rooms and past the 70-odd pictures and see how quickly their individual styles develop. They came from different backgrounds, family circumstances, and parts of the country. They were thrown together at the Slade and formed friendships that would continue for the rest of their lives. They worked at their craft and followed their own divergent paths through life, but the Slade was both their incubator and their springboard.

BUY A Crisis of Brilliance FROM AMAZON

See Julian Freeman's article on Henry Tonks, teacher at the Slade and creator of an extraordinary record of early plastic surgical operations on mutilated First World War soldiers, in the Perspectives section of this month's issue of Cassone.