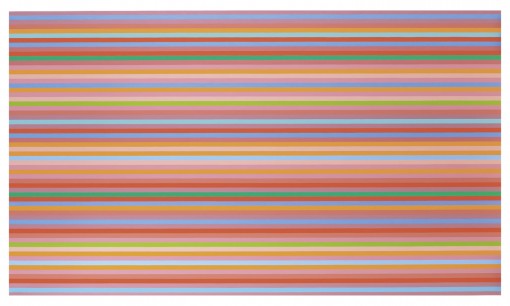 The stripe doesn’t wait, doesn't stand still. It is in perpetual motion (that’s why it has always fascinated artists: painters, photographers, filmmakers), animates all it touches, endlessly forges ahead, as though driven by the wind.  Michel Pastoureau, The Devil’s Cloth

The stripe has been used to decorate and adorn buildings and people for many, many centuries. It is both the simplest pattern – think of two colour-stripes of identical width found on many flags – and the most complex. Examples of the latter abound in the paintings created by Bridget Riley from the late 1960s into the 1980s. A selection of these works were exhibited earlier this year at the Galerie Max Hetzler, Berlin and a slim catalogue of generous page proportions, with text in German and English, was published to accompany the show.

There is little text, in fact. A short essay by John Elderfield does not discuss the stripe paintings per se, but deals more with Riley’s work’s relationship with the art of the past – Paul Cézanne, Georges Seurat, Paul Klee, Henri Matisse and Piet Mondrian are all artists whose work has been linked with hers many times – with notions of ‘nature’, and with how her work has changed over her career. He also notes the way in which the visual effects of her work engage the viewer, who:

Between this and the next essay are 17 pages of images, which start with the black and white Horizontal Vibration of 1961 (showing Riley’s interest in the stripe well before her main series of stripe paintings) and proceed through several paintings from the following decades – the most recent here being Lux (2011). These serve to show both the continuing fascination that the stripe holds for Riley and the inventiveness with which she has explored this motif over a prolonged period.

In the subsequent essay, Paul Moorhouse discusses the way in which the stripe paintings are constructed, how they generate their effects (both visual and emotional), and how Riley used them from the late 1960s to explore colour. Seurat used the dot of his pointillist paintings to juxtapose colours and produce retinal colour effects different from any colour actually on the canvas. Riley has used stripes, presenting the viewer with colours that are not ‘there’ on the canvas, but are just as real as any of her paint. Arguably, the stripe is better suited to this purpose than the dot. As Moorhouse says (in reference to Chant 2, 1967):

A regular, directional shape, it presents the longest possible potential for interaction with adjacent, similar forms…the colour stripe enables a subtle passage between chromatic events – from which a suffusing light slowly appears.

Riley’s engagement with the stripe deepened in the early 1980s, especially after a trip to Egypt inspired a new colour palette.  After 1985, however, her attention turned to other motifs but in 2009 she returned to the stripe, as if nothing else had quite its potential for effect and affect. While the paintings of the 1970s and ’80s were mostly vertical, the latest works are horizontal. Moorhouse suggests that in the earlier paintings there is a desire to avoid suggestions of landscape, whereas now Riley actively engages with that.

Moorhouse greatly admires the ‘wonderfully transparent tissue of fleeting sensation’ produced by works that for him constitute ‘an astonishing synthesis’ of all the pictorial principles that Riley has explored throughout her career. While reproductions can never replicate the effects of the original paintings, the large size and good colour printing of the illustrations here do give the reader some idea of what excites him so much in these paintings. The 25 pages of illustrations that follow his essay indicate the range of colour palettes that the artist has explored over the years, right up to 2012’s  Rose Gold, Rose Shadow and Rose Rise. The catalogue closes with some biographical notes and a chronology by Robert Kudielka.

At £28 for 86 pages the book may seem pricey, but the size and quality of the illustrations justify it. Bridget Riley: The Stripe Paintings 1961–2012 is a record of one artist’s prolonged engagement with a single motif, and of how much can be yielded by a motif through such engagement.