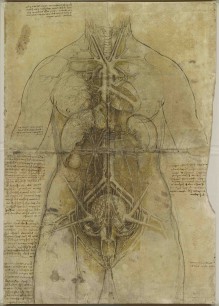 Nearly 500 years after Leonardo da Vinci’s death, his amazing studies of the human body are on show at The Queen’s Gallery, Palace of Holyroodhouse, Edinburgh.  They include a set of his finest sheets, collectively known as ‘Anatomical Manuscript A’, never before displayed in its entirety in the UK.

The really impressive aspect of the display is that his drawings are hanging alongside 21st-century medical imagery. But however much these modern techniques – such as MRI scans and 3D computer modelling – make for a superior understanding of anatomy, they can never rival the unconscious beauty of Leonardo’s delicate drawings. He crams his images onto the page, and writes in his distinctive mirror-writing between them, yet these drawings have a unity of composition which comes from being made by the single hand of a great artist.

Leonardo first started to study human anatomy in order to ensure accuracy in his paintings. He then developed an idea of producing an illustrated treatise on anatomy. He dissected over 30 corpses between 1507 and 1513, covering hundreds of pages with drawings and notes. He included the major organs, the bones and muscles – at the time a very original approach to studying the body. His experience in depicting architecture and engineering proved fundamental in showing how things fitted together. His depiction of the human spine is said to be its first accurate depiction in history: the fine detailing and shadowing is a marvel, and the modern computer modelling accompany it in the exhibition seems strangely lumpen despite its technical virtuosity.

Leonardo never looked and recorded once only, but observed many times over. His sheet of hands shows the layered structure, the result of a series of dissections, and he rotated his views around the body too. These varying drawings of repeated subjects emphasize his desire to learn as much as possible about everything he saw. His investigation of the heart included the making of a glass model to study the flow of blood; only in the 1980s did MRI scans prove that his description of the heart’s action had been almost entirely correct.

After Leonardo’s death in 1519 these drawings remained unpublished among his private papers. All his surviving anatomical studies came to England in the 17th century, bound into an album which has been in the Royal Collection since at least 1690.  By 1773 the physician and anatomist William Hunter had examined them in George III’s library. Hunter appears to have been the first person to appreciate their significance fully, writing of them that they had been done by ‘a genius of the first rate...who has been overlooked, because he was of another profession, and because he published nothing on the subject’. Even today, anatomists are still impressed by them. One of the advisers to the exhibition, Peter Abrahams, a professor of clinical anatomy, is quoted as saying that ‘In many ways Leonardo predicted the 20th-century revolution in various medical imaging techniques... The anatomical accuracy of Leonardo’s drawings has rarely ever been surpassed, and I still use them to teach surgeons and medical students today’.

Modern science is in evidence throughout: you can download the modern imagery on the website and there is an iPad App. This modern imagery is not present in the publication, however, which deals only with Leonardo and his own drawings. It includes superimposed anatomical analysis with modern labelling of body parts, and a glossary of terms used by Leonardo. But most interestingly, and most usefully, it shows Leonardo’s pages as repeated pairs of plates: each reproduction of an original manuscript page is followed by an identical reproduction of the drawings, but with Leonard’s textual notes transcribed into modern printed English.

At first glance, the essays and catalogue appear to be for the art-historical or anatomical specialist, but they are in fact written for the non-specialist – as I found out, for dipping into it again and again has proved absolutely fascinating.

'Leonardo da Vinci: The Mechanics of Man' is at the Queen's Gallery, Holyrood House, Edinburgh until 10 November 2013..

For more on Leonardo, see 'Leonardo's Milan brought to life at the National Gallery', Cassone, November 20122