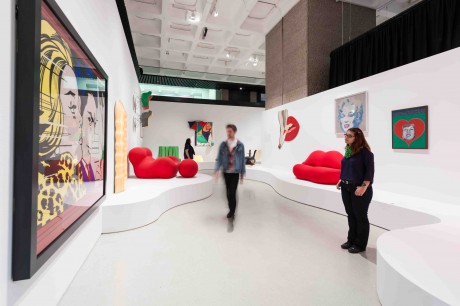 The snazzy exhibition ‘Pop Art Design’ atLondon’s Barbican Centre is just the antidote to a cold grey winter’s day. Spanning the late 1950s to the early 1970s, it features some 200 works, some rarely seen in public, by over 70 artists and designers. The big American Pop artists are well represented: Andy Warhol, Roy Lichtenstein  and Tom Wesselmann, along with Brits such as David Hockney,   Richard Hamilton   and Peter Blake.  Among the designers are the American’s Charles (1907–78) and Ray (1912–88) Eames who, along with Finland’s Eero Aarnio (b.1932), revolutionized design in the 50s and 60s with their moulded, space-age furniture, and the Italian maverick Ettore Sottsass (1917–2007), best known for his work for the manufacturers Olivetti and Alessi.

The show is sponsored by the Swiss furniture maker Vitra, itself part of the history of Pop design. Indeed, it still makes some of the designs shown in the exhibition, which draws extensively on the collection of the company’s own design museum in Germany. ‘Pop Art Design’ also features work from Denmark’s Louisiana Museum of Modern Art and the Moderna Museet in Stockholm. Pop is often seen as an essentially American phenomenon so the Nordic input is most welcome. It not only gives the visitor the opportunity to see lesser-known yet important figures such as the Danish artist and designer Gunnar Aagaard Andersen, but makes for a more inclusive and richer narrative. The show also flags-up the British contribution to Pop culture.

The exhibition’s premise is that there was an ‘intense dialogue’ between Pop art and design during the period and it is the first major show to examine this incredibly fruitful relationship. Yet it is also part of museums and collectors’ increasing concern with modern design as well as the seemingly inexhaustible nostalgia and commercially fuelled interest in the era. Indeed, ‘Pop Art Design’ follows two extensive Pop art sales held in late 2013 by the London auction houses Sotheby’s and Christies.

The Barbican show covers the emergence of an eclectic, ironic postmodern Pop aesthetic engendered by a burgeoning consumer society and mass media. It is very well laid out, juxtaposing Pop art, product design, fashion, architecture, interior design, textiles, film and graphic design, showing the migrations between them. It never feels cluttered or hard going and is a stimulating and enjoyable experience. In one section, one can lounge about on large beanbags and watch Chevrolet car ads and the sexy title sequence for the James Bond movie From Russia with Love. Admittedly, it is difficult to see the connection between some exhibits and design, as with Robert Frank’s downbeat documentary photographs of 1950s America.

According to the curators what marks out the period is the embracing of consumer culture by artists and designers alike and a fetishization of futuristic new technology and materials. Thermo-plastics, for instance, allowed designers to realize fantastic, playful designs. The French critic Roland Barthes (1915–80) saw the consumer society as the plastic-age with the material being both a prosaic and magical substance owing to its ubiquity and ability to be transformed into almost anything. Indeed, in the Barbican show the sleek new synthetics are emblematic of the era’s optimism and willingness to push boundaries. This is seen in Aagaard Andersen’s ‘excreted’ polyurethane armchair or the more mundane yet just as innovative Tupperware kitchenware from America, which heralded a change in domestic lifestyles.

The fetishization also extends to the female body and shows the blatant sexism of the period. Allen Jones’ provocative Chair sculpture from 1969 composed of life-size, fibreglass topless female figure on her back understandably enraged feminists. Yet in Pop design this led to a new corporally based aesthetic and sensuousness in relation to form and materials epitomized by Gaetano Pesce’s bulbous La Mamma/Donna armchair; a reaction to up-tight, old modernism with its clinical functionalism.  Although Pop was mainly a boy’s game, there are female artists and designers at the Barbican such as Jann Haworth and the Austrian Kiki Kogelnik. With Peter Blake, Haworth designed the cover for the Beatles’ Sgt Pepper album. Kogelnik’s colourful, plastic bomb-like sculpture fuses together cold war anxieties and consumerism.

The exhibition’s sumptuous softback catalogue Pop Art Design features essays by leading scholars covering a wide range of topics and is lavishly illustrated. Among them are graphic design guru Steven Heller on the links between Pop art and early American advertising, and an overview of Pop art by art historian Marco Livingstone, who argues that it still resonates strongly today in the concerns of much contemporary art. Diedrich Diederichsen, one of Germany’s most respected cultural commentators, discusses the rapport between Pop art and the visual culture of pop music, while design historian Dario Scodeller examines the assimilation and reworking of American goods and popular culture in Italian society, as with the cowboy film and Spaghetti western. The writing is erudite yet accessible and would appeal to anyone interested in the culture and history of the period.

‘Pop Art Design’ is at the Barbican Centre Art Gallery, London until 9 February 2014.

Peter Jones tells us that there is an easy-to-use app for the exhibition, downloadable from the Barbican website.   It features images of works, commentaries by the curators and interviews with artists and designers. The gallery shop has a range of appropriately funky merchandise including Pop-inspired contemporary design and iconic pieces from the period, such as the ‘love it or hate it’ lava lamp!