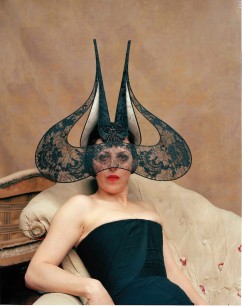 Isabella Blow was a formative influence on the careers of some top British fashion designers, as a major show devoted to her celebrates

The late Isabella Blow ‘could talk about fashion with complete rigour in terms of silhouette, shape and historical context. She was an academic with a punk rocker’s anarchic sense’ (Geordie Greig, Blow’s editor at Tatler magazine).

Isabella Delves Broughton (Blow was her second husband’s surname) was born into an impoverished aristocratic English family in 1958. Her father was a baronet whose own father, Jock Delves Broughton, had been a profligate spendthrift. Jock had run through the family fortune and been accused (though cleared for lack of evidence) of murdering the Earl of Errol in the Kenyan ‘White Mischief’ scandal of 1941. Jock’s first wife, Isabella’s grandmother Lady Vera Delves Broughton, had been an adventuress who held the world record for landing the largest recorded tuna. Her photographs of Papua New Guinea were to fascinate the young Isabella.

As the family had no money, Isabella grew up knowing she would have to earn a living. After studying art history she became a fashion stylist and editor, working variously for Vogue, Tatler, the Sunday Times Style magazine and other publications. In this milieu she met many upcoming young designers, often singling them out at their graduation shows. She promoted them, including Hussein Charlayan and Julien Macdonald, by wearing their designs at prestigious events, covering their work in her publications, styling their fashion shows and giving business advice. Hat designer Philip Treacy worked for some time in a room in her flat.

Blow launched the careers of young British fashion designers such as Alexander McQueen and Philip Treacy. An exhibition at London’s Somerset House is currently exploring her work and covers the whole of her career. It is an extensive show, and although the first rooms are not well laid out this improves as one goes through. The main problem in the early part of the show is the number of very small television screens at low level, showing footage of fashion shows in which Blow had a hand. People stop to look at these for long periods, blocking the way through to other exhibits. Note to curators everywhere: please don’t do this!

One of the first exhibits is a 2002 sculpture by Tim Noble and Sue Webster constructed of a stuffed woodcock, part of a Manolo Blahnik shoe, a lipstick and other items that all together look like one of Blow’s wilder hats. It is, in fact, a profile portrait of Blow, which can be seen as a shadow on the wall behind.

Magazine spreads show interiors as well as fashion shoots styled by Blow. One shows her modelling a Philip Treacy hat: she met him in 1989 when he was still a student at the Royal College of Art. He made her headdress for her wedding to Detmar Blow the same year. Blow was indeed famous for her hats, many of which covered or partly covered her face – a defence against ‘social kissing’, which she hated. Some must have obscured her vision to a dangerous extent.

Blow helped arrange and promote Alexander McQueen’s ‘Dante’ show in 1996 in London’s Spitalfields and Treacy’s show at the Natural History Museum that year. ‘Dante’ was conceived by McQueen as a tribute to her, and she was instrumental in his and Treacy’s achieving international reputations within 10 years of graduating. Some of the ‘Dante’ clothes are shown here: beautiful and inventive, though some are strictly catwalk-only. The ‘Mr Pearl’ corset, for instance’ would require the wearer to keep her chin very high indeed as the front of the garment extends upwards in front of the neck.

Hats from a Treacy show sponsored by Rolls Royce feature aerodynamic designs. One carries the RR flying lady and extends so far below the eyes that it could surely never be worn in normal life. There again, did Blow actually ever have a normal life? Much of what is shown here suggests not. A red velvet creation allows vision through one eye while another resembles a Venetian mask, with holes cut for the eyes. Some hats feature conventional shapes elegantly distorted in one or more directions, while others look nothing like one’s expectations of a hat.

She was fascinated by the Middle Ages and so the curators have styled some items with pieces of real armour. Blow saw clothing as a form of protection from everyday life. One Treacy hat has an entire model castle on top, extending upwards for at least half a metre and terminating in a single delicate spire. Many of her own clothes, complete with cigarette burns and tears – Blow does not seem to have been overly careful of them – actually look very wearable. Shapes are often simple, though in beautiful fabrics and lavishly embellished with embroidery and beading.

One room features large monochrome prints of photoshoots of models whose careers were started or boosted by Blow: Stella Tenant, Honor Fraser and Sophie Dahl among them. The photos were shot for a piece called ‘Anglo-Saxon attitudes’ styled by Blow. The models in their glamorous clothes are shown against rather seedy-looking streets – a new idea at the time.

Sadly, in 2007, suffering from depression exacerbated by the knowledge that she had cancer, and feeling that she was losing her influence in the fashion world, Isabella Blow committed suicide. She would no doubt have been pleased to see her role so exuberantly recognized and celebrated as it is at this exhibition.

A hardback book, Isabella Blow: Fashion Galore by Alistair O'Neili and Nick Knight, has been produced to accompany the exhibition, published by Rizzoli International, ISBN 978-0847841721