From vampires and zombies to werewolves and ghouls 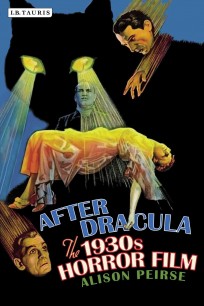 Undead but forgotten? Alison Peirse’s book uncovers a neglected collection of US and European horror films

After Dracula: The 1930s Horror Film by Alison Peirse

Alison Peirse takes a new and innovative approach to film research in After Dracula.  Her book examines a diverse collection of horror films as a specific cycle of production during the 1930s.  She suggests that other, original and innovative, horror films produced in the US and Europe have been overlooked because of the success of Universal Studio's Dracula film.

After Dracula brings together a varied yet related collection of horror films produced between 1930 and 1936, when censorship affected the studio output of such films; and presents a coherent, balanced, thoroughly researched and referenced argument about their relationship with each other.  Beginning with vampirism inDracula and including horror locations such as Ancient Egypt, Yorkshire coal mines and Hungarian modernist houses, Peirse weaves together a discussion surrounding this cycle of films and the key themes and images they share.  Her argument differs from a genre-based approach, which tends to identify a repetition of these themes and suggests that a diverse set of elements are common between these films.

After Dracula examines a number of films that have been marginalized and overlooked by film researchers owing to the success of Dracula, Frankenstein and the sequels that followed.  Films such as Island of Lost Souls, White Zombie and The Ghoul were produced by mainstream and independent studios in America and Europe during the early 1930s.  The book does not propose a grand theory of genre that can be applied to these overlooked horror films, instead it proposes a more diverse empirically grounded methodology.   Peirse’s work is based on new archival research as well as observing, experiencing and verifying this particular set of films. Her findings link the often eclectic range of horror movies produced around this time.

The opening chapters examine the primary idea that other films have been forgotten owing to the initial success and continued popularity of Dracula.  Peirse suggests that ideas about memory, remembrance and death link together many of the horror films produced around this time.  She suggests that the use of flashback sequences employed in the Universal horror film The Mummy may help the viewer remember the previous horror film Dracula. This may be stretching the idea too far but the cycle of horror films that Peirse has identified do make reference to each other.   For example, viewers may see the link between the modernist home of Boris Karloff's character Poelzig in The Black Cat (1934) and the home of Baron Frankenstein in the original Frankenstein film and yet again in the more modernist set designs in subsequent Frankenstein sequels.

Another action of remembrance is played out in The Mummy.  When the character Helen, played by Zita Johann, is mesmerized by the stare of the re-animated Mummy, the viewer is reminded of a similar scene in Dracula.  In that film the character Mina, played by Helen Chandler, is also mesmerized by the vampire who is visiting her house under the guise of an European aristocrat.  The personalities of both Dracula and the Mummy can be associated with death.  The act of recall is aided by the fact that both films feature actors playing very similar parts: in both films the fiancé is played by David Manners and the doctor in each film is played by the character actor Edward Van Sloan.

The second aim of the book is to present an account of previously overlooked European horror films, particularly the British horror series including The Ghoul, The Clairvoyant and The Man Who Changed His Mind.  Several British horror films were produced by the Gaumont-British film studio under the direction of Michael Balcon, who went on to be the head of Ealing Studios.  These British horror films often featured a US star such as Fay Wray, or a star who was well known on both sides of the Atlantic, such as Claude Raines or Boris Karloff.  Although such films were aimed primarily at the UK market (with its recently introduced British Board of Film Classification H for horror certificate) they were a direct response to the success and influence of Universal's Dracula.

After Dracula has three strongpoints. Firstly, it identifies the fact that other films have been ignored owing to the success of a few classic horror films.  Secondly, it presents an account of those forgotten films.  Thirdly, it challenges the notion that genre can be defined by a few original films.  It opens up the idea that films can be seen as a cycle, evolving from and making reference to previous films.  By taking this approach we can understand that werewolf films did not necessarily start with The Wolfman (1942) but can look back to Werewolf of London (1935) as the genesis or origin of the cycle of werewolf films.

BUY After Dracula FROM AMAZON