Bruges – a capital city for art 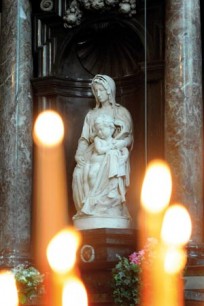 The chance of a three and a half-day trip to Bruges, capital of West Flanders in Belgium, a short journey from London, meant a visit to the World Heritage city, to walk around the historic centre, see the canals that snake through its centre, visit some of the churches, museums and galleries, and the city hall plus a climb up 366-steps to the top of the 14th-century Belfort Tower (dramatic centre-piece finale of the film In Bruges). There were more optional choices too, to learn about chocolate making – Bruges has more than 50 chocolatiers – and brewing beer, two of the city's industries alongside lace making.

Museums and galleries are closed on Mondays, so the day was spent on a walking tour of the city from the Markt, its central square, to as far as the Beguinage, a complex of houses and a church in tree-lined peaceful grounds, founded in the 13th century as a safe house for widows and their families. It is a convent now and one is allowed to walk through if silence is maintained (birds were singing vehemently, oblivious to notices). Throughout the centre the narrow, busy streets are full of small cafes and restaurants.  Chocolate shops and lace shops are everywhere but interspersed, particularly on the side streets are boutique shops for fashion, art, musical instruments, and antiquarian bookshops. I visited the Stadhuis (city hall), dating from 1376, Bruges seat of government for the last 600 years. Inside is the Gothic Hall highly decorated with 19th-century murals. Nearby the Brugse Vrije, the Courts of Justice from 1795–1984, are open for visitors. (Purchase of a 3-day museum pass, from the city hall, tourist offices or any gallery, costs 20 euros for entry to 16 museums and galleries, and includes the Stadhuis and Bruges Vrije.)

For an art historian a must-see on the ‘list’ included viewing Michelangelo's sculpture Madonna and Child (known as the Bruges Madonna), 1501–4, in Onze-Lieve-Vrouwekirk (Church of Our Lady). For me the Baroque altarpiece overwhelmed the statue at its centre. It is behind glass but it was enough to concentrate on the beauty of the mother and child’s faces. During my visit in September the church was undergoing restoration. It was possible to see the Michelangelo work but statues in the side chapels were covered in white shrouds. The church is now closed but re-opens at the end of November.

After lunch on Monday I walked to the east of the city centre to visit the Jerusalem church, built in the 15th century, to the ground plan of the Holy Sepulchre in Jerusalem. Within its grounds is a Lace School; I watched lace being made by hand by a group of ladies. Nearby, at the end of the street my final stop was the Folklore Museum, housed in eight former 17th-century single-dwelling almshouses, restored to display the story of Bruges’ in the 19th century. Each room had a different scenario, from the schoolroom to the cobblers, chemist, tailors, and grocer’s shop, and more.

On Tuesday, with galleries open, my list of places to visit was long but by now I knew my way around – the historic centre is easy to walk around – and had planned it out. After an early morning 30-minute canal boat ride (I could not visit the ‘Venice of the North’ without going on a boat), I disembarked opposite the Groeninge museum, just as it opened. Set in beautiful grounds, the gallery holds an unsurpassed collection of ‘Flemish Primitives’. Room 1 set the magic, a vast diptych by Gerard David, Judgement of Cambysses (1498); the gruesome detail of the flaying alive of Sisamnes will stay with me. Room upon room is filled with unique works, closing with Marcel Broodthaers (1924–76). I loved the humour of his work Les animeaux de la ferme, 1974. Next door to Groeninge is the Arenthuis, which holds a collection of works by British artist Frank Brangwyn (1874–1956, born in Bruges) in six rooms on the upper floor. These paintings were given to the city by the artist in 1936.

Not far away St John’s Hospital, on site for around 800 years, was a hospital for the poor and a rest-stop for travellers and pilgrims. It was still in use well into the 20th century. Within its walls a history of the hospital is laid out in the vast room that held the hospital beds under a canopied wooden roof. Around the walls are paintings, books, documents, records of the hospital's life and its doctors, sisters, and patients. Surgeons' instruments with handbooks of diagrams for their use is not for the squeamish. This is an appetiser to the museum’s treasures of Hans Memling paintings, worth a visit even if you just go to the city for a day. No reproduction in an art book can capture the experience of seeing them in person, especially ‘St Ursula’s Reliquary’, the gold leaf offsetting the panel paintings depicting the story of the martyrdom of St Ursula. The work was commissioned in 1489 and was only displayed on the feast day of St Ursula on 21 October. It is now on permanent display.

What I liked so much about Bruges, apart from its beauty and art collections, was the opportunity to try so many good cafes and restaurants. On my final morning, before heading for the chocolate shops, I walked up the 366 steps of the Belfort Tower in Markt square. On reaching the top stunning views of the city and beyond stretched out. Below one could see the bright tarpaulins of market stalls, selling meats, bulbs, fruit, cheeses, perfect to buy for the journey home.

See our Amazon links for a selection of books on Bruges and the Northern Renaissance. The city of Bruges was the setting for the film mentioned by Rosalind Ormiston, In Bruges.