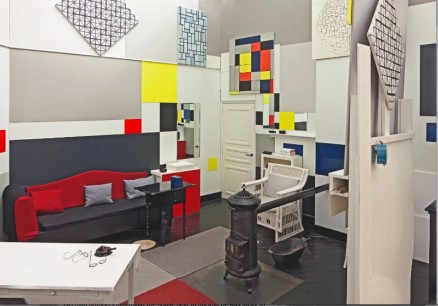 Mondrian was ‘a pioneer who lived his art as well as promoting it as a universal ideal’ says Alexander Adams, who reports on the current Mondrian exhibition in Liverpool.

For the few who followed abstract art in the inter-war period, most knew of Piet Mondrian (1872–1944) via articles illustrated by photographs of the artist’s studio, perhaps accompanied by a small black-and-white reproduction of his geometric compositions. Mondrian was considered a theorist, but also a pioneer who lived his art as well as promoting it as a universal ideal.

During his career, Mondrian occupied 14 studios, some for only brief periods. He was never financially well off, so suffered the vicissitudes of being an itinerant tenant rather than a property owner. The current exhibition ‘Mondrian and his Studios’ (Tate Liverpool, closes 5 October 2014) examines the role of his studios in the creation and reception of the art, including a recreation of his most famous studio in Paris, 26 rue du Départ.

Mondrian began as a landscape painter in his native Netherlands. The early paintings are typical of Dutch Realist painting of the time – small views of unremarkable subjects painted in heavy brushwork and muddy palette. Contact with advanced painting broadened his palette and brought him into contact with spiritual ideas. (This early work is currently on display in a separate exhibition in Margate.) The work in Liverpool represents a selection of his mature style: abstractions of churches and trees, oval compositions with lines, geometric blocks and grids and his signature plane-and-lattice abstractions. By 1920 his mature style was established: black bars and rectilinear planes of primary blue, yellow and red, with white. Within a seemingly fixed formula, Mondrian was constantly honing ideas. He used lines of variable thickness and square canvases hung diagonally. In his last years, he experimented with multi-colour bars, as seen inBroadway Boogie-Woogie (1942–3).

In Liverpool there are representative examples of most of Mondrian’s approaches to creating slightly unstable visual equilibriums. Compositie [sic]No. 5 with Colour Planes 5 (1917) is an example of the early abstract work, where Mondrian worked with non-primary colours such as yellow ochre, pink, grey, aqua and off-white. The close optical intensities of the ochre and pink has the extraordinary effect of becoming unstable as the viewer’s eye moves, making the blocks seem to waver slightly as the gaze moves. There is an unfinished painting with semi-erased charcoal lines showing how Mondrian adjusted designs. He also used coloured paper.

Mondrian painted studio walls off-white and fixed coloured rectangles of cardboard. The furniture that he made was wooden, painted and unornamented. Thus, with this white ground, planes of colour and black rectilinear objects, Mondrian could turn his studio into a living painting or – as Le Corbusier might have put it – a painting for living. The studio became a place for experimentation with space and colour and the paintings were an extension of that environment. This modus vivendi continued through the rest of Mondrian’s life.

Curator Michael White notes that visitors were never able to describe exactly the dimensions and layout of Mondrian’s room at rue du Départ, owing to its peculiar five-sided plan and Mondrian’s spatially disorientating interventions. The conjunction of two buildings had led to the construction of this architecturally anomalous space, which the artist occupied from 1926 until the compulsory purchase of the building in 1936 for demolition. Following the discovery of architectural blueprints, a full-size reconstruction has been assembled. Visitors can enter the space, which is furnished with replica furniture and (reproduction) paintings on the walls.

Once one has been introduced to the idea of Mondrian’s studio as a reflection of his painting aesthetic, and vice versa, one starts to see supporting evidence in the art. In many of the paintings, the planes of colour abut the edge of the canvas and imply some existence outside the edge of the painting. The diagonally orientated canvases with horizontal and vertical axes in the design have a clear feeling of being incomplete views of semi-Platonic ideals. Lozenge Composition with Four Yellow Lines (1933) implies an incomplete view of a complete square with the corners cut off, yet scrutiny reveals the lines are of varying width with introduces an element of uncertainty. The painter is playing with the human tendency to seek regularity in data even when that data are actually slightly different from the ideal the mind imposes.

Some of these ideas are ably discussed in the catalogue. The best way to appreciate the exhibition is to read the catalogue before visiting. The writers and curators wisely refrain from pushing the idea of Mondrian’s art as being an example of installation or interactive art, which it certainly was not. The artist made very sure that he controlled the viewing experience and considered his paintings as discrete, independent units.

Mondrian was included in the Nazi anti-Modernist art exhibition ‘Entartete Kunst’ (‘Degenerate Art’),   in 1937, and knew his work and safety were in jeopardy. Alarmed by the prospect of war, Mondrian moved from Paris to London in 1938. Mondrian’s studio in Hampstead, London (60 Parkhill Road) was not photographed, probably because the artist stayed there only briefly (1938–40). He never felt at home or secure there; during the Blitz, German bombers destroyed the house next to his and he was lucky to escape serious injury or death. Mondrian only considered London a staging post on the route to America. In 1940 Mondrian arrived in New York and remained there for the remainder of his life. The exhibition includes a colour film of Mondrian’s Manhattan studio after his death and some of the colour rectangles that were on the walls.

The exhibition is not large and the rest of the top floor of Tate Liverpool is occupied by a display of drawings and photographs by Indian artist Nasreen Mohamedi (1937–1990). She was an artist who drew geometric designs with ink on paper, with marks in sequences, patterns and groups. Her photographs of urban scenes and natural phenomena display a keen eye for design. The choice of her to accompany Mondrian is intelligent and the two bodies of work complement each other.

SEE details of the catalogue on AMAZON

For more on Mondrian see 'Inventing and reinventing the early years of abstraction at MoMA' in Cassone, April 2013

‘Mondrian and his Studios’ is at Tate Liverpool until 5 October