More than an actor: The photography of Dennis Hopper 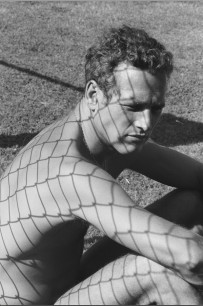 I pulled into Nazareth, was feelin’ about half past dead /

There are few experiences in the canon of American music so capable of inducing misty-eyed nostalgia in men and women of a certain age. The Band’s The Weight is indelibly impressed into the experience of viewing and reviewing Easy Rider (1969), and is merely one part of the extraordinary composite that is ‘Dennis Hopper: The Lost Album’ (London, Royal Academy of Arts, until 19 October 2014). If you haven’t yet seen it, make the effort. It provides core material for anyone interested in film, photography, American art, society and history, and consists of just over 400 small format black and white photographs of approximately 6 x 9 ins made by Hopper (1936–2010) between 1961 and 1967.

At that time, photography was Hopper’s sole creative activity: his single-minded pursuit of the medium dwindled after 1967, when he began to devote himself to acting and film direction. In 1970, however, Hopper selected 429 exhibition prints for his first major solo exhibition at the Fort Worth Museum. These were set aside afterwards, and forgotten, to await re-discovery after his death, and this RA show comes very close to a replica. Where prints from Fort Worth have been lost, blanks are shown, but to all intents and purposes the arrangement is Hopper’s own.

What makes a great exhibition? In this case, almost everything, starting with the space itself. When the impact of so many blockbusters can be undercut by curatorial shoe-horning, the long, 1960s pale pastel walls and empty floors of the RA’s Burlington Gardens rooms enable this show to unfold very much as photographic records show it in situ at Fort Worth. Visitors have to hit the ground running: the small size of the images, their three-up arrangement, and Hopper’s range of subjects compel and gain immediate interest and respect. There are no other overtures, save some of his own short statements, enlarged on those gallery walls not occupied by photos.

Hopper’s self-image as an artist was multi-layered: he captured what he saw and felt was expressive, but was also content to position himself in the wake of Duchamp. To paraphrase, ‘if I say it’s art, then it is’. He also saw himself as an expressionist and was most at home with artists of every hue. He wanted to make statements, to document, and for those documents to have their own voice. All present do that and more, served by an impressive understanding and awareness of pictorial space, capable of shifting from intimate close-ups of friends and acquaintances to greater depth of field with ease.  Combine Hopper’s photographs of billboards and their factories with others of the large areas of Pop and abstract painting (and close-ups of their authors), and with still other images of textural surfaces in the show’s final room, whose overall area is not disclosed, and all manner of conjecture is possible concerning his awareness and use of pictorial and other space.

‘The Lost Album’ is described severally and accurately by its curators and presenters as an over-view of a period of great change in America during the mid-20th century. To move through this exhibition is to be accepting of a series of personal but highly informed responses to art, sexuality, filmmaking, racial and civil unease, and to sub-cultural activities and groupings. Hopper’s images of hippie ‘happenings’, and Hell’s Angels are contrary examples of his natural ability to interact with his subjects and to capture meaningful, yet unposed, outcomes. The same is true of most of the other human records in the exhibition, and the majority of images fall into this overall category. Hopper’s photos of Pop artists dating from the early 1960s are ‘of’ the era: his quartet of Warhol, Hockney, Geldzahler and Goodman (1963) is as good as they get, but there are others. Vignettes of Ed Kienholz, Ed Ruscha (both personal friends), Jean Tinguely, Alan Kaprow, Peter Blake, John Kasmin, James Rosenquist, Roy Lichtenstein and Jasper Johns are magnetic not solely for the excellence of their execution, but also for their existence in Hopper’s world: these are some of the people to whom he gravitated naturally, and their apparently effortless capture is beguiling.

Hopper joined the famous Civil Rights ‘March on Alabama’ in 1965, and the images he accumulated from this polygonal experience are many and varied. The appearance of the Stars and Stripes borne by black and white marchers is a knowing, jarring vision of this period, and Hopper knew it also. Some have suggested that his work in Alabama connects him with Dorothea Lange and Gordon Parks, but in the context of this collection, comparisons – Capa, Cartier Bresson, Vishniac – ultimately serve only as touchstones: the work is the work, and one of its collective strengths is its ability to deny exactly that type of knowing response.

Almost at the exhibition’s close, the RA have designated an area for scheduled screenings of Easy Rider and The Last Movie, but the Easy Rider excerpt in which Fonda, Askew and Hopper ride into the twilight towards Monument Valley is played on a loop. The screened image is billboard size, and its closing landscape panorama is as big as any abstract expressionist canvas; its three occupants are mere midgets, visually, and in their aspirations also. Others have suggested that ‘The Lost Album’ might easily be seen as a sketchbook for Hopper’s future relationship with the movies, and if one already knows Easy Rider, that notion is easily acceptable without recourse to any preparatory reading, but there is so much more here. You put the load right on me