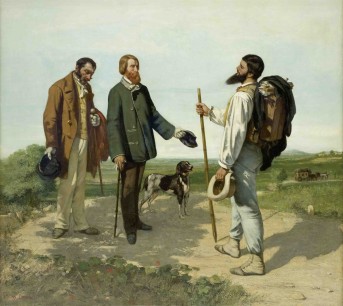 As the Fondation Bayeler holds a Courbet exhibition, the catalogue reveals some new perspectives on the artist’s work – but does it go far enough?

Gustave Courbet (1819–77) is best known as the leading exponent of realism in French painting. Initially a Romantic in outlook, Courbet pioneered a manner of making history paintings which incorporated the drama and excitement of Romanticism in portrayals of everyday life of rural people. His Burial at Ornans (1849–50; set in his hometown in Eastern France) and The Stone Breakers (1849) upset conventions by showing the harshness of life for peasants, at a time when the bourgeois expected to encounter the sentimental and moral images of Millet’s pious, contented country people.

Courbet courted attention with his dramatic subjects and vigorous painting technique – he was the first artist to routinely apply paint with a palette knife. The artist had socialist sympathies and his political involvement precipitated his ending his days exiled in Switzerland.

Hatje Cantz has published two books on the art of Gustave Courbet to mark an exhibition of his art at Fondation Beyeler, Basel (closes  18 January 2015). One is a conventional exhibition catalogue documenting the exhibits; the other is a small-format volume containing personal reflections and historical perspectives on Courbet.

The hardback catalogue for the exhibition divides the images by theme (marines, landscapes, snow scenes, nudes, self-portraits, and so on) and reproduces them at large size. There are essays on different topics not always related to the groups. Michel Hilaire explains how the patronage of Alfred Bruyas freed Courbet of the necessity of painting for the annual Paris salon. It is Bruyas and his servant who are shown greeting the artist in Courbet’s painting Bonjour, Monsieur Courbet (1854). James H. Rubin examines the connection between positivist materialist philosophy and Courbet’s aesthetic. Ulf Küster discusses the analogy between Courbet’s many paintings of mysterious, watery grottoes and the female nudes, who were traditionally depicted as La Source, a woman as bringer forth of the water of life. The grotto-as-woman analogy was first advanced by Feminist art historian Linda Nochlin. These grottoes and springs form a thematic innovation in landscape painting. The ‘landscape close-up’ was a rarity before Courbet began to paint them.

There is an essay discussing discoveries made about Les Trois Baigneuses (c. 1865–8). This painting shows a woman being lowered by two companions into (Courbet’s typically black) water. The slightly strange postures of the figures (especially the central one) have been explained by the discovery that the vertical format was originally horizontal and that the main figure had at first been a lone reclining nude. X-rays and infrared photography reveal that the painting was expanded and extra figures were added once Courbet reconceived and reoriented the scene. The essay by Bruno Mottin explains the scientific investigation, illustrated with technical photographs and paintings of reclining bathers by Courbet.

A section is devoted to L’Origine du Monde (1866), an infamous depiction of a woman’s bared torso and exposed genitals. The painting’s meaning and the artist’s intentions are unclear and much debated. The discovery in 2013 of what is claimed to be a missing part of the painting (mentioned here only in a dismissive aside) would have provided a chance to expand this debate. This new painting shows a woman’s head reclining and if it were proved to be another part of the same painting, it would alter the way we consider L’Origine.

Hitherto the assumption had been that Courbet had overturned convention by depicting the human form in fragmentary fashion, which had previously been used only for preparatory studies not as finished works of art. Not only had he innovated the anatomical close-up, he had accomplished it in a way that was provocatively sexual. The discovery of other fragments, suggesting that L’Origine was in fact a detail of a whole- (or half-) body depiction, shakes that reading. This development (if authenticated) would make Courbet a more traditional and less iconoclastic artist; on the other hand, the idea of Courbet – for whatever reason – dismembering a painting then, perhaps with a degree of sardonic amusement, selling off the most provocative part and passing it off as an independent work of art, presents Courbet as a brilliant provocateur and opportunist.

What are we to think of this situation? Our answer to that goes to the heart of how we view the importance of the artist’s intention. Was the fragmentary nature of the painting intentional on Courbet’s part? Did Courbet accord the fragment the same status and weight as a ‘complete’ painting? Does it matter what Courbet thought? These questions get the heart of how we see art in relation to the artist and the essay writer misses an opportunity to shed new light on this matter.

The separate collection of Ulf Küster’s ideas and reflections on Courbet incorporates personal memoir and art historical analysis. The text overlaps only a little with that in the catalogue. A small-format paperback with some illustrations, it throws an interesting sidelight on Courbet and does not aim to give an overview of the painter’s life and output as a whole. The binding feels a little flimsy.

The exhibition catalogue has one serious failing which cannot go unaddressed. Many of the landscape format paintings are printed on pages over the book gutter. This has been done to make the reproductions larger but doing so has rendered the images partly unreadable. Is a reader expected to break the spine to flatten the pages so he or she can reduce the gutter shadow? The only way to show images wider than a single page is to use fold-outs. Hatje Cantz, a publisher with usually impeccable standards, has made an error in the design of the hardback Gustave Courbet.

The exhibition at Fondation Bayeler, Basel, Switzerland runs until 18 January.The hardback catalogue is available from  Hatje Cantz - For the paperback see the  link above.