Jeff Koons – as enticing as a box of Turkish Delight 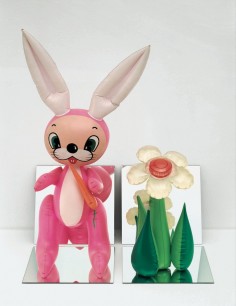 – but how much can you swallow in one go? Robert Radford opens the sweetbox

‘I like the intensity that art brings…like a good cocktail.’

Jeff Koons is, in market terms, the most successful artist in the world - his Orange Balloon Dog sold recently for $58 million. He hit the ground running as a young artist in New York in the 1980s with bright, fashionable ideas that exactly matched the confident, consumer-led mood of the time. Since then he has maintained production on an ambitious scale that has won a global following. In 2015, he will be 60, which might be considered a good point to take some measure of his views on art.

But what we get from this series of conversations is at times rather frustrating. He has taken possession of certain terms, such as ‘abstraction’,  ‘metaphysical’, ‘transcendent’, etc., and blessed them with his own personal meaning.  He sometimes sounds as though he has absorbed the language of ‘self-help’ literature; the motivation of art, he affirms, is ’the removal of anxiety…of any kind of guilt or shame’.

One potentially interesting aspect of his work is his frequent reference to and incorporation of imagery and statuary from Classical Greece, the Renaissance and the Baroque, but any depth or complexity that this issue might suggest is oiled away in a kind of marketing speak: ’My work enjoys going backward to embrace the resources of the humanities and to make connections that bring about enlightenment‘.  But then, on other occasions, he reveals the keen eye of a practising technician, of an artist who has looked carefully at art in the museums, remarking on the chisel marks on the dog in Bernini’s Rape of Proserpine, for example.

Although described as conversations, it is debatable how much that term actually applies. The eminent curator, Norman Rosenthal,  readily contributes suggestions from art history and anecdotes derived from his experience in the art world but these leads are rarely taken up by the artist, who always steers the subject round to his own agenda. Rosenthal does not seek to confront him with any challenging questions about the implications of wealth and celebrity, but probably because he realizes that any such questions would be as adroitly evaded, as when he attempts to pin Koons down on his exact meaning of such terms as ‘subjectivity‘.

But maybe the world of Koons is as straightforward as he claims. One might, for example, take him absolutely at his word when, referring to such pieces as Michael Jackson with Bubbles, John the Baptist  or the statuette of Bob Hope, he complains that ‘people use art to disempower people…they are the holders of the rules…I wanted to let people know that everything in their cultural past is perfect.’

Again there might not be any need to doubt his sincerity when he talks about the gendered (he calls it ‘sexual’) nature of art and the need to communicate to both sexes. He particularly likes his inflatable lobster for its combination of both male and female elements.

On less controversial questions, for example, about his family background – ‘there was always a sense of upward mobility’ – he responds openly and warmly. Revealingly, he recalls the impression made on him as a child by a book on Salvador Dali, whom he later, aged 18, phoned up and arranged to meet in New York, deciding then that this was the model of successful, well-dressed artist that he wished to follow. He offers glimpses of his early years as a young artist, touring around America’s home-appliance stores, buying up particular models of a Hoover that had been discontinued.

So, perhaps few insights are revealed in all these conversations; never does his guard slip, but this is probably because his soaring self-confidence and guise of affability disposes of any need for guardedness in the first place. Do not expect any of the laconic wit and irony of a Warhol, for example. There is no irony here.

The book is copiously and enticingly illustrated - but, rather like a box of Turkish Delight, it should not be consumed all in one go!