Degas and Cassatt: A partnership in Impressionism 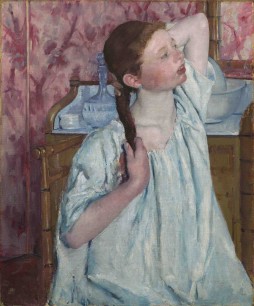 These two Impressionists had a long but problematic friendship, explored in this new book

Last year’s exhibition at the National Gallery of Art, Washington DC traced the partnership between Mary Cassatt, the young American painter who arrived in Paris in 1866, and Edgar Degas, the older French artist, who was a founding member of what became known as the Impressionist group. The thorough and well-illustrated catalogue documents recent research and presents ideas concerning the connection between the artists.

Mary Cassatt (1844–1926) had already trained in Philadelphia before emigrating to Paris. It was usual for American painters to complete their training in a European atelier, usually in Paris or Munich, even if they wished to practice in their home country. So when she encountered Degas in the 1860s, the American was experienced and independent yet also keen to absorb the latest developments in advanced art.

Edgar Degas (1834–1917) was ten years ahead of Cassatt, though he had spent many of his early years struggling to reconcile his classical training with a commitment to make art more contemporary, following the trail blazed by Courbet. This tension between a classical outlook and a desire to portray lived reality was the wellspring of Degas’s art.

It was at Degas’s insistence that Cassatt was included in Impressionist group exhibitions, starting 1877. They collaborated on a journal of artists’ prints titled Le Jour et la Nuit, a project that was abandoned before launch. Their unused prints are included in the catalogue. Both artists were accomplished printmakers, though Cassatt’s best prints (and perhaps her greatest accomplishments overall) were colour prints made under the influence of Japanese woodcuts. These were executed in the 1890s, at a time when she and Degas were no longer seeing each other regularly.

The exact nature of the relationship of the pair is unknown, though it does not seem to have been romantic. Degas preserved none of Cassatt’s letters and was rather reticent in general, leaving no diary or memoir. Cassatt is thought to have destroyed Degas’s letters to her, possibly to obscure any debt which she owed the older artist. In later years she was ambivalent about Degas, selling her Degas pictures and downplaying their association. When she wanted to dispose of a Degas portrait of her, she wrote to the dealer Durand-Ruel:

It has artistic qualities but it is painful and depicts me as such a repugnant person, that I don’t want anyone to know that I posed for it. […] I would prefer that it be sold abroad and certainly without my name attached to it.

Cassatt modelled (clothed) for a number of paintings aside from the well-known composition Mary Cassatt at the Louvre: The Paintings Gallery (1885). As some of the pictures of milliner’s shops include figures with partially obscured faces, it is difficult to precisely identify figures as Cassatt. Cassatt was unwilling to divulge which pictures she actually modelled for, possibly because she did not wish to appear subordinate to the more famous male artist.

Knowledge of the works that they exchanged and bought is informative. She bought one of his most unconventional bather pictures and he acquired one of her finest paintings: Girl Arranging her Hair (1886). In it Cassatt employs Degas’s dry brushwork and careful drawing, eschewing her usual juicy wet-on-wet painting technique. So bold and Degas-like is the painting that it was briefly misattributed to Degas by the executors of his estate. It is no wonder that Degas acquired the painting for his own collection. One omission in the book is a table of all works by Degas and Cassatt owned by the other artist, with information about acquisition dates and the current locations of the pieces. That would have allowed us to reconstruct what the pair were looking at and when.

The exhibition included the National Gallery’s own Little Girl in a Blue Armchair (1878) by Cassatt. Cassatt showed the painting to Degas and asked for advice. He altered the background layout. Cassatt followed his suggestion and made alterations after his intervention. His brushwork can still be seen in the central window and adjoining wall.

A particularly interesting essay by Erica E. Hirshler and Elliot Bostwick Davis describes how Cassatt acted as intermediary and adviser to American collectors of Impressionism. As an insider based in Paris, Cassatt could tip off the Havemeyers, Popes and Palmers about newly available work by Degas. Her contacts and shrewd eye helped the Havemeyers to build the world’s largest collection of Degases (64 pictures, 70 bronzes and numerous graphics), most of which were left to the Metropolitan Museum of Art, New York. Her assistance allowed Degas’s work to enter American private collections (and later museums) and thereby spread his influence and secure his international reputation. The American collectors also acquired work by Cassatt.

Catalogue essays cover aspects of the partnership in detail, including printmaking, collaboration and images of Cassatt by Degas. Amanda T. Zehnder suggests”

Cassatt’s involvement [in the printmaking process] was somewhat extraordinary: a single female artist in late nineteenth century France engaged in a messy, labor-intensive, technical process with older male artists connected to a then-radical art movement. The degree of independence she asserted is well worth noting.

Reasonably so, but it seems more a matter of class boundary-crossing than gender boundary-crossing. After all, female laundresses, cleaners and farm labourers were all commonly found during the era. American art historians, especially female ones, have emphasized gender issues, at times at the expense of class issues.

Those interested in these two artists – and the history of Impressionism more generally – will find this handsome volume makes an enlightening and enjoyable addition to the literature.