Michelangelo, from David to the Sistine ceiling 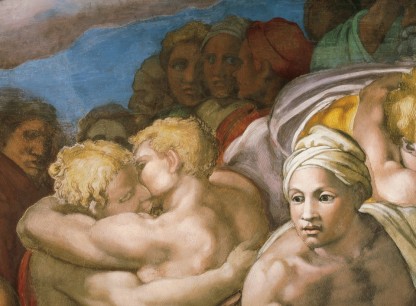 ‘This beautiful and invaluable book is also the record of a crime scene’, says Alexander Adams

There are few works of art as famous as Michelangelo’s statue David (1501–4) and his Sistine Ceiling (1508–12). What is remarkable is that the artist who created these pinnacles of artistic achievement did so in two completely different disciplines: sculpture and painting. Yet beyond that, Michelangelo (1475–1564) was also a great architect and draughtsman, as well as being an accomplished poet. During his lifetime he was regarded with almost divine reverence, a genius who straddled divisions between art forms. He became the most famous artist in Europe, hugely influential and as rich as a prince. Jealously secretive and extremely proud, the artist concealed his private life and erased evidence of his labours.

Michelangelo: The Complete Works documents almost everything by the master that survives in paint, stone and on paper. It is a wonderful treasury of some of the masterpieces of world art in drawing, painting, sculpture and architecture. This heavy, large-format hardback book comes in a slipcase that forms a sturdy book stand – a practical measure to prevent damage to the binding. Divided into thematic and chronological sections, the first half of the book traces Michelangelo’s origins in Florence, early triumphs and the later Roman projects under princes and popes. The second half catalogues the artist’s sculptures, paintings, drawings and architecture in discrete sections.

Michelangelo wished to conceal his workings and evidence of effort so as to make his finished works seem complete and perfect – a symptom of the artist’s pride and his philosophy of art. Hence he destroyed many of his drawings. Perhaps half the figure drawings in this book are copies by pupils of lost originals. There is little consensus on which are original Michelangelo drawings and which are copies, though most of the architectural plans are agreed to be original. Zöllner presents his general views and variously attributes 535 drawings, though there is not space enough to explain his reasoning (which would have been a mammoth task). The drawing section includes sketches for paintings and sculptures, highly finished presentation drawings, life studies, anatomical illustrations, architectural designs and lists and dimensions of blocks of stone.

Beginning with his early bas reliefs and imitations of the antique, the sculptures include Bacchus (1496–7), the ground-breaking Pietà (1498–9) and the Bruges Madonna  (1505–6). The cardinal project of Michelangelo’s career was the tomb for Julius II, which occupied him for most of his working life, from 1505–45, and was never finished to the artist’s satisfaction. Diverted by arguments over money and ordered to work on other projects, Michelangelo never realized his original grand design, incorporating architecture and multiple figures. Scaling down of the project meant that a number of sculptures were not started; others were left unfinished and/or later dispersed, which is how the two famous Slave figures (c. 1513–6) came to be in the Louvre today.

Overall, the authors tread a moderate path for attribution and make no controversial inclusions. In the painting section, the authors have (rightly) omitted several stiffly painted panels assigned (rather optimistically) to Michelangelo but which were probably by followers or pupils, based on his designs. The ink drawing Study of a Mourning Woman, discovered in Yorkshire and which sold at auction in 2001 for £5.9m, is widely acclaimed as authentic and is a significant addition to the canon, so it is a peculiar omission from this volume.

The full-page illustrations are of such a high standard that one can see the brush marks in the frescoes and chisel marks on the stone. The detail is so great that pounce holes are visible, showing where Michelangelo (or an assistant) pricked through the paper cartoon to transfer outlines of elements on to fresh plaster to guide his painting. The fold-outs are especially useful when studying the layout of the decorative frescoes. The book format allows one to flick between overall views and details, with summaries identifying the figures in the frescoes and explaining their significance. The Last Judgment (1536-41) on the wall of the Sistine Chapel has numerous figures from the Christian tradition and pagan mythology, which need to be identified for viewers to comprehend the scene.

The only significant issue that the authors fail to address is the effects of the disastrous cleaning of the Sistine frescoes over 1984–94. Years of dirt and soot (and some minor repainting) disfigured the frescoes, however – against the warnings of experts and historical evidence – the restoration team adopted an intensive procedure which failed to take into account Michelangelo’s practice of correcting and amplifying elements after paint had dried. As a result, the restoration removed dirt but also most of Michelangelo’s corrections. Details were erased and figures lost some of their dramatic sculptural presence, becoming washed out and flattened. Although there are some pre-restoration photographs included for the purposes of comparison, the authors do not point out that the current scoured state of the Sistine Ceiling is not how the artist intended it to be seen. For those critical of the skills and motivations of less assiduous restorers, this beautiful and invaluable book is also the record of a crime scene.