When fashion was rationed 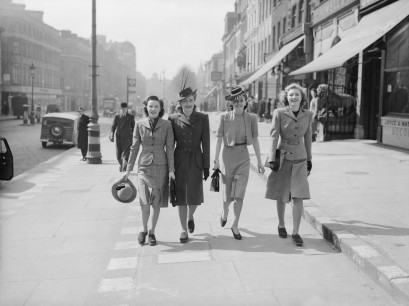 From controversial clothes rationing, to the demob suit, and the advent of trousers for women, a new exhibition charts the lasting effect war had on Fashion in 1940s Britain...

The black and white photograph of the smiling women walking along a London street in the Spring of 1941 could have come straight out of my family's album. Their elegant tweed suits with padded shoulders, nipped in waist, and slim-line knee-length skirts, echo the image of my mother in her own similar wartime suit, pictured with my father on their honeymoon in Torquay.  It is a treasured photographed, the happy couple, so carefree, showing no hint of the hardships that affected much of Britain during and after the Second World War.

That people carried on with normal life wherever possible and kept up appearances no matter what, is among the many fascinating revelations in a major new exhibition marking the 70th anniversary of the end of the Second World War in 1945, at the Imperial War Museum, London.

‘Fashion on the Ration: 1940s Street Style’ is not just about the affect the war had on fashion, it is also an insight into the social history of the time. It uses dress to show the effects of wartime restrictions and shortages in Britain.

There were almost three million men serving in the Army making it the largest of the British armed forces (soldiers were often referred to as ‘brown jobs’ after the khaki colour of their uniforms), and nearly 800,000 in the Royal Navy. Women also served: 250,000 of them were in the Auxiliary Territorial Service  (ATS). These women soon discovered that a new pair of stockings, being in very short supply, was only issued once the current pair could no longer be darned or mended again.

In the early stages of the war there were not enough resources to provide uniforms for the millions of volunteers so armbands were issued to identify those serving their country: some 1.5 million for the Local Defence Volunteers (LDV), renamed as the more inspiring Home Guard on Winston Churchill's insistence; as well as hats for the Women’s Voluntary Service (WVS), and Lapel Badges for ordinary sailors in the Merchant Navy who, unlike the Officers, did not wear uniform.

Even for men and women not in uniform, wartime life changed the way they dressed at home and at work. It became increasingly important for clothes to be practical and stylish. Retailers sold innovative, fashionable products, such as gas-mask handbags, blackout buttons and siren suits, 'a fashion innovation, which could be pulled on if the wearer had to rush to the air raid shelter', and a forerunner to today's cat suit or 'onesie', endorsed by Winston Churchill and women alike. Even Vogue ran an advert for siren suits in their November 1940 issue declaring it 'respond(s) to a profound need of mind and body, to be warm, safely enclosed against fear and danger no less than against night frosts.'

Reacting to the blackout and government advice to 'wear something white' shops soon also stocked a range of luminous accessories from buttons to bags to brooches.

During the first four months of war the price of clothing shot up by 18 per cent, and although clothes were still available in the shops, in June 1941 clothes rationing was introduced which was to change the shopping habits of the nation. The system was so flawed it made clothes shopping both more expensive and complicated.  One woman, Flo Hyatt wrote to her aunt: the summer sales are now on over here but people are nervous about buying things because of their 'coupons'. I spent three of my precious coupons on collars and cuffs and now they have been struck off the list...

There were limited opportunities for buying new clothes so people made their clothes last longer by patching and mending them. They used fabric from old ones to make something new and knitted new things. There are 300 items in the exhibition, illustrating how resourceful they were. Parachute silk was used to make a bridesmaid's dress, and aircraft components were made into a bracelet. There is a child's cloak made from a blanket, and even a bra and knickers set made from RAF silk maps, which belonged to the Countess Mountbatten.

The rationing system was at first perceived as unfair. The Government spearheaded a successful national 'Make do and Mend' campaign and introduced Utility Clothing to address the problems. Production was standardized: only a limited range of quality-controlled fabrics – cotton, rayon, elastic, and lisle – were allowed.

As clothes became more expensive and scarce people were anxious to protect and preserve those they already had.  Most families in the 1940s had very few household appliances, so everyday chores such as cleaning, cooking and laundry could be dirty and time-consuming. To protect their clothes many women wore an overall or housecoat, often in pretty prints that would not look out of place in some of our high street shops today.

They were worn for factory work, too, where women were playing an increasingly important role on the production line as their men went to war.   One of the lasting impressions of this exhibition is the lengths to which women went to maintain their personal appearance. Whether working on the factory floor, the land, in the armed forces or as a volunteer, they always did their hair and make-up and were encouraged to see 'Beauty as a Duty'.

Magazines ran helpful beauty features, such as advising women to make lipsticks last longer by melting down the ends and packing the paste back into an empty case, or using beetroot juice to stain the lips. Shades were often given military names such as Helena Rubinstein's 'Regimental Red'.

The Second World War changed how women dressed forever in one major way as the trend for functional fashion meant that women now wore trousers. Although some remained dubious about 'slackers in slacks', trousers for women became widely accepted throughout the 1940s.  Retailers and manufacturers, from Fortnum & Mason to Lillywhites, were quick to exploit this new fashion and women's magazines featured these new 'outre' styles.  Fashion-wise women have never looked back and the influences are still evident on the high street today.

SEE Fashion on the Ration (book) ON AMAZON

The book accompanying the exhibition, Fashion on the Ration: Style in the Second World War by Julie Summers, £18.99 hardback, is published by Profile Books.