Forging ahead: art and deception 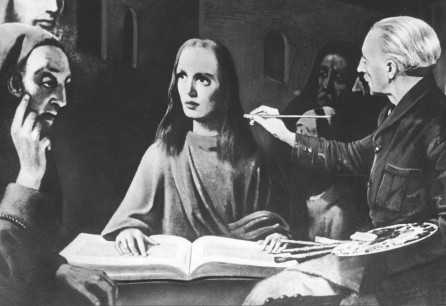 Do you really want to know the truth? Or would you rather believe that painting you found in the attic is a Rembrandt?

The Art of Forgery by Noah Charney

Noah Charney’s book The Art of Forgery opens with the words ‘the world wishes to be deceived’ and concludes with ‘let it be deceived’. Translated from Petronius’ ‘mundus vult decipi ergo decipiatur’ this concept of deception is brought to our attention from the start. Staring up from the front cover is a mirrored image of Vermeer’s The Girl with the Pearl Earring. Initially the two images appear identical; however, looking more closely the lower image is unblemished whilst the upper has a network of cracks across the surface. Which is the original? Which is the copy? We are immediately deceived. ‘Don’t always believe your eyes’, written on the dust jacket, couldn’t be more fitting.

The book introduces the reader to the minds, motives and methods of master forgers. It tells stories ranging from the Renaissance, where the skill and technical mastery of copying and replication was considered an intrinsic part of the teaching process, to the 20th century where artists sought fame, took advantage of an opportunity or sought revenge on the art world that dismissed and ignored their own works. The sensationalist bold-type chapter headings: Genius, Pride, Revenge, Fame, Crime, Opportunism, Money and Power read almost like a list of the seven deadly sins, but in this instance reflect more the eight motivations for forgery.

These short case studies essentially offer a compendium of forgery. They are supplemented by images of the original works and their copies, and provide pertinent examples of instances of forgery that operate as an embarkation point for further reading and investigation. Perhaps they lack some depth, generally being nuggets of information no longer than five pages in length, but this does make them easily consumable and gives the book a pick-up-and-put-downable appeal.

This property differentiates the work from Charney’s fiction. In The Art Thief the fast pace keeps the reader on edge, making it readable in one sitting, whist simultaneously throwing out educational morsels about art materials, techniques and topics such as iconography and symbolism within the fictional narrative. However, whether writing fiction or non-fiction Charney’s writing style does not deviate, consistently offering plenty of humour: ‘revenge for these forgers is a dish best served at auction’, and always building suspense and intrigue, ‘how thin is the line between artist genius and criminality’, perfect for the secret world of forgery.

Michelangelo as a forger is the first Renaissance artist brought to our attention through his copies of Roman antiquities. The account focuses on his copy of Sleeping Eros of 1496 that he sold to Cardinal Raffaele Riario, the grandnephew of Pope Sixtus IV as a Roman original after carefully aging the sculpture during its production. Charney swiftly moves onto the Baroque painter Giordano who produced works in the style of Durer, and even passed off the work Christ Healing the Sick as a Durer original. Other notable names form the subject of subsequent case studies revolving around misattributions on the part of artists, dealers and experts of works by Dali, Warhol and Da Vinci.

The compendium is not limited only to artwork forgery. ‘Genius’ draws attention to the Renaissance-style jewellery created by Vasters in the 1850s. The originals could not be differentiated from the ‘Vaster originals’. In ‘Power’, literary and manuscript forgeries are the topics of examination, including the private ‘diaries’ of Adolf Hitler. In ‘Money’ even wine forgery, which we learn, rather unexpectedly, is a common phenomenon, finds itself under scrutiny: a bottle alleged to be a 1787 Chateau Lafite Bordeaux owned by Thomas Jefferson is considered.

The author delves into some of the most famous forgers in history, including Van Meergeren, Greenhalgh and Keating.  Hebborn, considered the most skilled art forger of all time, is given the most attention. His seminal text The Art Forgers Handbook has served as a forger’s bible, with its tips and tricks for forging artworks and even offering a list of essential ingredients for a forger’s kitchen – including breadcrumbs to act as an eraser, milk as a fixative for chalk and tea to tint paper giving an aged look for authenticity. Museums such as the Getty and the British Museum that have suffered from purchasing such forged artworks are given attention in the book, as are the individuals who have hunted forgers and detected forgeries, often through processes of scientific analysis.

The book on the whole is enjoyable, if a little short on detail and depth of discussion. However this is easily remedied. If you want to read more deeply into a particular case study, that you have been introduced to by Charney, you can. There are plenty of texts out there for further study, about forgers, by forgers and for forgers. In fact, Charney helps with this himself. The Ghent Altarpiece, famous for being stolen more times than any other artwork, is mentioned very briefly in the book but forms the topic of a separate book by Charney: Stealing the Mystic Lamb. The Art of Forgery does what it says on the tin; introducing the reader to the world of forgery, making it accessible for all and offering the opportunity to delve deeper if your interest is piqued.

The Art of Forgery