The Barbican: the city's outer defences of culture 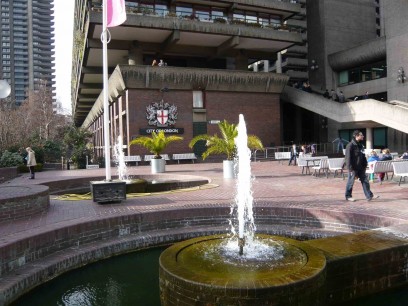 I still think that the uniqueness of Barbican, one building owner, one set of architects and consultants, one compact high density whole providing for man in one place most of the things you would find in a whole city is a point worth making. No one else has attempted it on such a scale and so wholeheartedly.

Geoffry Powell, architect, one of the three partners of Chamberlin, Powell and Bon, the firm that designed the Barbican complex, in a letter to architectural historian Elain Harwood, 1989.

Years ago, we were invited by one of my husband’s colleagues to dinner at his flat in the Barbican, an ‘iconic’, considerably Brutalist upmarket social housing estate in the City of London, commonly referred to as the capital’s financial district. Both our hosts, Robert and his wife, were lawyers. They had two school-age children. We wondered how they could bring up children in such a foreboding, fortress-like atmosphere. We felt that children’s bedrooms should overlook a leafy garden near a park with nature trails, instead of blocks of raw concrete and a maze of ‘pedways’.  But recently, when we moved to a house near the Barbican, and began visiting the complex regularly, we came to regard the children as fortunate for having the experience of living there, assuming they also would have had opportunities to enjoy rural life and realize that eggs are not laid in boxes.

Ironically, the Barbican complex of sublime urbanity offers many of the hallmarks of a traditional village. One could consider it a thriving suburban community within a city, or a micro civic society.  We might attribute the personal quality of jolie laide to the Barbican. For its internal life brings great pleasure to many residents and visitors; architecturally and in a cultural and historic context, the Barbican is full of living riches. First impressions may condemn the complex as visually harsh and aggressive, as Brutalist architecture is often regarded, but a more penetrating look should make one appreciate that the Barbican encompasses other architectural styles and innovations, which add warmth and even whimsical touches. It’s not all reinforced undressed concrete.

Architectural elements include an imaginative use of geometric shapes, including the cylindrical, circular and tube-like, and thin, white concrete shells atop the terraced blocks, fragments of the old City wall, originally Roman but surviving from Tudor times (indeed, the word Barbican, historically referred to a fortified outpost or gateway, the outer defence of a city or castle), 18th- and 19th-century grave slabs incorporated within raised paving around the church, a gatehouse-like brick staircase tower with slit windows and a crenellated wall shielding private gardens. Point tooled concrete surfaces add further character, suggesting a monolithic quality, reminding me fleetingly of Mycenaean ruins. In 2001 the complex was Grade II listed by English Heritage (now called Historic England).

The Barbican covers the site of late 19th-century industrial warehouses and businesses once engaged in the ‘rag trade’, which involved the buying and selling of cloth, tailoring and dressmaking. The area was bombed in 1940, leaving a vast pit of rubble and ash, colonized by weeds and wildflowers. In the 1850s, the population of the parish of Cripplegate, where the Barbican is now situated, was 14,000. Over one million people lived in the City of London. In 1951, Cripplegate was home to 48 residents, while the entire City of London’s population was 5,324.

After the Second World War, the land where the Barbican would lie was valuable, ripe for commercial development.  But the local government – the City of London Corporation – was concerned that if the land were given wholly over to office development, in the evenings and weekends it would be soulless in both body and spirit. It was open to new ideas.

One of the architects under consideration at the time, Peter Chamberlin, reasoned that a residential scheme would ‘turn this desert into a garden’. The financial return would be promising if the scheme entailed exceptionally high density and was aimed at a middle or high-income bracket, not those on council waiting lists and those evicted by slum clearance schemes. Chamberlin argued effectively. The partnership of Peter Chamberlin, Geoffry Powell, and Christof Bon was eventually chosen to design the complex.

The firm had an established pedigree in the immediate area, having designed the adjacent Golden Lane Estate, which was built in the 1950s. The partnership had been created as a result of a pact made between the young men. They had agreed that if any of them won the competition to design the Golden Lane, they would form a partnership and carry out the commission. There were 178 entries. Powell was the ‘golden’ winner.

The much smaller Golden Lane Estate lacks the forebidding aesthetic of the Barbican; it is more colourful, verging on the picturesque. Sunken gardens were created in the excavations of what were once warehouse basements. There are low-rise blocks with curtain walling of red and blue panels and one tall block featuring curtain walling with bright yellow panels.  It is slightly reminiscent of children’s primary-coloured wooden building blocks. Useful shops line the fronts of Crescent House, which faces Goswell Road, a main thoroughfare. Within the Estate are a community hall, sports hall and leisure centre. The flats are less expensive than those in Barbican. The Estate was Grade II listed in 1998.

After years of debate and planning, initiated in the 1950s, construction (between 1963 and 1982) and subsequent changes, the Barbican complex encompassed just over 2000 residential units contained in three tall towers (once the tallest residential towers in Europe), 14 long terrace blocks, some houses and two mews, homes for some 4,000 residents, plus garages, servicing and commercial premises, complementary private and public open spaces, the latter enhanced with a two-acre ornamental lake, and a moat.  In addition the site includes a highly rated day school for girls, The City of London School for Girls, the revered Guildhall School of Music and Drama, fitness facilities, a restored mediaeval church, St Giles of Crippelgate, and a labyrinthine complex of multi-level walkways and bridges. The complex is traffic free. And, yes, there are play areas for children and spaces for playing basketball, tennis and football.

Another thriving asset on site is the 10-storey-high, five-and-a-quarter-acre arts, conference and exhibition hall scheme for which building started in 1971, and which was officially opened by Queen Elizabeth in 1982. This includes a public library, a concert hall, two theatres, including The Pit – an 164-seat studio theatre – three cinemas, restaurants, cafes, and a wondrous conservatory (built as camouflage for the fly tower of the main theatre) with over 2000 species of plants and trees, an aviary and small lake stocked with tropical fish.  There are no aisles within the main theatre seating 1156 people; for each row there is a separate entrance, and the overhanging circles contain only two rows of seats. The Barbican Arts Centre is home to the London Symphony Orchestra and was once the home of the Royal Shakespeare Company.

To reduce the degree of vibration in the ground, and thus to the flats and the arts centre, the railway tracks of the Underground were mounted on rubber bearings. The electricity cables, telephone wires and waste disposal systems are routed through three miles of underground passages. There are 23 acres of open space, including 12 acres of sometimes confusing public walkways. The overall area is 40 acres.

The names of the blocks of flats and mews refer to notable historic people who have lived in the area. Hence we find Ben Johnson House and Bunyan Court, named after the author of the Pilgrim’s Progress who is buried in the nearby Bunhill Fields and preached locally. Speed House is named after John Speed, a member of the Worshipful Company of Merchant Taylors, an historian and cartographer who produced a series of maps of the counties of England and Wales. He is buried at St Giles church. John Trundle Court is named after a stationer who had premises in the Barbican area and published, together with another fellow bookseller, Nicholas Ling, the first quarto of Shakespeare’s Hamlet.

There is a glossy magazine called Barbican Life for the residents. Leases are sold on a long-lease basis. Tenants have the right to buy. It is forbidden to hang one’s washing on the balconies, or to install wooden flooring, which allows footfall noise and could hinder the operation of the under-floor heating.

We tend to associate the aggressive, raw look of concrete high rises with a desolate social housing environment, feeling ashamed by the aesthetics of what we offer those in need. But the Barbican, albeit a predominantly muscular Brutalist concrete complex, proves that if Brutalist architecture is well maintained and punctuated with inspiring landscaping, social and cultural facilities, and contrasting architectural elements, it can be the raw material for contented family living, regardless of the size of the household budget; and never will it be  a commuter’s dormitory.

READ Chamberlin, Powell & Bon – The Barbican and Beyond by Elain Harwood,

There are 90-minute walking tours of the Barbican.. The one Jenny went on was excellent and very thorough.
Click here for information about opening hours for the Barbican conservatory

Brutalist architecture, a modernist style, flourished in Britain during the 1950s until 1970s. The term is derived from the French beton brut or raw concrete, an expression used by Le Corbusier to describe his choice of material. It stylistic use became popular with government and institutional clients undertaking social housing, shopping mall and educational projects.
Scale is defining: examples have a monumental, fortress-like character; building shapes are geometric and unadorned; concrete dominates, though there are brick-based examples as well. The windows may seem small in relation to the other parts. Brutalist architecture is meant to convey a sense of strength, function, and determination, rather than lightness and movement. It is sometimes seen as anti-bourgeois because of its stark lack of ornamentation and frivolity, traits simplistically associated with those with money and time for leisure and self-indulgence, a lack of concern for the ordinary man. In London, The National Theatre, designed by Sir Denys Lasdun, Trellick and Balfron Towers, designed by Erno Goldfinger, and Robin Hood Gardens (now threatened with demolition), designed by Alison and Peter Smithson, are prime examples.