Liotard: the great artist you have never heard of 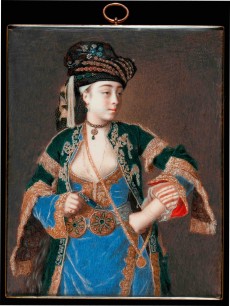 Never heard of Liotard? You’re not alone. To quote Christopher Baker, director of the Scottish National Portrait Gallery and one of the exhibition’s organizers, ‘Liotard is perhaps one of the greatest artists that most people have never heard of’.

There are many reasons for this neglect. Liotard came from Geneva, and as citizen of a republic did not make his way in the art world through royal patronage. He also travelled widely, and never belonged to any one national school of art. Many of his portraits are low-key in approach, and have remained in private hands rather than public collections. And some of his works were (by the standards of his day) downright eccentric, and he himself was famously – nay infamously – eccentric in his self-presentation, dress and demeanour, so it was difficult for his contemporaries to categorize him.

Liotard travelled a great deal. He left Geneva to study in Italy, and then went on to Constantinople in the train of British Grand Tourists, staying for some four years. There he recorded local culture as well as painting portraits of the British (several of which are on show) and he started to wear local costume and to grow the long, dramatic beard that in London earned him the nickname of ‘The Turk’.  From time to time his work displays a knowing, ironic wit, particularly in his self-portraits. Some are serious and reflective, but his Self-portrait Laughing(c.1770) is both an essay in self-mockery and a lively piece of marketing. It shows the artist pointing out beyond the picture, grinning like a gap-toothed clown, when most artists would show themselves with paint brush or pencil in hand. He took this portrait with him on tour to Paris, London and the Netherlands.

Liotard was better known to his contemporaries than we might think. His delicate portraits, particularly his works in pastel, were highly admired, and he received commissions from rulers across Europe. In an age when royal portraiture was formal, grand and elegant, the sitters shown in stock poses and with formal expressions, Liotard’s portraits came as a welcome contrast. They were usually small and intimate, allowing the sitters’ personalities to shine through. This made them popular, albeit destined for private enjoyment rather than public display.

Typical of this approach are his charming and frank portraits of children, such as that of Princess Louisa Anne (1749–68) in the British royal collection. Liotard here demonstrates his consummate mastery of the medium of pastel. The little princess is the personification of innocence, looking at the viewer with wide-eyed surprise. She sits on a huge chair that serves to emphasize her small size and vulnerability, and her dress has slipped down at the front to reveal a nipple – hardly the content of a typical royal portrait!

Another pastel portrait of a little girl, that of Liotard’s own daughter Marianne, features on the front cover of the catalogue. She is shown with her doll, her finger held up to request silence as the doll has gone to sleep. In this, as in some other works, the influence of Jean-Baptise-Simeon Chardin is very evident.

Liotard worked in a range of media, from chalk drawing to oil painting, pastels to enamels. His miniatures are exquisite, in fact he could probably have made a successful career working solely as a miniaturist. He experimented widely in various media and differing supports (canvas, paper, vellum, silk) but is best known for his work in pastel, a medium that had become very popular during his lifetime, particularly in France. Pastels are made of powdered pigments bound with gum, shaped to form sticks or crayons. When used by an expert hand they can produce great subtleties of tone. Liotard used them as smoothly as possible, the individual strokes almost invisible.  His superlative skill in the medium enabled him to convey the illusion of textures very realistically, from the delicate fabrics of his sitters’ costumes to the luminosity of fruit in a dish.

The exhibition was shown at the National Gallery of Scotland, Edinburgh, until 13th September 2015, but is moving to the Royal Academy of Arts, London, from 24 October 2015 to 31 January 2016. The scholarly catalogue, published by the Royal Academy of Arts, includes an excellent biographical and critical account of the artist’s life and work, together with over 80 catalogue entries, detailed endnotes, a chronology, a bibliography and an index. It is welcome to see Liotard receiving the recognition that he so fully deserves.